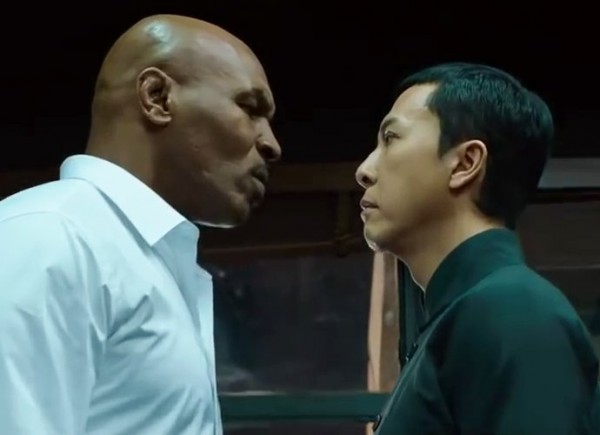 Ip Man 3 still packs a punch and is a fitting ending to one of the all-time great kung fu trilogies; with stellar performances from the majority of the cast and breakneck action it won’t disappoint fans of The Grandmaster himself.

Plot: In this explosive third installment of the blockbuster martial arts series, when a band of brutal gangsters led by a crooked property developer make a play to take over the city, Master Ip is forced to take a stand. Fists will fly as some of the most incredible fight scenes ever filmed play out on the big screen in this soon-to-be classic of the genre.

Review: I’ve been counting down the seconds until I got to see Ip Man 3 as the first two starring Donnie Yen are some of my favourite movies; I’m pleased to say that the third and possibly final Ip Man film (at least starring Yen) is a worthy finale making this one of the greatest action trilogies of all-time.

As I’ve mentioned in my reviews for the other two movies, Donnie Yen plays Master Ip Man with quiet grace and a calm smile. He will never start a fight but won’t back away from one either, especially when he sees others are in danger. In this case his local school when its students and staff are being harassed by a gang of thugs who work for a local property developer played by Mike Tyson.

When I first heard of his casting I certainly thought it was strange; there’s no denying Tyson can fight but how would he hold up acting on screen? I have to say he isn’t too bad; he won’t win any awards but he still manages to come across as an intimidating presence and his story didn’t quite go the way I thought. He’s a little underused and I would have liked to see a bit more but sometimes bigger isn’t always better.

The PG-13 rating isn’t really the death knell we were worried about either; although you do notice a distinct lack of blood during the many fight scenes, they are still brutal and effective. The choreography from master Yuen Woo Ping is everything you’d expect and although there is some wirework it’s literally only once or twice and doesn’t detract from the action.

Ip Man 3 manages that rare feat of being action packet yet full of heart as Master Ip cares for his dying wife Cheung Wing-sing, played with great tenderness by Lynn Hung. She’s wonderfully fragile in these movies and she and Ip Man totally adore each other. In this story though Cheung Wing-sing begins to feel sidelined as Ip Man tries his best to protect the local school and its students.

The music is another highlight as it maintains the classic Ip Man theme tune while pulling at the heart strings during the more intimate scenes between Ip man and Cheung Wing-sing.

Jin Zhang’s role as Cheung Tin-chi is an interesting one as you’re never quite sure if he is good or bad or what his motivations are until the second half of the movie.

Kwok-Kwan Chan was spot on as Bruce Lee and he had all his mannerisms down to a tee; it’s a shame we don’t get to see more of him in these films but I believe that’s due to legal reasons.

Overall, Ip Man 3 still packs a punch and is a fitting ending to one of the all-time great kung fu trilogies; with stellar performances from the majority of the cast and breakneck action it won’t disappoint fans of The Grandmaster himself.