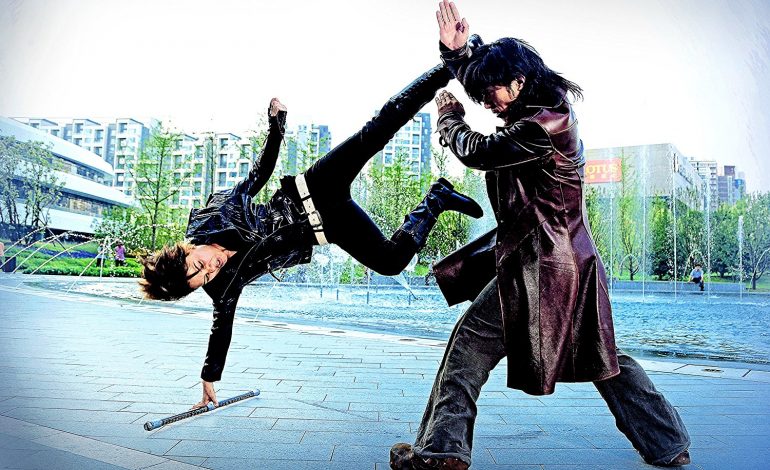 Despite the false advertising Iron Protector is an entertaining martial arts romp with Yue Song proving he has what it takes to be the next badass on the block and I look forward to seeing what he does next.

Plot: After the death of his clan master, Wu-Lin leaves the village for the City of Stone-cold to protect the daughter of the richest family in the city, Fei-Fei. When the city’s most dangerous gang attempts to kidnap Fei-Fei, Wu-Lin is forced to fight them alone and discovers an even more sinister power is taking over the city.

Review: Iron Protector (or Super Bodyguard as it’s otherwise known) had one of the most exciting trailers I’d ever seen so I was pumped to sit down and see if it really was as trouser-dampeningly awesome as it looked. It isn’t, but there is still plenty to enjoy and it is packed to the brim with martial arts action.

My main issue is that the trailer blatantly lied to us: “No wirework” it said. My arse there was no wirework; you even see them using wires in some behind the scenes footage over the end credits so that was just false marketing. There is also a good amount of fast editing which admittedly works for the most part in creating a kinetic energy to the fight scenes which are still impressive.

The story is nothing to write home about as it’s pretty generic stuff but it does have a few twists in the story so we at least care about our protagonists. We’re not really interested in characterization and story though in a movie like this, are we? We want to see people getting the shit kicked out of them and for this alone Iron Protector is a winner. It barely goes 3 minutes without a fight scene and Yue Song never fails to impress with his martial arts prowess. The added addition of Colin Chou and Xing Yu only helps although is it possible for Xing Yu to be a good guy? Any time he comes on-screen in a movie you just know he’s evil an will betray someone at some point.

Yue Song has real screen presence too and brings some personality to the character of Wu-Lin; it’s difficult for a martial arts actor to break out because you can’t just have the moves but you need to have charisma and personality too. He doesn’t get to show that much in this role but you can at least tell it’s there and I see a bright future for Yue Song.

I thought the character of Fei-Fei was mildly annoying though and never really cared if the bad guys took her but as she (rather predictably) notices that there is more to her bodyguard than meets the eye she begins to thaw a little.