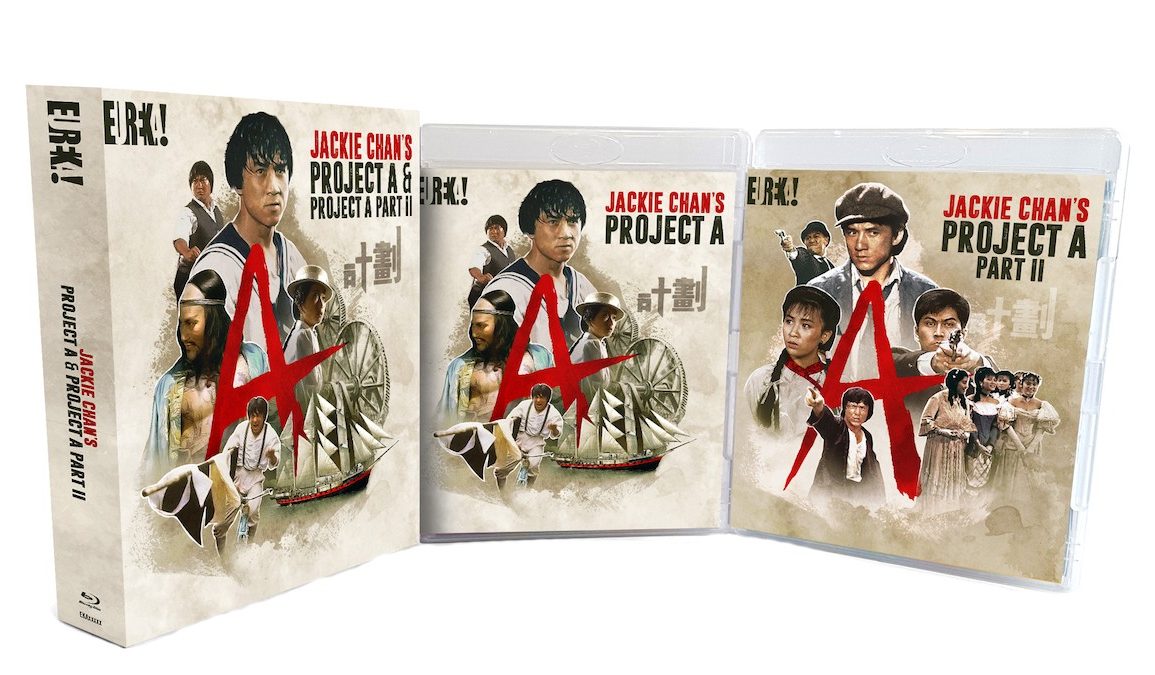 Project A is one of Jackie Chan’s finest hours and the second movie is not without its moments with plenty of action and stunts. Despite the lack of chapter selection for both movies Eureka have done a decent job of remastering them and giving fans plenty of special features to salivate over.

While in the UK recently I picked up the Eureka Blu-ray set of Jackie Chan’s Project A movies which I realised we had never reviewed before so now seems like a good time to do just that.

Plot: Dragon Ma (Jackie Chan) is a lieutenant in the 19th-century Hong Kong marines. Pirates have been terrorizing local waters, with assistance from the corrupt authorities. Dragon Ma hopes to defeat the evil pirate clan led by Sanpao (Dick Wei), but his plan is short-circuited. Ma then teams with a navy admiral (Hak Suen Lau), a police captain Tzu (Biao Yuen) and a crafty thief (Sammo Hung) in a new round of high-seas battles with Sanpao and his pirates.

Review: It had been a few years since I had watched Project A and I forgot how amazing the action is and it remains of Jackie Chan’s best pictures. It’s a wonder that Chan isn’t disabled or dead already as his dedication to stunts is incredible and when he was in his prime nobody could compare.

Project A wastes no time in getting going with a bar brawl that is both hilarious and exciting (check it out below) with some breathtaking choreography.

It’s hard to actually pick a favourite action scene as there isn’t a bad one in the movie but another highlight is the bicycle chase which once again has Chan doing all kinds of stunts which will have you laughing and cheering for him. Let’s not forget the supporting cast which includes Yuen Biao and Sammo Hung who are also incredible to watch as they each have their own particular set of skills.

It’s no secret that normally I don’t like when Chan goes into farce territory in terms of humour but with Project A I think he got the tone just right with just the adequate amount of laughs but never taking away from the drama of the action.

Jackie Chan was always influenced by the likes of Harold Lloyd and Buster Keaton and I think Project A is especially a tribute to Lloyd’s work in Safety Last where he hangs from a clock tower. Chan practically outdoes Lloyd by actually falling and crashing through three canopies in one of the most jaw dropping stunts of his career.

The fight scenes are never less than stunning and it’s a movie you can return to again and again to just bask in Chan’s greatness.

Eureka did a fine job with remastering the movie with stunning picture and audio quality and a host of special features including deleted scenes, cast interviews and many more. One thing I find odd though is the lack of Chapter Selection on the menu which is a pretty basic thing.

Overall, Project A remains of Jackie Chan’s best movies with some of the most breakneck action scenes you’ll ever see.

Plot: Corrupt police inspector Chun (David Lam) has made himself the most powerful law enforcement officer in Hong Kong by staging high-profile arrests of the criminals and mobsters with whom he’s in cahoots. The British authorities know Chun is a dirty cop but have not been able to infiltrate his inner circle. Enter fearless and incorruptible military policeman “Dragon Ma” Yun (Jackie Chan), who comes back to his hometown to pose as Chun’s new right-hand man and take down both cops and criminals.

Review: I always thought this would have made more sense to be called Project B but what do I know…

Anyway, Part II for me is inferior to the first movie in every way lacking the truly stunning set-pieces that made it such a classic. The story just isn’t all that interesting and this goes too far into farce territory with the sequence with everyone hiding in the apartment building infuriatingly overlong.

It also lacks Yuen Biao and Sammo Hung who were major reasons for the original movie’s greatness.

It’s not like this is a bad movie as there’s still plenty to enjoy but it just pales in comparison to the classic first Project A. I enjoyed David Lam as the corrupt cop who thought he was untouchable and he has several good scenes with Chan.

There is also no shortage of fight scenes and the climactic 20 minutes have some impressive stunt work with Chan once again proving he is the greatest action star of all time.

Project A: Part II has a wealth of special features with some fantastic behind the scenes footage and the end credits sequences showcasing Chan and the crew doing all their stunts is one of the most entertaining moments of the entire film.

This Blu-ray also doesn’t have chapter selection which still baffles me so you have to go into the movie and skip chapters to find out where you were if you stopped it for any reason.

Overall, Project A: Part II isn’t a patch on the original classic but there are enough action sequences to still make it a worthy addition to the collection.

Eureka have mostly done an outstanding job bringing both these movies to HD with a bevy of special features that will take hours to go through so they are well worth picking up. It’s a shame about the lack of chapter selection but it’s not a deal breaker.