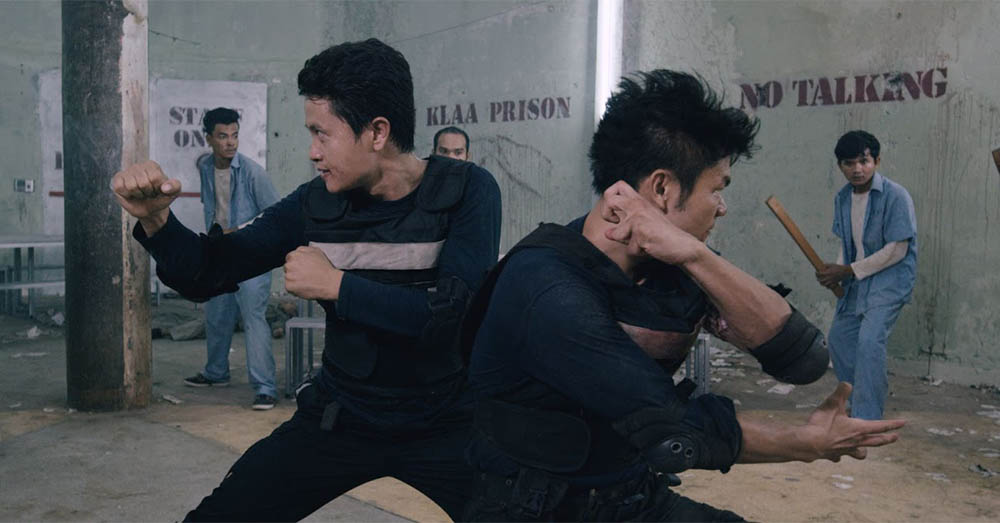 Jailbreak is an entertaining fight flick which moves at a breakneck pace and has plenty of fun characters. Jean-Paul Ly is definitely one to watch and surely has a great career ahead.

Plot: What started as a simple escort mission will soon turn to chaos as the prisoners of Koh Kla take over the prison grounds. A special task force 9Jean-Paul Ly, Dara Our, Tharoth Sam) gets trapped in the prison will have to fight their way out for survival, to protect a key witness (Savin Phillip).

Review: Jailbreak suddenly appeared on Netflix this week so I had to check it out as it never got a DVD/Blu-ray release here (that I can find).

Jimmy Henderson directs this Cambodian martial arts flick with a crazy energy making it an electrifying watch with some brutal beatdowns and zany sense of humour throughout.

The second half was arguably superior as I thought the fights were staged better; there are several moments in the first half where some of the punches/kicks were clearly not hitting the opponents which took me out of a few scenes. The fights are never repetitive however, and it’s never overly flashy; they are fighting to survive not win awards and I really enjoyed that aspect.

You won’t really feel anything for any characters who are given little in the way of backstory but we don’t really need it and for a straightforward fight flick Jailbreak delivers.

I really liked Jean-Paul Ly who not only has the moves but makes his character Jean-Paul immediately appealing. There are some crazy and memorable characters and the Cannibal was one of the best in terms of opponents for just sheer brute force. Sisowath Siriwudd was also an intimidating foe as Bolo who is essentially the main villain and had real presence.

I’m not sure if it was the director or a cast member who is clearly a Star Wars fan but I loved seeing FN-2187 written on the wall as graffiti in the background at one point near the end.

Overall, Cambodia’s answer to The Raid is an entertaining watch and is essentially a 90 minute fight scene so no complaints there; give it a watch on Netflix and enjoy the ride.