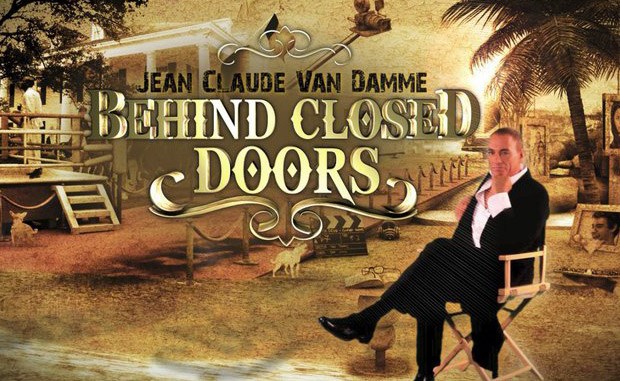 Moving, compelling but also extremely entertaining Behind Closed Doors is better than it had any right to be.

Plot: A chance to see another side to the man known as The Muscles from Brussels, Jean Claude Van Damme.

Review: I am not normally a fan of any kind of reality TV, in fact I normally despise it, but I am a fan of JCVD so I thought I would give this a shot.

If you’re a fan of Jean-Claude Van Damme, then Behind Closed Doors is essential as it really gives you a look at the man behind the legend. Every episode is fascinating as the “Muscles from Brussels” is actually an incredibly sensitive and shy man.

He adores his family and hates being away from them. He admits in one episode that he is extremely bi-polar, which explains his overly emotional state in several episodes.

We discover that he was offered a 3 picture deal for $12 million per film after the success of Timecop but he was “messed up” at the time and asked for $20 million. “I want as much as Jim Carrey!” he said. He ended up getting blacklisted in Hollywood and would make straight to DVD movies for several years. Some of them would actually be his best movies.

We get a real insight behind the scenes of his movies, especially Weapon (Assassination Games as it would later be called) and Dragon Eyes, starring Cung Le. Occasionally JCVD doesn’t know his own strength and accidentally injures a few stuntmen/extras.  Johnny, an extra in the opening scene of Dragon Eyes got hit for real and his nose was damaged; we see JCVD standing alone, filled with remorse for injuring the guy and it’s actually rather moving. This happens again when he hits another guy in the stomach by mistake.

Behind all the glamour, Jean-Claude Van Damme is a normal man who wants to protect his family, especially his kids from making the same mistakes he did in Hollywood. He talks about the drugs and the women and how he fell into the trap, which he is still paying the price for today.

Kris and Bianca come across as nice, grounded kids; Bianca seems rather shy but comes across as someone with her head screwed on right. Kris wants to be in movies but not always be in the shadow of his father.

His wife Gladys is the rock that holds the family together, while Jean-Claude travels the world making movies. He has grown weary of all the travel and would be quite happy to spend his days with his family, especially his dogs.

Van Damme rescues stray dogs from around the world and we find a lovely puppy called Lucky in the first episode that was found in a factory in Romania. JCVD took the dog to his sanctuary where Van Damme and his family take care of injured or abandoned animals and give them a good loving home.

There are some truly heartbreaking moments, particularly with Jean-Claude training for a fight, but age is catching up with him and he finds it harder for his body to do the infamous kicks.

He comes across as someone you wouldn’t want to annoy as he has quite the temper and you really see it when he finds out about a new Bloodsport movie being made without his involvement. That’s a disgrace I might add!

Other highlights include a surprise meeting with JCVD and Bolo Yeung, which is always welcome, but also some behind the scenes clips of Scott Adkins.

The Eagle Path is a project that is close to his heart and during the first episode of the show he talks about how he always wanted to save the world, but thinks he has failed. This movie is meant to be about his environmental concerns, but it still hasn’t been released as he keeps tinkering with it.

I personally think he’s being overly harsh on himself, as I can safely say that for me and many other JCVD fans, you saved our worlds with your movies and have kept your fan base for over 20 years. Pretty impressive, if you ask me.

Overall, If you’re a Jean-Claude Van Damme fan then I would recommend watching Behind Closed Doors because by the time you’re done, you’ll feel like he’s your friend and you want to tell him that everything will OK. Moving, compelling but also extremely entertaining Behind Closed Doors is better than it had any right to be.