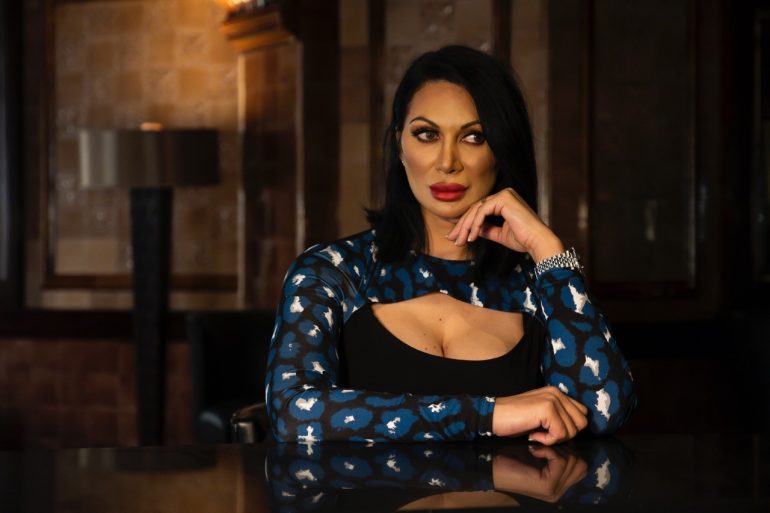 Jeanine Nerissa Sothcott stars in the new gangster thriller Nemesis where she plays Sadie, the wife of John Morgan (Billy Murray) who are victims of a home invasion… but all may not be as it first seems. Jeanine stopped by to chat about the movie.

How would you describe your character Sadie in Nemesis and what appealed to you about her?

Adam Stephen Kelly wrote the role with me in mind so not only did he write to what he sees as my strengths as an actress but I’m sure there’s more than a little of me in Sadie. I’m devoted to my husband and family, I’m a very loyal person and I am not afraid to speak my mind! It really was a gift of a part and I’ll always be grateful to Adam for writing Sadie for me.

As a woman of 49 it really is hard to find a good meaty role in this genre – female parts are few and far between at best but when they’re there they are pretty much exclusively the domain of actresses half my age. We all agreed from the beginning that with Billy being 79 he needed a more mature wife, not a girl in her twenties, or it would cheapen things. What did you like about the script for Nemesis?

What I really liked about it is that it is different to the usual British crime film – it isn’t just thugs in tracksuits in pub car parks fighting over drugs – it has lots of twists and turns and halfway through it obviously switches into a full on home invasion movie (my favourite part). It’s a film that has layers – and I loved the utterly bleak tone – it is morally ambiguous, really when you think about it there are no good guys here, there’s no hero. You like the characters based on their charisma, not their morals.

The other day Nick Moran said something really interesting – one of my favourite scenes is where he goes to talk to Billy The Barman played by Ricky Grover – Nick said maybe that scene is all in his character’s head, or maybe Ricky is a ghost. I love that idea, it makes total sense to me and again it adds another layer.

One of the things we discussed early on was my topless scene, which has caused a bit of a furore on the internet at a time when I thought we were supposed to be celebrating strong women. I very much wanted to do it, in fact it was my idea – I watch all of these action and crime films and they always have a random scene in a strip club or of people having sex and nobody bats an eyelid. When I’m at home I walk around naked or wearing underwear all the time, I thought every woman does, so to me it seemed a very natural scene to do. I’m comfortable with my body, I think I’m in reasonable shape for my age. But a lot of critics seem to have been absolutely scandalised about it, which I have found very odd. I was in a film a few years ago that had a scene with 3 actresses completely nude and one of them doing a pretty violent sex scene and nobody batted an eyelid. I mean put it this way I can see why filmmakers end up having strip club scenes now! I’m proud of that scene though.

Following on from that, normally what do you look for when you get a script in terms of character?

I’m always hopeful there’ll be some action. I love the fighting and the stunts – I was supposed to have a really big cat fight in Nemesis but it ended up being a little disappointing – and I was really looking forward to that. The guys always get the best parts in these films – you read them and think “I’d love to blow someone up in a car”. But you know the most important thing for me is doing something different each time – Sadie was very glamorous and tough, the character I just played in Renegades was a sardonic cop, no nonsense, minimal make up. At the end of the day I’m an actress and I just want to act. What is your process for preparing for a role and specifically for someone like Sadie?

From a physical point of view going to the gym and eating well, obviously. I found a lot of inspiration in Helen Mirren’s character in The Long Good Friday which is one of my favourite films. She did that part brilliantly. Over the last few years I’ve met a few real life gangster’s molls too and I certainly channelled some of their characteristics. It isn’t a world that appears to me at all but the insight proved invaluable.

One thing that really helped is that we had a cast read through quite early on and that really helped Billy, Danny Bear, Ambra and I gel as an on-screen family. I’m a big fan of table reads – not just running the lines, but getting to know the people you’re supposed to be closed to. That was a terrific fun day.

How did you find working with director James Crow and how would you describe his directorial style?

Because of various delays caused by the pandemic I got to know James very well in the run up to filming – we had lots of fun meals and he came to our house quite a bit. he’s a very quiet, self-effacing guy, very into his horror movies, very gentle. As a director he very much let us get on with it as actors which was nice as most of us knew exactly what we were doing. I think the home invasion angle resonated best with him, he enjoyed all the stuff with the masks and the blood!

Some of the key themes in Nemesis were family and loyalty; can you talk a little about that?

They were really the two defining themes of the film – and certainly the only morals. I’m a big believer in both and I think we were making a film in the Trump era when everything was very grey, the world’s moral compass was off… and the film reflects that. I think The Telegraph called it “morally bankrupt stuff – exactly what the genre demands” and I think that summed it up absolutely perfectly for me. We’re making genre movies here, almost exploitation films, and I don’t think you can judge this stuff the way you judge Ken Loach movies or Palme D’or contenders – we’re making fun popcorn films, not trying to change the world.

The Morgans are survivors to the core; have we seen the last of them?

Well who knows… Adam and Jonathan came up with an idea for the first scene of a follow up where as we back into the corner at the very end the lift goes ‘ping’ again and Bruce Payne’s character appears, shoots the masked intruders in the head and says “now you’re really in trouble”… so there’s certainly an idea! Any plans to write or direct yourself in the future?

Writing no, that isn’t for me but I would absolutely love to direct and very much in the action/crime drama – there aren’t many women in this space, maybe because they don’t like it but I grew up on all the classic 70s/80s/90s action movies and I’d love to do that. Not now, but maybe in 5 years you’ll definitely find me behind the camera.

I’ve just wrapped on the second Shogun Films movie Renegades, which was an absolute blast. I play a tough London cop investigating a spate of vigilante killings, which was a lovely change of pace after Sadie! It has a phenomenal cast including Lee Majors, Ian Ogilvy, Danny Trejo and Stephanie Beacham who I had some amazing scenes with. It was great to work with Billy and Nick again, in completely different roles. And I’ve become such good friends with Patsy Kensit – she’s an amazing actress and just a beautiful person. That’s one of the things I love about these Shogun films – we’re like a family.

My next film is called Eyewitness – I play a woman deep in witness protection after testifying against my ex husband, a psychotic mafia boss… who gets early release and tracks me and our son down. It’s action packed, shooting in the UK and LA and will have another amazing cast.

Is there a dream project you would love to get off the ground?

Yes I would love to do a female revenge movie, something like Death Wish – but an action-centric one, not something torture-porny like I Spit On Your Grave. Something really gritty and urban, with brutal kills and a real story. That would be my ideal role.

What would you like audiences to take from Nemesis?

I think it’s important to watch it knowing we were right in the eye of the storm of the pandemic when we filmed it – so yes, there were compromises on things like action and locations but it was a micro budget film trying to do something different. I think the cast of beloved British actors really gave it their all and it deserves credit for that. It is definitely a marmite film, people seem to love it or hate it with no middle ground!

Thanks so much for taking the time to chat. All the best with the film and future productions.

Nemesis is out in North America now