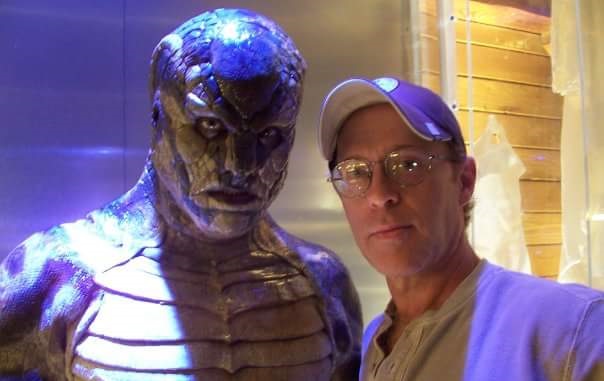 Jeffrey S. Farley has worked on special effects for over 200 over several decades including Demolition Man and Universal Soldier: Day of Reckoning which we talk about today. We also discuss Return of the Killer Shrews which recently hit home video.

You’ve had a spectacular career working on many great films over the years; were there any movies that particularly inspired you to get into special effects growing up?

Of course King Kong and The 7th Voyage of Sinbad were early influences, but it was the viewing of a film titled Equinox that really spurred my interest as it was shot primarily around the area I grew up in. It turned out I had a connection with the editor of Famous Monsters of Filmland magazine, Forrest J Ackerman and after meeting him, he helped to introduce me to a number of special effects experts such as Ray Harryhausen and Jim Danforth. David Allen and Dennis Muren were two others I met at that time. It also turned out that Richard Chew, who was one of the editors of Star Wars lived a few houses away. I grew up with the industry around me.

The original Killer Shrews is the perfect “Midnight Movie”; were you a fan of it before working on Return of the Killer Shrews?

I recall seeing the film on television when I was a kid and this was years before the Mystery Science Theater 3000 version. The original film was described to me by my dad before I had seen it, so I was a bit prepared. But Killer Shrews, along with it’s fellow film, The Giant Gila Monster have been ingrained in the public psyche for now, over half-a-century and it deserves the cult status it has gained. How did you get involved with the new movie?

Steve (Latshaw) and I go back to his earlier film, Dark Universe, when Fred Olen Ray hired me to come up with an additional creature effect for the film. Shortly after, Fred again brought me aboard Steve’s film, Jack-O to design and create the film’s title character. Our careers crossed paths again a few years later when Steve wrote the script for the Stan Lee film for the (then) Sci Fi Channel, Lightspeed, where I designed and supervised the creation of the character, Python. I guess my name must have popped up in conversation at some point. In reality, it’s a dream come true for a kid who grew up on these films and be able to become involved in some way. I am very lucky and thankful to Steve for thinking of me.

Did you use the original creatures as a template for creating the molds for the new movie or did you essentially have free reign?

Of course the original creatures were my jumping point, but I decided to take them away from ‘coon dogs’ and make them more like a mastiff. I never strove for realism as that would have been counter to the films tongue-in-cheek nature. How has CGI affected your job?

As a tool, it is a powerful addition to the arsenal in a film makers box-of-tricks, but it should be used sparingly to make the illusion work. In a lot of ways, it has made my job easier because I have been able to utilize it for specific items that would not be possible physically. Return of the Killer Shrews is a great example where the post-production effects add a modern twist to the original films charm.

Do you see it as a positive influence on modern cinema?

That is a tough question to answer…  As film progresses in its ability to tell a story visually, it also loses quite a bit of its ability to connect with audiences in a meaningful way. Do you prefer to use practical effects when possible?

That’s what I get paid for. I’d be cutting-my-own-throat if I didn’t (lol), though there have been times I’ve suggested that a visual effect would be the better option.

I’m sure every movie has its challenges however, what has been the toughest project to undertake so far?

I believe when I did the effects for Puppet Master vs Demonic Toys which had a very short schedule to meet the air date set by the Sci Fi Channel.

Following on from that do you have a genre you particularly enjoy working on?

I enjoy working on any film in any genre that has a good script first. Ironically, while I’m working on horror films, I tend to watch Spaghetti Westerns.

Demolition Man turns 25 this year and you worked on some special effects for it; what was your involvement?

I had been working for Alec Gillis and Tom Woodruff Jr. at ADI since Death Becomes Her and they got the job making the bodies in the ‘hockey pucks’ in the Cryo-Chamber, plus the body doubles for Sylvester Stallone and Wesley Snipes. I was among the first few crew brought in to mold the prototype body and help figure out how to cast them up. There was a huge crew of great and talented people there and everything was top-notch work. Later, I was asked to take over on the set while the Cryo-Chamber scenes were shot, which took place on Stage 16 at Warner Bros. Studios. It was a great experience and I’m always grateful to Tom and Alec for giving me the chance. You were the makeup effects shop supervisor on the Jean-Claude Van Damme film Universal Soldier: Day of Reckoning which I think is a bit of a surreal masterpiece.  How was that to work on?

That took place during a 12 week period in which I didn’t take a day off. While Universal Soldier was in preproduction, Return of the Killer Shrews also came up. I think I had about 8 projects in at that time, so with my lack-of-sleep, it became a very surreal experience, so it must have translated somehow. At the end, I took a break from the industry and ended up meeting my fiancée.

How did you find working with director John Hyams?

Since the film was shot in Baton Rouge and I was in Los Angeles, unfortunately, I was never able to meet him.

Having worked on blockbusters and indie pictures do you have a preference?

I prefer any film that presents a new challenge… but a decent schedule and budget always help.

What are you currently working on?

I’m currently creating an oversized cockroach puppet for a feature titled, The Uncanny as well as designing a couple of masks for Kenneth J. Hall of Total Fabrication. I am also in the early stages of transforming actor, Bill Oberst Jr. into Ray Bradbury for his one-man stage show based upon the legendary writer’s works and life. I am also spending much time on a new career, painting the filmic creatures that have haunted my memories since I first read the pages of Famous Monsters when I was a kid.

Thanks so much for taking the time to chat and all the best with the upcoming projects.

You are welcome and thank you very much for giving me this opportunity.

RETURN OF THE KILLER SHREWS is now available on VOD