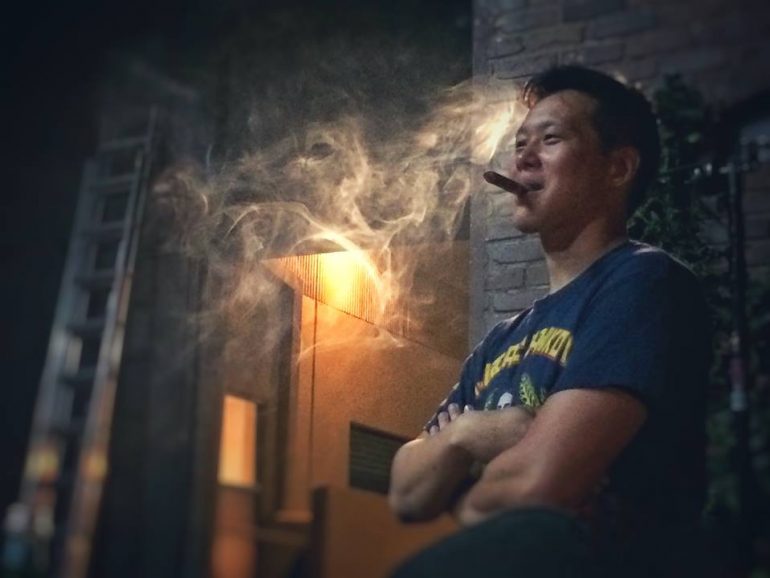 Today I’m joined by stunt coordinator, fight choreographer, stuntman and writer Jimmy Lui who has been working with Keanu Reeves on his upcoming film Man of Tai Chi. Thanks for joining us.

EOIN: So Man of Tai Chi, how did you get involved with the project?

JIMMY: I was friends with Tiger Hu Chen and was working as an Executive Producer on his debut film as a leading man, Kung Fu Man.  Tiger and Keanu had been working with the writer on Man of Tai Chi for five years and they had burned through over twelve drafts of the script.  At this point, Keanu was only attached as the villain, not as the director.  He wasn’t happy with the script, which was very plot driven like a B-movie.  Tiger and his manager brought me in to help rework the script.  Working with Keanu and Tiger and their writer for three months, I helped them to elevate the story by focusing on the characters, themes and the martial arts philosophy.

EOIN: This is Keanu Reeves directorial debut, isn’t it?

JIMMY: Yes.  Keanu was excited and happy about the draft I co-wrote with them and soon after decided to make Man of Tai Chi his directorial debut.

JIMMY: I don’t know.  I was never on set.  My involvement with the project ended after the scripting stage.

EOIN: Do you have any plans to work with him again in the future?

JIMMY: Not at the moment, but we’ll see what the future brings.

EOIN: I’ve often wondered, in terms of fight scenes how detailed is the script; does it just say “they fight” or is practically every move described?

JIMMY: On Man of Tai Chi, we worked hard to find the story of each fight.  I haven’t seen a cut of the movie yet, but at least in the scripting stage, we made sure that each fight told a story and gave insight in to where Tiger’s character was in his journey to the dark side of Tai Chi.  We didn’t describe each move; rather we focused on the feel and story of the fights.

On other scripts, the details of a fight scene run the whole gamut from every single move being described to just “they fight.”  It depends on the writer.  Often times I see scripts where the fights are unfilmable as written because the writer has no knowledge of or experience with fighting.  I feel the best thing for writers to do is not to focus on the minutiae of a fight, but instead make sure that the story of the fight is clear.  That will best help stunt coordinators and fight choreographers to put what the writer intended up on the screen.

EOIN: Some of the Choreography is being handled by the legendary Yuen Woo-Ping. Was this the first time you’ve worked with him?

JIMMY: I’ve never worked with Yuen Woo-Ping.  There was never any doubt that Keanu was going to use Yuen Woo-Ping because of their working relationship from The Matrix movies.

EOIN: What’s the toughest fight scene you’ve had to work on so far?

JIMMY: I choreographed a fight for the movie Blood of Redemption that featured three agile knife fighters against Dolph Lundgren and Vinnie Jones.  The idea for the fight was to have the three knife fighters attack strategically and in sync with each other against Dolph and Vinnie; but to also have Dolph and Vinnie work as a team against the knife fighters.  It was a tough fight to choreograph because of all the moving parts and to make the fighting look natural and the strategy understandable.  I hope the final product is clear and representative of all the hard work that Dolph, Vinnie and the stunt guys put into it.

EOIN: How do you get a job as a fight choreographer and what kind of training is required?

For me, I was lucky in that I kind of fell into it.  I was friends with Sammo Hung and he knew that I had gone to USC film school and that I trained with Benny “The Jet” Urquidez.  When Sammo was hired as the action director for the Jackie Chan movie The Medallion, I was asked to train the lead actress Claire Forlani for her fight scenes.  Then I was asked to choreograph some gun disarms for Jackie’s character for the boat scenes at the beginning of the film.

EOIN: What is it that appealed to you about it?

JIMMY: It all boils down to storytelling.  I went to film school to become a film director; that’s still my end goal.  And a director is nothing more than a story teller.  Being a fight choreographer and stunt coordinator allows me to be a storyteller for the fun parts of a story: the action.  Plus it allows me the opportunity to be on set and work with different directors and actors and learn from them.

EOIN: You’ve learned many styles of martial arts including Kung Fu, Sword, Staff, Baton, Knife, Boxing, Kickboxing, Muay Thai, Aikido, Judo, Grappling and MMA to name but a few. What age were you when you first started?

JIMMY: I started learning Kuk Sool Won, a Korean martial art, when I was 7.  But at that age, I wasn’t serious about the martial arts.  Then when I was twelve, I became obsessed with Bruce Lee movies.  From that point on, I became a serious student of the martial arts.  I earned a Black Belt in Silkisondan Karate while cross training in other martial arts.  Hapkido, aikido, wing chun kung fu, Ba Gua kung fu, Chen style Tai Chi, boxing, kickboxing, Ukidokan, Judo and a few more.  But for the past fifteen years, I’ve been training and teaching under world champion kickboxer Benny “The Jet” Urquidez.  I’m pretty blessed by it all.

EOIN: You’re also working with Dolph Lundgren and Cung Le on A Certain Justice which is coming soon. What can you tell us about that?

JIMMY: I was brought on to coordinate and choreograph the final fight between Cung Le and Dolph Lundgren.  Both of the actors are experienced and skilled martial artists so it was a lot of fun to work with them.  We didn’t have much time to shoot it, but it should be a fun and exciting fight.  Here’s a Vine video that actress Briana Evigan took of the fight rehearsal with me showing Cung Le the choreography:

I’ve also been working on Blood of Redemption with Dolph Lundgren and Billy Zane where I was the stunt coordinator and fight choreographer.

EOIN: What other projects are you currently working on?

JIMMY: As a stunt coordinator and fight choreographer, I’ve got a trio of Dolph Lundgren movies set to come out this year.  Ambushed has a cool fight between Dolph Lundgren and Randy Couture, so look out for that one.  And then there’s Blood of Redemption and A Certain Justice which we’ve already discussed.

I have two projects that I’m trying to set up as a director.  One is an adaptation of Faust as a revenge thriller and the other is an all fighting action movie similar to The Raid.

I’m also working on this documentary about one of the best fighters that no one’s ever heard of, this German martial artist Udo Schultze who fought in the late ’80’s/ early ’90’s pre-MMA.

EOIN: Thanks very much for sharing your thoughts with The Action Elite. Good luck with Man of Tai Chi and with your career.