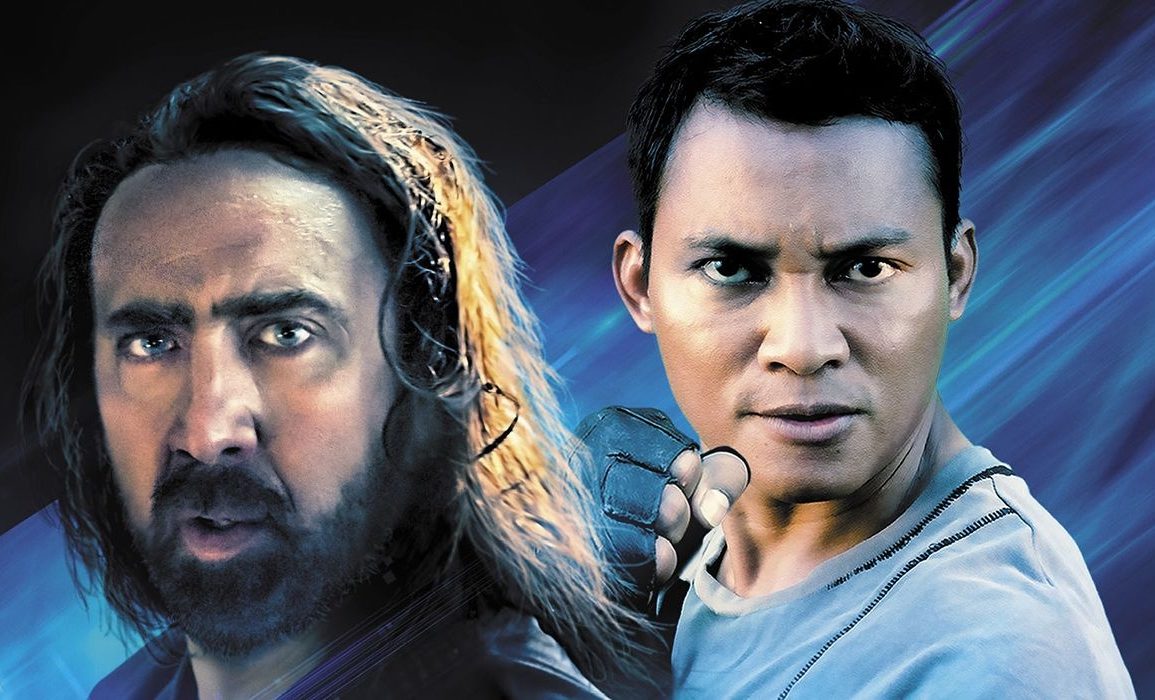 Jiu Jitsu may not have especially memorable characters or dialogue but it does have near constant action with innovative fights and a cast that give their all. It’s the perfect escape from 2020 making it a must-see for fight fans.

Plot: Every six years, an ancient order of jiu-jitsu fighters joins forces to battle a vicious race of alien invaders. But when a celebrated war hero goes down in defeat, the fate of the planet and mankind hangs in the balance.

Review: Jiu Jitsu may well have the best action movie cast of the year which includes Nicolas Cage, Alain Moussi, Frank Grillo, Juju Chan, Tony Jaa, Marrese Crump and Rick Yune. That alone made me curious about the film and the gonzo trailer promised one of the craziest action pictures of 2020.

As others have likely stated it’s essentially Mortal Kombat meets Predator with nearly non-stop action. There are some innovative fight sequences too and the highlight for me was Tony Jaa’s introduction where we get various POV shots from Jake (Alain Moussi) as they escape some American soldiers.

Aside from Jake I couldn’t tell you a single other character name or quote any dialogue but it’s not important; this is a movie made for fight fans who will eat this up as it has some of the most entertaining beatdowns you’ll see this year.

Everyone gets their moment to shine and it’s great to see Marrese Crump in higher profile roles with this and Welcome to Sudden Death; he deserves to be a huge star as his talent is undeniable. Juju Chan also gets plenty of action and for once isn’t underused.

Tony Jaa was one of the main selling points for this movie and I’m glad to see he gets a decent-sized role with plenty of action.

In terms of performances Frank Grillo commands the screen as always and check out how jacked his arms are in this; he is huge and always convinces during action scenes which is why he remains one of my favourite actors working today.

Nic Cage is the same as always, but his mere presence never fails to entertain; it’s too bad there were so many body double moments during his action scenes.

Alain Moussi proved with his Kickboxer movies that he has the moves to be a new action hero and Jiu Jitsu cements that although it’s got me looking forward to Kickboxer: Armageddon which is due out in 2021 apparently.

Anyway, Jake spends most of the movie trying to remember who he is after being chased by our evil alien antagonist Brax and then falling off a cliff and banging his head. I have never liked stories about people with amnesia; it’s been done to death and I find it is such a tedious way to tell a story as our protagonist slowly pieces things together.

Brax may be very similar to The Predator in the way that he can go invisible but also has a sense of honour before he battles his opponents; this makes him a more interesting antagonist as he isn’t just a vicious monster.

It’s quite an odd tale and I think any movie which has weird moments should always be lauded as it manages to come up with a few intriguing ideas and visuals.

Overall, Jiu Jitsu is everything you’d expect it to be with near constant action, impressive fights and a winning cast. It isn’t all that memorable but for pure action thrills it delivers the goods.