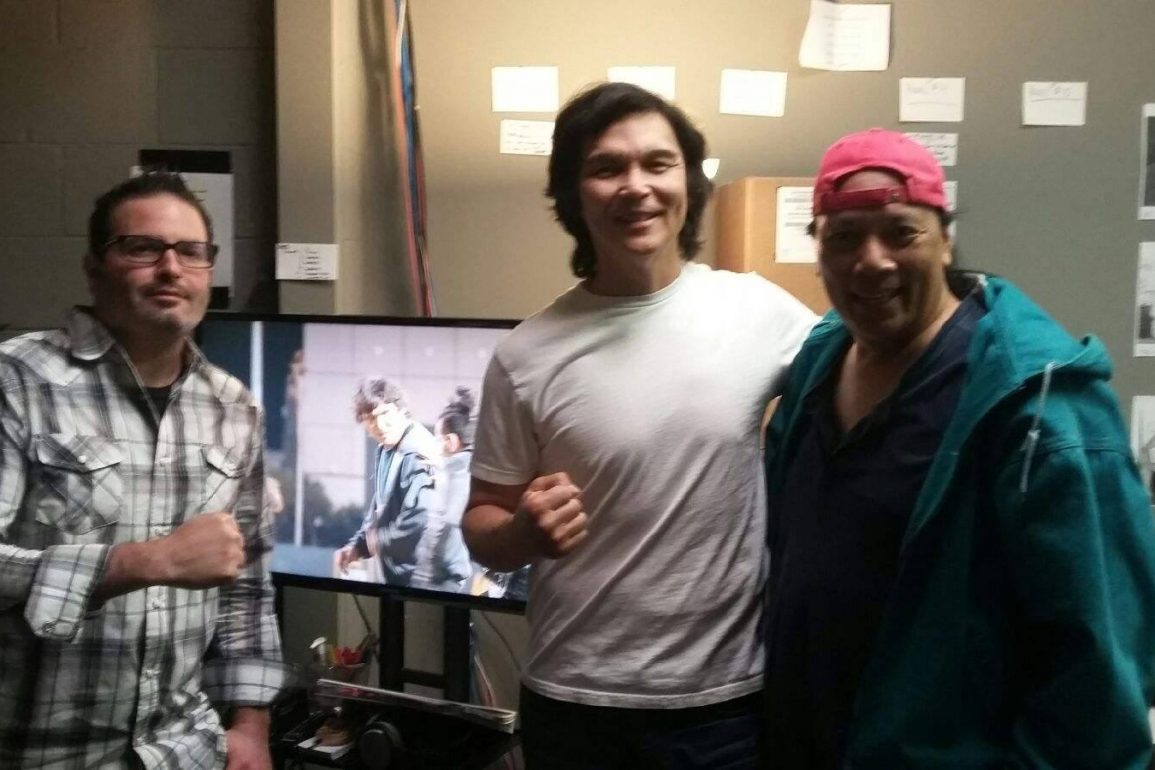 John Kreng is an actor, fight coordinator, writer, director and also the author of Fight Choreography: The Art of Non-Verbal Dialogue which has become a bible for those in the industry looking for insight in how to craft better fight scenes.

John recently coordinated the fights in Paying Mr. McGetty starring Don “The Dragon” Wilson and R. Marcus Taylor; he chats with The Action Elite about working on the movie.

You did the fight coordinating for the new action comedy Paying Mr. McGetty; what appealed about the project?

Several things really appealed to me about this; one of which was getting to work with Don “The Dragon” Wilson. He was somebody I watched fight as a kid growing up and I would read interviews and articles on him in magazines. So when he started doing movies I thought that was really cool. So I worked my way up over the years and when his brother James Wilson asked me to coordinate on Paying Mr. Getty my reaction was “wow, really?” It was such an honour to be asked and get to work with Don. He was amazing to work with because he has a certain understanding and a logic; he let me create what I needed to create and he would take it and make it his which is great because it’s such a collaborative process. I felt honoured that he gave me that power to put stuff together. He would watch what I had choreographed with the stunt crew where he would say, “Ok I see why you’re doing this and this but I just need to change it to work for me” so it was a great process.

The other was getting to work with my friend Marcus Taylor; he’d been my friend when he was just a stuntman and to see him rise so quickly was an inspiration and also I’m very proud of him.

He’s one of those guys that wears his emotions on his sleeves so what you see on screen is pretty much what it’s like in real life when you’re hanging out with him.

You mention in your book Fight Choreography: The Art of Non-Verbal Dialogue about Style of Fighting; how did you know what kind of fighting styles to use for Paying Mr. McGetty?

I talked to Marcus and Don about how they wanted to come across; the thing was about Paying Mr. McGetty is that there was a vague script that we kind of went with. So I would sit and talk with Don and ask what style of fight he wanted to have with a certain character and take it from there. Don wanted something along the lines of Bourne Identity where it was simple yet forceful. So I started looking more into it and I incorporated a little more Japanese jiu-jitsu, aikido locks and stuff you would do just to change it up a bit. I just wanted to add something that I hadn’t seen Don do yet. He was totally up for it and thought it was really cool.

Don mentioned making these fight scenes more realistic; how do you go about doing that?

Well we didn’t have the budget for wires! (laughs) The term “real” is a slippery slope to be honest with you. What Don says is real as opposed to a director that has never fought in his life is something different. For Don it was easy because I knew he knew what was real as we both come from a competitive and traditional marital arts background. So there’s that foundation that we have that I felt was really important and that helped. If somebody said to me “I want real” and they don’t have a martial arts background or the last fight they had was in the Third Grade, their concept of real would be far different than it would be for me or Don. I deal with that often when I work on projects so when they ask for real I ask them what their definition of “real” is.

Let’s look at it this way; were the martial arts fights in The Matrix real? In reality sense? No, but for the story and how the background was set then yes, it was. It was real to the story.

So Don and I had to figure out this character and how he wanted it to be portrayed so I had to understand where his character was at and how he is proceeding the story. So that’s how we kind of keep it together.

Do you find it easier to coordinate a fight scene if the actor/actress is trained in fighting?

If they have training then yes, that opens things up and the foundation is wider so we can do a lot more. That really helps especially if we don’t have any pre-production time to help piece this together which I didn’t get to have with this. When we were in Florida, I had to piece it together on the spot. Thank God Marcus had previous training and the stunt crew that I ended up hiring from Florida already had experience. All I had to do was kind of feel them out and see who could do what and start putting them in different fight scenes.

You also talk about the three-act structure to action scenes in your book; how did you go about putting that into effect for this movie?

It was pretty simple for this movie as Marcus has a very expressive face and full of character. It’s very easy for him to express the right emotions in the scenes and make it work.  As far as the three-act structure, there is a liquor scene fight and in this scene there is a righteousness to this character and he is also getting into himself with his skill-set during that illusion/dream sequence when he realises he’s got the skills. So we’ve got the conflict and the growth which is how that scene unfolds. The hardest part of these scenes is we’re not given much time so I’ve gotta do a certain short hand in telling these stories. You pull stuff out of nowhere that you maybe wouldn’t have thought of if you’d had more time.

What would you really like audiences to take away from Paying Mr. McGetty?

It’s a fun movie and something that’s different. We shot all those action scenes in a week and I had the most amazing stunt crew in Florida. These guys were all amazing and I thank each and every one of them for stepping up and making the action scenes work. I think it’s a quirky action romance that’s about a guy trying to find his groove and get his rent paid (laughs). It’s a bunch of little things that you can’t quite put your finger on.

It’s like that movie After Hours which was about a guy who has a cubicle 9-5 job and he always wondered what it would be like to have some adventure in his life. Then he experiences the craziest things within 24 hours and he ends up coming back to his day job the next day a changed person. So I kind of see it like that in a way.

I particularly enjoyed working with Wade Williams on this picture because he brought so much character to the coffee scene and he brought 1000% to the character and it really comes across. I love working with these kinds of creative people who put in everything and turn nothing into something… like magicians. It’s so much fun to watch it unfold before your eyes and seeing how it works on the big screen.

As far as what people should take away from it I would say not to categorize it and just enjoy it!

It’s like those Hong Kong films from back in the 80s that had action, comedy and maybe even a musical number which they’d toss in because at the time the audience was a little different.  They had to attract all the different audiences to come into the theatre and see it. So I don’t know if it was a conscious decision; I guess you would have to ask Michael Baumgarten but this definitely feels like those 80’s films with a little of everything.

Since The Matrix things have melded a little bit more between Asia and the West. If you look at the wirework; wires were something that had been forgotten and since The Matrix it suddenly became the cool thing again and everybody wanted to use wires. I enjoy both to be honest with you; I regularly talk to my friends in Asia, and I still like the way things are done here in the West. There’s a certain procedure that we go through here that is kind of lost now over there from what I’m hearing since Hong Kong has since dissolved into China. There are different things happening over there that still need to be worked out. Hong Kong guys do some crazy, outrageous stuff that we don’t even think about here. It’s like there are two different philosophies but then you think “is one right/wrong?” it’s actually a mixed bag with both. I try to take the best out of both and put into the team I work with and the philosophy that we use. That’s what I like about having worked both sides of the Pacific.

What do you think an example of a good recent fight scene with the three-act structure?

I thought the bar fight in the first Jack Reacher was brilliantly put together. The fight started in the bar. The girl comes up and talks to him. Every word that comes out of his mouth and every reaction is him sizing this person up. Then he starts pushing buttons so when the girl starts to get pissed off the guys come in and he starts engaging with them. He then starts sizing them up and then when he meets them in the street he pretty much already knows their emotional mentality and the content of what they’re going to be doing to him. He knows their intent and what he has to do to diffuse the situation. He didn’t kill them. He immobilized them. So there’s all this stuff going on that I really appreciated in Jack Reacher. I’ve watched it several times as it’s so much fun to watch but it’s also very intelligent for the character and for how the scene opened itself up.

Melissa Tracey and I are forming a production company and she has a couple of screenplays that she wrote that we have in the queue and I have a few projects that I wrote a few years ago that were owned by the studios  but have now reverted back to me that we’re thinking of doing. One is an action/adventure and the other is a kid’s baseball movie. So we really want to push these forward this year. I plan on directing this year too…

I think you should make Entrails of Vengeance….

(laughs) You’re psychic! I’ve never seen those movies but they are pretty extreme so yeah I think I’m directing the sequel.