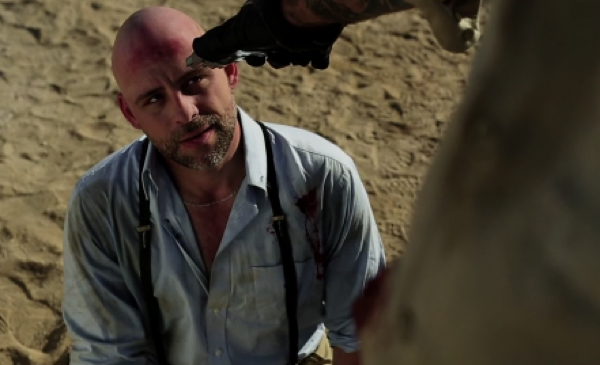 We talk with Actor, Writer, Producer, Director and Head Honcho with the Arrow in the Head website: John “The Arrow” Fallon.

Eoin: So, how did you come up with the Arrow in the Head website?

John: I was fresh out of acting school doing the audition rounds while working as a script doctor for local production companies when my good bud Berge Garabedian aka JoBlo shot me an e-mail out of the blue saying: “Look you know all about that horror stuff. How would you like to start a horror section on JoBlo.com?” Which was at the time a small fansite he was running, nothing like it is today. I thought about it, figured it would help keep my writing fresh for screenwriting and answered back: “If you don’t censor me and we can call it Arrow in the Head, I’m in.” He agreed and AITH began.

To be honest, I was doing it purely for fun. I didn’t think it would go anywhere or that anybody (my mommy aside) read what I wrote, but three months in, I started getting hate mail, fan mail, and feedback from filmmakers (both good and bad). I then knew I was on to something. For better and for worse, a new career path opened up for me, been exploring it ever since.

Eoin: Is there someone in the film industry that you’d love to work with?

Eoin: To follow on from that, is there a dream project you’d love to make?

John: I am writing a horror script right now, one that I will direct. It is very Lynch-ish and Polanski-ish. So yes, that one would be my dream project and yes it will come through. I won’t stop till it does.

Eoin: Can you tell us a bit about your “Dead Shadows” project?

John:  DEAD SHADOWS is the brainchild of director David Cholewa and screenwriter Jules Vincent. I have a lead in it and am very excited about the role. The part is one that embraces my “typecast”: strong, tough, no bull, etc.  You’ll get to see me kick lots of ass! It’s a terrific script; a mix of THE THING, DEMONS 2 and NIGHT OF THE COMET. It will also mark my first time acting in French from France… should be interesting.

Eoin: When writing, do you have a specific process? For example, must have coffee, music on, etc…

John: When I write, either a review or a screenplay, I wait till I feel “on” and when I am… well…  I compare it to a musician playing music; I hit that keyboard and start playing. I usually have 1 to 3 drinks (rum and coke) when I write (to loosen up, more than 3 equals me tipsy i.e. crap writing) and if I’m writing a script, I put on a film score that fits with the vibe of the story I am creating. If it’s a review, I just put on whatever I feel like hearing. The worst thing for me though is having to write when I don’t feel “on”. I gotta force it… I’ve never been good at that, but I manage.

Eoin:  Deaden was a hardcore, low budget actioner from 2006 and I loved it. Are you working on any action projects just now?

John: Although horror inclined, DEAD SHADOWS has a lot of action in it. I get to handle lots of weapons and dispose of tentacled slime left, right and center. Am also presently writing an action script for a US prod company, one that I will also act in. But am keeping it on the down low till we’re further down the road. Finally I have an action script called TRIGGER, one that I’ve tried to get off the ground for 3 years now, sooner or later it will happen, so that’s ammo in my clip.

Eoin: What’s your favourite action movie of all time?

Eoin: Can you tell us what it was like working on 100 Feet with Famke Jansen and Michael Pare??

John: I was nervous working with Famke as she popped my cherry in the “acting a full scene with a star” department. But now it’s out of the way. I pulled through and am happy with my performance. Famke was very professional, she didn’t talk much in between takes…she was very focused, a ying to my sack of nerves yang. As for Mike Pare, we didn’t have any scenes together, but I enjoyed hanging with him on set, in lounges and learned from watching him work (he’s very talented).

Eoin: If I come to Montreal at some point, would you partake in a drinking competition with me?

Thanks a lot for taking the time for an interview bud, much appreciated and all the best with your upcoming projects.