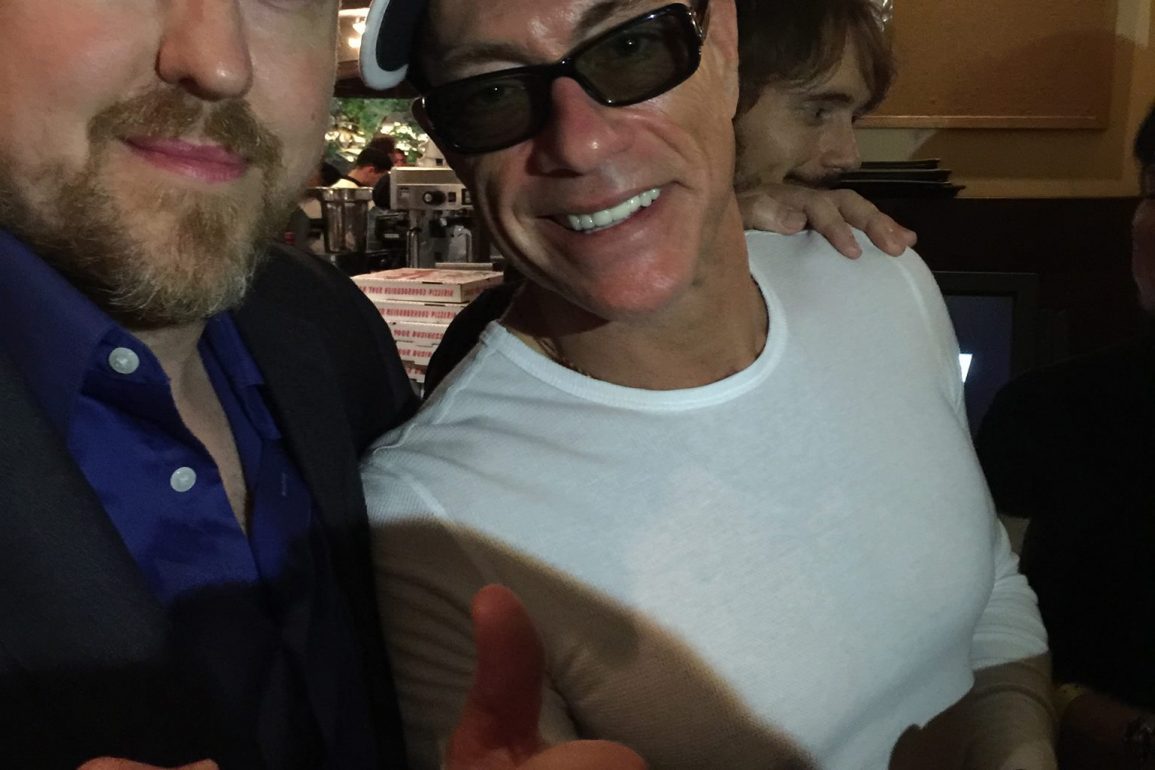 Joshua James is the writer of the new Jean-Claude Van Damme movie Pound of Flesh which tells the tale of a former black-ops agent who begins a blood-soaked quest to find the organ thieves who stole his kidney before he could donate it to his dying niece.

Joshua stopped by to chat with us about the movie and how the completed movie is quite different from the original concept.

When I spoke to Ernie Barbarash about Pound of Flesh recently he mentioned how the original script was almost more of an Expendables type story. Can you tell us about that original concept and how it developed into the finished film?

Hi, thanks for taking the time to chat with me. Originally I had the idea for the film a few years ago,  I had in my mind the idea of a bounty hunter who has to track down his own body part. We see a lot of movies about very skillful gents who have to find someone close to them who’s been kidnapped, but we’ve never seen a movie about a guy like that who had to find his own body part. The idea got me quite excited, in fact. And, of course, my hero needed a clear and urgent reason to find this body part before it was too late. Thus the story of the brothers and the blood bond between them, etc.

It was originally set in Iowa, but as development happened, it got moved to Spain, then to Brazil, then to China, then to Manilla. But the core story remained the same.

Later we changed Deacon to a Kidnap and Rescue expert, which I loved even more. A guy who is trained to find people has to find his own kidney, I just thought that was a cool idea.

How long does it take you to put a script together from original concept to final draft?

Each script is different, it really depends on what is solved before the writing actually starts. If I have the ending solved, I can write one in a few weeks. I need the act breaks cracked, and the ending set, and if they are, it goes well and quickly, I’ve written one in as fast as a week, or I can take months.

The hard part is cracking the story, not writing it. The most recent job I had, I spent 3 and a half months breaking the story with the director (who was also co-writer) but the good news is, once the story was broken down, it made writing the script go smoothly. I wrote that one in three weeks. Pound of Flesh took me a month to write the rough draft originally, but it went through many, many drafts. That’s part of the development process.

When writing the original script for Pound of Flesh, did you have any particular actors in mind?

I didn’t, actually, I just had this bug in my head about a story and I knew I had to write it. Sometimes I get those and I have to write them out, no matter if I think someone will make it or not. The story of the brothers and the kidney and blood bonds just haunted me.

What’s interesting is that it wasn’t really conceived as a martial arts movie, it was more of an drama, an art house drama like THE AMERICAN, although of course there were martial arts in the script, in the fight scenes, the knife fights, etc. Because that’s kinda how I roll. So it really worked out.

Anything cut from the film which was in the script that you would have liked to have seen?

I can think of three things, one, a second car chase that was pretty awesome, but it was pretty big, it took place after the big fight at the warehouse. That had to be cut do to scheduling issues.

Two, Nardo’s part was originally much bigger, and he was there with them until the end. It got changed so that the focus could remain solely on the brothers, which was the right choice, it’s about them, after all, but I really liked Nardo and his arc.

And three, there was a scene in a strip bar where George gets a lap dance that sadly got cut for time. I believe that even got shot, and had a great and funny actress as the dancer, but the powers that be felt, quite rightly, that the brothers needed to move as quickly as possible on their chase.

It happens, even with great scenes.

What did you learn from the process of creating Pound of Flesh?

I learned so many things, but I guess the thing I’d learned the most is that anyone’s dream can be realized, if you work hard enough at it.

And I met and worked with some great, great people, JCVD of course, and Ernie the director, who I’d known for awhile, fight choreographer John Salvitti, a great guy, and, of course, Darren Schalavi, who tragically passed away far too young.

Darren was a wonderful, fun guy, he’d IM me funny messages and tease me online all the time. He knew I have a crush on Gina Carano, and he took a picture of she and him sitting together (on the Kickboxer shoot), with my name written on a napkin and a lipstick kiss from her. He loved to tease me like that. Great, great guy and a terrible loss for us all.

You’re trained in various styles of martial arts; what or who inspired you to take an interest?

My father was a big fan of Chuck Norris, he would take me to his movies when I was  a kid, like Lone Wolf McQuade, and we’d do pretend karate fights in the living room afterwards. It was so much fun. Later he got my brother and myself into karate, which was pretty great. It was hard on him, karate, as that he’d had polio as a child and one leg was shorter and the heel wouldn’t move, it was very difficult and challenging for him, but he loved doing it with us.

Later I got into judo, TKD and boxing in college, and of course became a huge JCVD fan and have been my entire life. To be able to work with him was a dream come true. My father passed away in 2013, but he knew I’d been talking to JCVD around that time, so he was proud that I was speaking to him. Sadly, of course, he missed the movie, but I know it’d make him very happy.

You’ve studied acting at the University of Iowa and worked in the theatre; any plans to act on the big screen?

Oh man – LOL! Well, never say never, but probably not. I haven’t acted in forever, and to be honest, even when I was at Iowa, I was kinda more interested in writing stuff than I was in acting. I got into writing there by writing sketches for No Shame Theatre.

I started a performance group with actor DB Woodside who was also there at the time, one  we called White-Boy Black-Boy, and we did some fun, fun work on stage. It was the truth birth of me as a writer, first time I got into it, and when I did, I went all the way. I loved it.

Acting is fun, though, a lot more work than people realize, it’s a different creative muscle, and that acting training really helped me as a writer, I’ll say that for certain sure. It’d be fun to jump into something for a line or two, but I like doing what I do now. I love writing, I really do.

Is there a script that you wished you’d written (from any genre, not just action) and why?

So, so many. Just about anything from Pixar, they really put together stories in a way that’s inspiring, they don’t follow rules so much as a philosophy, and our world is all the better for it.

I love many types of stories, I loved MAD MAX FURY ROAD and INSIDE OUT.

I loved THE EQUALIZER, by Richard Wenk, great script. And I really loved JOHN WICK, written by a buddy of mine, Derek Kolsted.

I love a lot of scripts, but I don’t know that I really wish that I’d written them myself, however. I use them as inspiration for the stories I want to tell and to learn how to better my craft.

Following on from that is there a particular story or book that you would like to adapt?

Yikes, again, so much to choose from. I have a lot of passion projects. But top of the list, I’d love to do a remake of BILLY JACK, I think that’s just a great idea waiting to be reborn.

There’s a YA book from my youth that I’ve always wanted to do called THE MAD SCIENTISTS CLUB that I think would be a great, great project. And a couple other things that I don’t want to share publicly, heheheh.

But… if they ever decide to reboot ENTER THE DRAGON, I hope I get a shot at that. I’ve seen that movie at least 500 times. I’m the perfect guy for that one.

I just finished up an assignment for a sci-fi action project that is really kickass and unique, I can’t say anything about it other than that it is wholly original and exciting, I’m working with a great director on it and believe it’s gonna be huge.

After that, I have a couple more scripts that we’re going to set up, one is called RUN, which is a balls-to-the-wall hardcore martial arts action film, and a couple other action ideas that I’ve been hungering to write out of my brain and get them up and breathing. That, a pilot or two and a few things that I really want to write if given the chance by the powers-that-be.

Then there’s a dream project I’m working on with a couple of very close buddies, a film that’s super-secret that we’re going to make happen ourselves.

And I have a novel coming out in the fall called BULLETS. There’s nothing like creating, man.

Thanks once again and all the best with your future projects.

Pound of Flesh is available on DVD & Blu-ray now.