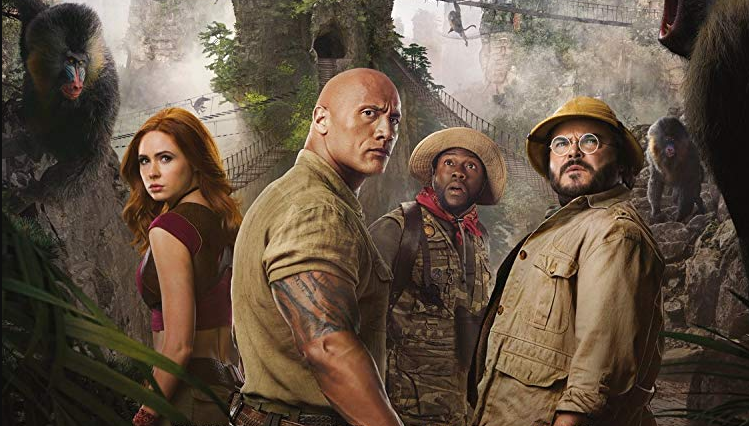 Jumanji: The Next Level is harmless escapism with no shortage of laughs, action and heart making it a worthy addition to the franchise.

Plot: In Jumanji: The Next Level, the gang is back but the game has changed. As they return to rescue one of their own, the players will have to brave parts unknown from arid deserts to snowy mountains, to escape the world’s most dangerous game.

Review: I missed this in the theatre but as it’s now out on digital I figured I would just blind buy it. Jumanji: The Next Level was a box office smash making over $700 million worldwide and it’s easy to see why. Like Welcome to the Jungle it is a fun adventure yarn with a likable cast although I think this entry may be the best yet.

I found Welcome to the Jungle went on for too long and I pretty much stopped paying attention for the last half hour. Despite being 2 hours long I didn’t have that issue with The Next Level which had more heart than the previous movie but it also has the addition of Danny De Vito and Danny Glover. Watching Dwayne Johnson impersonate De Vito was hilarious but I have to hand it to Awkwafina who nearly stole the movie.

Milo (Glover) and Eddie (De Vito) are former partners who used to run a restaurant, but Milo was ready to retire before Eddie was so the two fell out. Milo has come back to make peace with Eddie but things take a bad turn when they are both sucked into Jumanji and have to work together with the younger cast to escape.

It’s the Milo and Eddie dynamic that gives the movie its emotional core but Spencer (Alex Wolff) is also sympathetic as he feels he can’t live up to the character he was in Jumanji in the real world.

There are several big set-pieces and a highlight is the hanging rope bridge sequence but also Rory McCann (The Hound from Game of Thrones) who plays the villain Jurgen the Brutal. He gets to have a final fight with Dwayne Johnson which is a fitting end to the movie.

The usual things that would normally annoy me like the CGI or the fact that it’s total nonsense didn’t bother me at all because it’s a videogame then they really have free reign to do whatever they like.

It’s well paced and once again Jack Black has some of the funniest moments but I am also a huge fan of Karen Gillan who does a pitch perfect American accent; you wouldn’t even know she’s from Inverness, Scotland.

The music is an old-fashioned adventure score with elements of Lawrence of Arabia (for the desert scenes naturally) and it all just adds to the wonderful escapism.

Overall, Jumanji: The Next Level is packed with adventure and exciting set-pieces and suitable for the whole family. The cast are all at the top of their game giving us an engaging story, emotional moments and plenty of laughs.