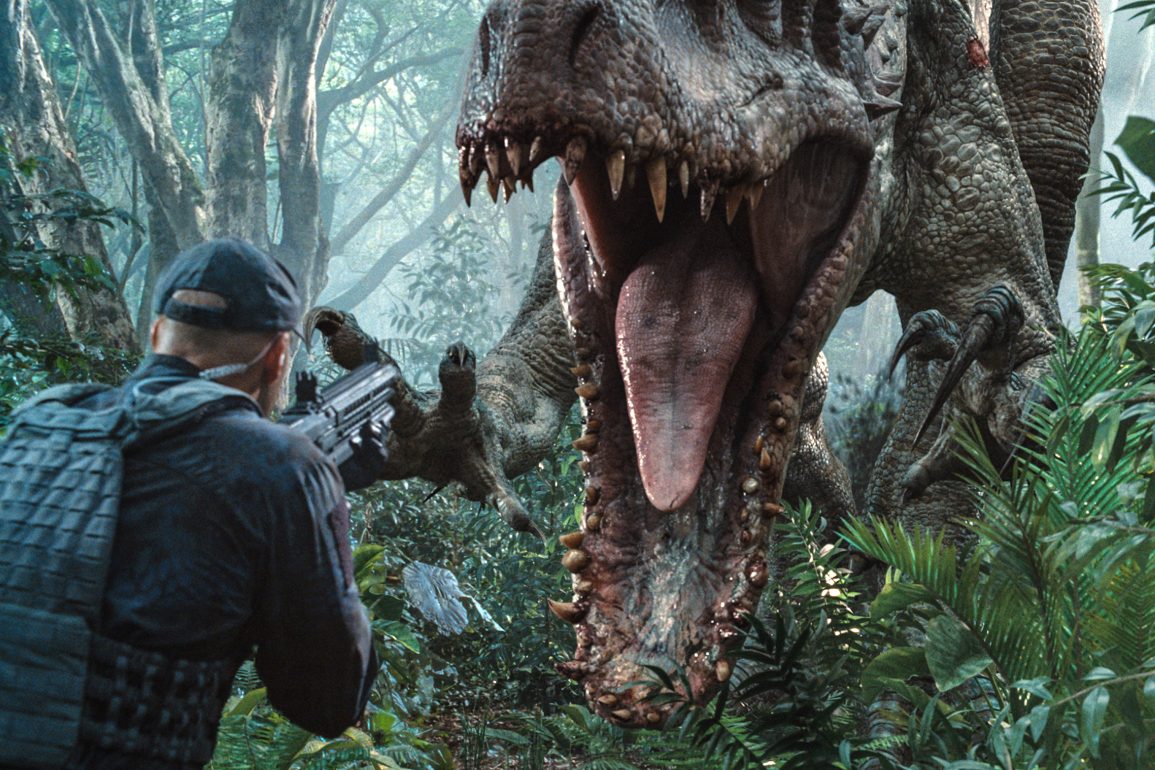 The Indominus rex readies her attack in ?Jurassic World?. Steven Spielberg returns to executive produce the long-awaited next installment of his groundbreaking ?Jurassic Park? series. Colin Trevorrow directs the epic action-adventure, and Frank Marshall and Patrick Crowley join the team as producers.
1

Jurassic World is an old-school summer blockbuster with enough thrills and dinosaurs eating people to be worth the price of entry. Sure there is poor pacing in the first half and some of the characters aren’t very interesting but it did exactly what it was supposed to and I didn’t expect anything more.

Review: It’s been 14 years since we last visited Jurassic Park and I’d be lying if I said I hadn’t been looking forward to the latest movie in the series, Jurassic World. It’s been hyped like crazy and yes, like so many other movies released today the majority of the movie was in the trailers.

A lot of the best sequences of the movie we’d already seen but thankfully there’s enough dinosaur action to make this arguably the most entertaining of the Jurassic Park sequels. The original will always be the best as this entry does lack the finesse and tension of the 1994 classic but there are some fantastic moments.

The final 20 minutes were everything you’d really want from a Jurassic Park movie and was profoundly satisfying. I was worried when we first heard about the hybrid dinosaur known as the Indominous Rex but it’s really rather awesome and I liked how they tried to do something a little different. The training of the Velociraptors was an interesting new concept and the way it was executed was spot on; it felt as believable as you could make it as they are never exactly house pets and never less than dangerous.

It does take a little while to get going and like I said, it doesn’t quite have a master like Spielberg behind the camera. I also didn’t like the 3D which looked blurry a lot of the time but for some reason there was no 2D version of the film available. I think I’ve yet to see a movie in IMAX 3D that impresses but it’s just something I’m not a fan of.

Anyway, back to Jurassic World; Chris Pratt is the best human character of the film and the fact that his name is Owen (that’s how you pronounce my name, trivia fans) makes him all the cooler. He’s just one of those actors who is immediately likeable as soon as he walks on screen and Owen is suitably different from last year’s Starlord.

The two kids were annoying in it and I wish in these movies just once the bloody kids would get eaten; there I said it. Let’s face it, it’s what we all want to see, especially in the original when Lex turns the light on in front of the T-Rex. We all wanted her to get eaten but no one would come out and say it.

So there are two brothers in this one who I didn’t really care about at all and you just know they were there to just keep the young ‘uns happy. Speaking of which, the kids in the audience seemed to have a blast and laughed during the gorier scenes, which I’m pleased about. There were some impressive deaths too but it’s not anything the little ones can’t handle. Hey, I grew up watching First Blood, RoboCop and Die Hard and look how I turned out… Hmmm… Moving on.

It’s very difficult to keep your critical faculties when watching a movie with dinosaurs in it… because they’re dinosaurs and your inner child just gets excited when you see them. When the two kids first arrive we are greeted with the Jurassic Park theme tune and you are filled with a sense of wonder, which was one of the highlights of the film. Michael Giachinno does a fine job with the score keeping John Williams’ original themes but giving it his own sound as well.

Vincent D’Onofrio once again proves what a versatile actor he is as his character Hoskins manages to be an asshole but still very different from Wilson Fisk in Daredevil.

The weakest link in terms of the cast was Bryce Dallas Howard though who was just a bland and forgettable character. She has a few fun moments but really the cool stuff is left to Owen, because his name is Owen and he’s a badass.

It’s very difficult to come up with something new when it comes to this series as you’re really just paying to watch dinosaurs eat people but there was enough in this movie to make it engaging and there were some innovative ideas. The gyroscope scene was a particular highlight and it’s difficult not to walk out with a goofy grin on your face.

Overall, I may have said too much in this review but Jurassic World is an old-school summer blockbuster with enough thrills and dinosaurs eating people to be worth the price of entry. Sure there is poor pacing in the first half and some of the characters aren’t very interesting but it did exactly what it was supposed to and I didn’t expect anything more.