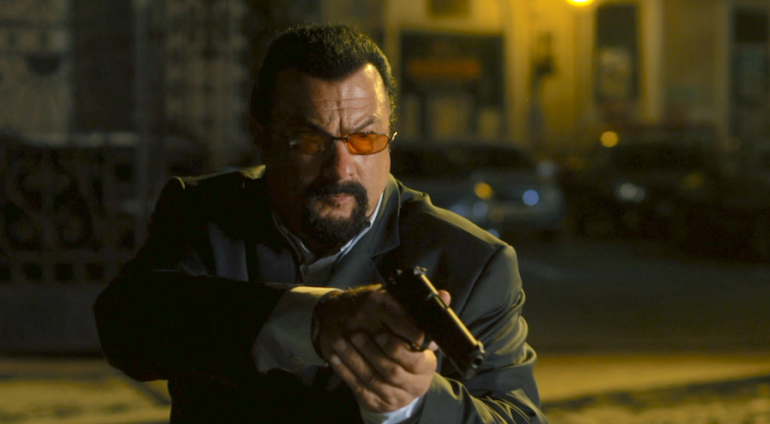 Just How Badass is This Guy?

The best moment of any action movie (except people exploding) is when the bad guy or even the hero himself is giving a little speech about just how much of a badass our protagonist is.

This mostly happens in Steven Seagal movies and I’m pretty sure he writes these lines himself because he’s such a modest little flower.

Anyway, here are a select few of my favourite action movie speeches about just how badass this guy is…

I think we have to start off with not a villain but a true American Hero in Colonel Trautman from First Blood. When talking to Teasle about what he and his men are up against, he has to explain it plain and simple:

“Trautman: You don’t seem to want to accept the fact you’re dealing with an expert in guerrilla warfare, with a man who’s the best, with guns, with knives, with his bare hands. A man who’s been trained to ignore pain, ignore weather, to live off the land, to eat things that would make a billy goat puke. In Vietnam his job was to dispose of enemy personnel. To kill! Period! Win by attrition. Well Rambo was the best.”

Bryan Mills is more than happy to let the fools who have kidnapped his daughter know just how much of a badass he is in one of the best movie phone calls of all time.

Bryan: “I don’t know who you are. I don’t know what you want. If you are looking for ransom, I can tell you I don’t have money. But what I do have are a very particular set of skills, skills I have acquired over a very long career. Skills that make me a nightmare for people like you. If you let my daughter go now, that’ll be the end of it. I will not look for you, I will not pursue you. But if you don’t, I will look for you, I will find you, and I will kill you.”

I actually have two particular awesome speeches from this very movie as Seagal directs himself and lets the world know just how awesome he is, in case we didn’t already know…

Stone: “My guy in D.C. tells me that we are not dealing with a student here, we’re dealing with the Professor. Any time the military has an operation that can’t fail, they call this guy in to train the troops, OK? He’s the kind of guy that would drink a gallon of gasoline so he could piss in your campfire! You could drop this guy off at the Arctic Circle wearing a pair of bikini underwear, without his toothbrush, and tomorrow afternoon he’s going to show up at your pool side with a million dollar smile and fist full of pesos. This guy’s a professional, you got me? If he reaches this rig, we’re all gonna be nothing but a big goddamned hole right in the middle of Alaska. So let’s go find him and kill him and get rid of the son of a bitch!”

Michael Jennings: “You wanna know who he is? Try this: delve down into the deepest bowels of your soul. Try to imagine the ultimate fucking nightmare. And that won’t come close to this son of a bitch when he gets pissed.”

Ah Under Siege 2, my not so secret shame; this particular conversation has the entire crew of bad guys filling their pants as they realise that the intruder on the train is on Casey Ryback!

Penn: Casey Ryback is a former SEAL Team captain. And a *counter-terrorism expert*.

John Wick recently brought back the “Just How Badass is this Guy” moment with the villain Viggo telling his son who he robbed.

Viggo Tarasov: “John wasn’t exactly the boogeyman. He’s the one you sent to kill the fucking boogeyman.”

Viggo Tarasov: “In a bar, I once saw him kill three men… with a pencil.”

Waterworld was one of the biggest flops of all-time and it’s not a film that too many people talk about but I always remember this scene as the little girl talks about how badass her saviour The Mariner is.

“He doesn’t have a name so Death can’t find him!

Doesn’t have a home or people to care for.

He’s not afraid of anything, men least of all.

He can hide in the shadow of the noon sun.”

Harry Callahan doesn’t need anyone to say how badass he is; his love for his own Magnum 44. pretty much says it all.

Harry Callahan: “Uh uh. I know what you’re thinking. “Did he fire six shots or only five?” Well to tell you the truth in all this excitement I kinda lost track myself. But being this is a .44 Magnum, the most powerful handgun in the world and would blow you head clean off, you’ve gotta ask yourself one question: “Do I feel lucky?” Well, do ya, punk?”

John Carpenter’s They Live is an underrated gem but our hero Nada (Roddy Piper) is also a legendary badass; once again nobody has to tell us how awesome he is as he does it with one line.

Nada: “I have come here to chew bubblegum and kick ass … and I’m all out of bubblegum.”

I’m pretty sure there are many I’m forgetting but these are the main ones that spring to mind.