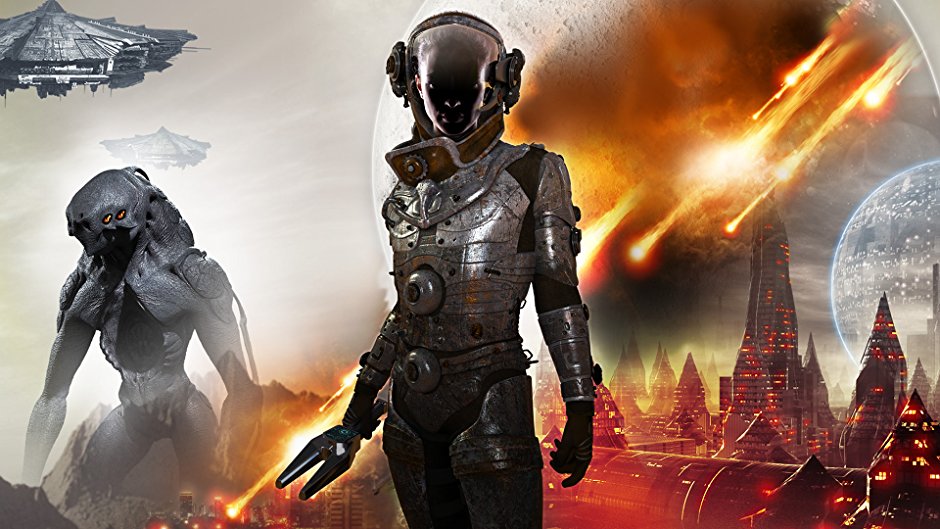 Similarities aside, Alien Covenant and director Justin Price’s Alien : Reign of Man are completely different beasts, as the filmmaker tells us in this exclusive interview.

How would you describe Alien : Reign of Man?

“Alien Reign of Man” is an action scfi thriller about the last of humanity attempting to find a new home. The problem is they sent a species there first and that species wants to survive as well. What we wanted to do was create a film that dealt with this sort of realistic idea of discovery. My producing partner KHU and I sat back thought of ways to explore Zan. Zan is the leader of this group of immune astronauts deemed “Eternals” whose sole mission is to activate this alien device that would restore life to our planet. Earth is in turmoil and whats cool about this story is, we aren’t looking to live on the foreign planet. But activating the alien device would destroy the planet.  So there are a lot of moving parts happening beneath the surface.  It makes for a very interesting journey were we discover this new world in a more believable way. I imagined what would it be like if we were instantly transported to Mars? Would we run into new species or would we run into changing weather? Where would life on the planet exist?

Who is the audience, you think?

Alien Reign of Man is for all audiences. We added great characters who all have their own personal demons. We created this amazingly cool visual effects creature from concept to screen and surrounded it with beautiful exposition.  What is great is on August 1, 2017 when Alien Reign of Man is released, audiences will be able to find pieces of the story that truly stood out for them. For the action fans there is action and for the drama fans there is a very emotional story tied to our lead. For the sci-fi fans the entire film takes place on multiple countries and we didn’t shoot in a backyard with palm trees and call it Venus.

Have you been surprised to discover a certain demographic or segment enjoying the movie that you didn’t expect to?

Anytime Keith Leopard and Uncork’d Entertainment chooses your film, it has to be pretty special. What has been great about the response is a lot of people have appreciated what we were able to accomplish at this budget range. Pikchure Zero Entertainment has been on the forefront of creating stories that meld genres for the past three years. So every time we make a film it is amazing to have such a wide array of support. I mean look we are talking about how easy it is to do a film surrounding a friend’s house and placing a few cool moments inside of it, but we have seen that story. What we wanted to do was put all of our resources into something we haven’t seen. No one is in blue jeans and t-shirts and calling themselves astronauts. Everything in the film is crafted around the future. We are in Iceland at negative degree Celsius shooting in dangerous terrain to get the shots we need to tell the story. Zan , played by Khu, was planted among these formations in Ireland and it was so dangerous that the high tide is literally seen crashing towards the film crew. We used the waves and water to add to the element of danger we imagined would exist on this undiscovered planet called Demos. But it was scary watching as it rose and rose right beneath us. I think audiences have enjoyed that. They know we didn’t cheat them while making this film.

Would you say Alien : Reign of Man is reminiscent of any other film? Any films inspire it?

I think that the film was mostly inspired by humanity and loss. We follow these astronauts as they try and activate this Spire on a planet they have never been on.  Whats great is we were able to make it stand out on its own.  The tone of the film is set for the audience to feel the longing for discovery. It is meant to force people to think about the intricacies of our future and what it means to be human. Certain characters make questionable decisions to survive in the film and I am happy with how it turned out.

For you as a director, are there any filmmakers you admire? Any of them inspire any of your directing choices on the movie?

I love James Cameron, Luc Benson, and Darren Aronofsky. I love their attention to details. I am huge fan of how James Cameron creates worlds and it is something to be admired. I also like the visual eye of my producing partner KHU who essentially lenses most of the films. I think she has a great future ahead. What I try and keep from Cameron is this idea of telling grand stories. I have yet to get away with four people in a cabin or some movie where everything happens in a virtual reality world.  That is what makes Alien Reign of Man cool to me, we tried to go there. I think I picked up that sense of pushing the envelope from great auteurs such as Cameron and Benson. There is no way we should have tried to hit three major components from location to wardrobe to VFX but why be boring right? I mean in the end we are leaving pieces of our creative soul here, why just try and get bye.

Do you talk about the similarities between Alien : Reign of Man and Ridley Scott’s movies?

No more than anyone would talk about Zombies from a famous tv show as compared to Dawn of the Dead. Dawn of the Dead being a title and Zombies being engraved into the folk lore being the key component. World war Z can exist at a time that Girl with allt he gifts and they can include zombies. Blade can exist at a time as twilight and be completely different and still both have vampires.  I think as artists it’s important to sort of remove this ownership of creative avenues. If we lived by those rules then Nolan would have thought why make a film about dreams we have Matrix for that. Alien Reign of Man is a film about a comet carrying information from the many times we as humanity have been spread throughout the Galaxy. It tetters on the idea of the galaxy being a living and conscious NOW. We introduce dark matter as a substance that is responsible for creating life and this alien device that is meant to start life on different planets. The scientific term for Aliens is Aliens and had we called them extra-terrestrials than maybe some people would wonder if it had children and bikes in it J , but  On August 1, 2017 we just hope audiences will enjoy our unique spin on the genre.

What do you think Reign of Man has that Alien : Covenant didn’t have?

I think Ridley Scott is phenomenal and his work speaks for itself. I am looking forward to Alien Reign of Man being its own entity and Justin Price’s take on sci fi exploration being a unique interpretation of space in general. I don’t see any comparisons to other artist’s work in the films I do. I think there are elements in all stories that can be traced back to many films but in general its all based on the vision of the creative team. Thank you so much for the interview!