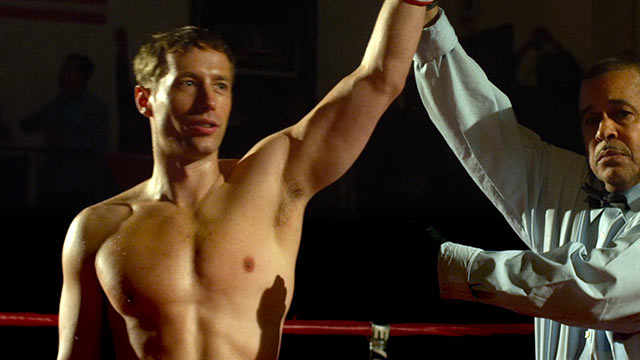 Kent Moran is the writer, producer, director and star of the boxing movie The Challenger which would sadly become the last movie that starred Michael Clarke Duncan before he passed away in 2012.

The Challenger focuses on a struggling auto mechanic (Kent Moran) in The Bronx trying to save himself and his mother from homelessness. After he meets a legendary boxing trainer (Michael Clarke Duncan), he embarks on a pugilist career that might be his ticket out of poverty.

Kent stopped by The Action Elite to chat about the movie.

You wrote, directed, produced and starred in The Challenger; what made you want to do all that?

Originally I didn’t necessarily want to do that but it was more of a reflection of the limited budget we had. So I was essentially trying to save money by wearing more hats. Initially I wasn’t going to act in it, I was just going to direct it for my brother to act in. The timing just worked out where he was filming another movie of his; I didn’t know if I could act and direct in the same movie so it was a bit of a challenge but I decided just to go for it so that’s how that happened.

Yes, I loved directing and it wasn’t as difficult as I thought it was going to be in terms of the acting and directing together. I’m not going to say it wasn’t difficult but it was manageable.

How did the idea for The Challenger come about?

Well my great uncle was a professional boxer in the early 1900’s actually and I’d always seen pictures of his old boxing photos and stuff. When I became a filmmaker I always wanted to tell a boxing story except a modern version of what it might be like for a boxer today in The Bronx starting from nothing and trying to make it to a title bout. So that was how the basic idea came about but I also wanted to play with some unique family dynamics that we haven’t seen much before. It’s basically a coming of age story about believing in yourself and finding your own path with the help of family and others around you.

You’re known as The Bronx Boy in the film and were born on New York kin real life; was the spirit of New York important to the film in the way that Philadelphia means so much to the Rocky films?

Yes, exactly!  My first film took place in New York as well; I love New York and it has a special place in my heart but for this movie I really wanted it to play a character; like at the time that I wrote it we were heavily into the recession and everything. I wanted us to feel what that was like in that area and hopefully get behind this character on his journey to the title.  There’s a line in the movie “People are just tired; they need something to believe in again” and that’s kind of how I wanted The Bronx to come into play, to be a living breathing character that could also make it to the title, so to speak.

It’s funny I was going to mention that as that line really stuck with me; it was refreshing to see a movie that was inspirational rather than focusing on the negative.

Yeah thank you and I agree; I’m glad that stuck out to you. There’s a lot of great stuff out there but there’s not a lot of inspirational things as there used to be maybe so I like to do that sometimes.

We have to talk about Michael Clarke Duncan who sadly passed away in 2012; I have to say that I think this was his finest performance, filled with warmth. Tell us what he was like and why he was right for the role of Duane?

I was blessed to be able to work with him; he was amazing to work with and I learned so much just watching him honestly and working with him so closely. What happened was I was taken to an agent meeting with his agent at the time as an actor myself and I realised that he was Michael’s agent. I was casting the movie at the same time and I just thought he would be perfect for this role. So I pitched to them and asked if they could give it to Michael and see what he thinks. He ended up responding really well to the script and came on as an executive producer and worked closely with us on set.

What he brought to the character was pretty amazing. It was definitely a meaty character on the page but when I was working with him I would just let the camera go and let him continue after what we had said on the page and just let him improvise. He was so invested with the character that he would just come up with these things and we’d let the camera roll for 3 or 4 minutes sometimes and he would just keep going and going. I was just lost in his performance and had to figure out when to call “Cut” because he was just coming up with such great stuff.

What I learned from him is that with every take he brought all the energy; everything that you saw I could have used any take. It was that good.

Was the idea of the gum wrapped in money always in the original script or was that from Michael?

That was always in the original script; now what happened was when I was training as a boxer for this movie I was training for 7 months here in Los Angeles at Wild Card Boxing Gym. Underneath that was a laundromat and when I first went in there the guy wasn’t at the desk; he was at this bodega shop across the street playing this lottery machine and he was making so much money doing this, I was shocked. I go up to him and he takes out all this gum in his pocket and they have 20 dollar bills around them.

So a lot of dialogue from that scene is from my real life experiences. He was telling me there was a boxing gym over there and that’s how I found out about it so I thought it was just so unique and interesting. It said a lot about the character where maybe he’s not making enough money in this situation so he’s spending his time over there trying to make more money. It helped define who Duane was as a character.

Duane says “Boxing ain’t what it used to be”. Would you agree?

I would agree only because lately there’s been some great boxing but there was a lull there for a while especially until MMA restarted everyone’s fighting interest. I felt like it took away from people’s interest per se in boxing but now I think, especially in the Middle-weight/Light heavyweight division we’re starting to see a lot of people of interest again. In the heavyweight though I feel like we don’t get anything like the Tyson/Holyfield fights or any of those big fights that we used to have. So yeah, I would kind of agree.

How much of your personality is in Jaden?

I tried to be as true to the character of Jaden as opposed to myself but there are definitely things from my life that I brought to portraying him. Some of the experiences that he went through are ones that I went through specifically in New York. I would say that I am quite a bit different from Jaden but I always try to being parts of myself to the character.

What was your training schedule like for the role?

Yeah it was pretty intense; so the 7 months here I wanted to make sure I was only doing the training that a boxer would be doing. I wasn’t too concerned about getting super ripped or anything like that. I just wanted to make it realistic showing a guy who hasn’t actually been boxing his whole life like so many of these other boxers who make it to the title so I wanted to start there. What I did was when I was training here I wrote some of those sessions directly into the movie. It would be about an hour and a half for a training session three or four times a week; it would start with lots of jumping rope then the days off I would run five miles. In New York is when it actually got more intense because I was doing the pre-production and then straight through production I would run five or six miles in the morning then doing a twelve hour shooting day then doing it all over again. There was a lot of that, a lot of sparring, a lot of gym work, lot of bags and all the boxing exercises. I didn’t lift any weights; I didn’t do anything other than boxing workouts.

Do you still train regularly or is that in the rear-view mirror now?

I do but not in the gym all the time; I incorporate boxing exercises into my workout now though.

In Jaden’s room there is a Rocky picture in the background. Was that film a major influence on you?

(laughs) Ah you noticed that, did you? It was and I wanted to pay a little homage to it quietly. We put that there just for fun.

Did you see Creed?

I did yeah and I really enjoyed it. Rocky was a great movie and I always go back to it, especially the first one.

I got a couple of projects; one of them is a James Dean biopic so I’m not sure which will go first but we’re going to start pitching around town pretty soon…