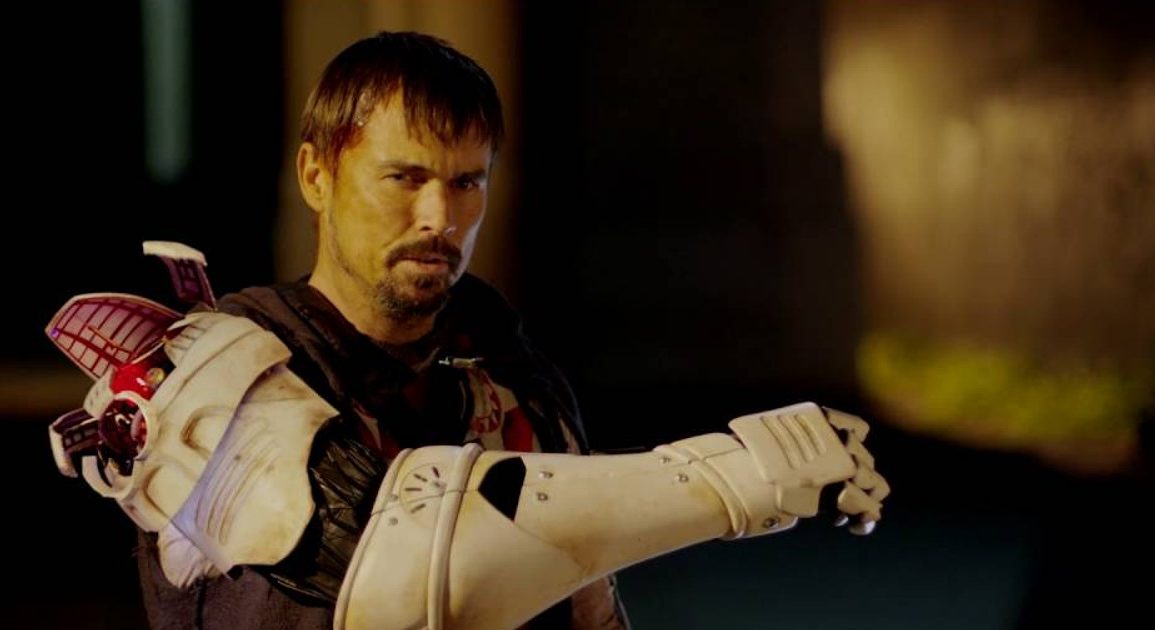 Directed by Kerry Carlock and Nick Lund-Ulrich, and based on a script by Nick Rufca, Armstrong tells of a rookie EMT officer and her partner who pick up a wounded superhero and are drawn into his mission to save Los Angeles from a shadowy organization.

We chat to Carlock and Lund-Ulrich about what’s unarguably the year’s most inimitable superhero movie.

How many months have you been on the promo trail for the film now? Has it had a festival run or release outside of the U.S?

KERRY:  We’ve just starting doing press at this point because the movie comes out October 3rd!

NICK:  We got a sales agent, Galen at High Octane, early on after completing the movie and he felt we didn’t need the festival circuit to get it out to a big audience.

KERRY:  It’s been a very interesting experience because I think it’s the indie filmmaker’s dream to be at Sundance and get to talk about the movie and build a fan base.  But we’re going right onto WalMart shelves and itunes and it’s like we have to be our movie’s biggest cheerleaders!

Is it something you enjoy – talking about the movie?

NICK: We love talking about the movie!

KERRY: It’s been a long road to get it made with a lot of ups and downs so this feels like a reward after all of that.

NICK:  We’re really proud of it and we can’t wait for people to see it.

In terms of the film itself, how close to it are you? Is it like a child you’re sending out into the world?

NICK:  It sure feels that way. We’re really excited for it to get released, but it’s also totally nerve wracking!

KERRY:  When you’ve poured so much time and money and love into something, you really want people to love it as much as you do.

NICK: We’ve basically ate, slept, and breathed Armstrong for the past 3 years so we’re excited to get it out there!

Do filmmakers, like actors, find it hard to watch their own output after everything’s done?

NICK:  We’ve watched Armstrong more times than any other movie we’ve ever seen!

KERRY: I think it’s hard to watch with an audience because you really want them to like it and it’s hard sitting there and not knowing what people are thinking.

NICK: We just had to QC an output for our upcoming Premiere and neither of us had seen it in about 6 months. But honestly, we enjoyed watching it.

KERRY:  We got sucked back in! It’s fun to see your hard work realized.

To the conception of the project. What was it about this particular project that appealed to you?

NICK: Kerry and I have talked about making a film together since our third date.  And we always talked about doing a mashup of our favorite things…

NICK:  We had fun coming up with a concept that appealed to us both.

KERRY:  And it was really important that were each invested in that way because making a movie takes a long time and we each had to have a reason to stay engaged and interested in the project.

And was the cast attached before the film was financed or did all that come later?

KERRY – We self funded Armstrong through savings and the sale of Nick’s VFX company. When we started preproduction we started casting it ourselves.

Being a superhero film, was there a check-list of things you HAD to have in the film?

KERRY – Well we wanted to do a superhero movie that was a little different than the standard fare so we didn’t have a checklist per se….

NICK – But we were always referencing comics and other superhero characters to make sure that what we were doing was different but at the same time familiar to the genre.

Can you talk to us about the different looks you considered for your superhero?

NICK: The concept of the Armstrong as a superhero went through a couple of rough ideas early on when we were writing the treatment, but we settled into the current version when we started the script.

KERRY:  We toyed with a “Batman” type hero and more super powered individuals but to fit the character we wanted, making him a technologically enhanced soldier, a “low-rent Iron Man” was the best way to go.

And what about the name of your (male) hero? Toy with different ones?

NICK:  Armstrong was the first name we came up with. We thought it was a little silly at times, but in the end it just stuck and we didn’t want to change it.

If the movie was playing in a double feature at the drive-in with another movie, what film would you suggest be the support feature?

KERRY:  For a drive double feature, we’d have to say Monster, directed by Gareth Edwards.

NICK: That movie was a real inspiration to us.  It came out right when we were in the thick of writing our script and we thought- see, it can work!

KERRY: Yeah, you can tell an intimate story framed inside of a much larger, fantastical environment and it can be thrilling and interesting and the audience will get it.

NICK:  We love that movie.  And a monster/superhero double feature is great!