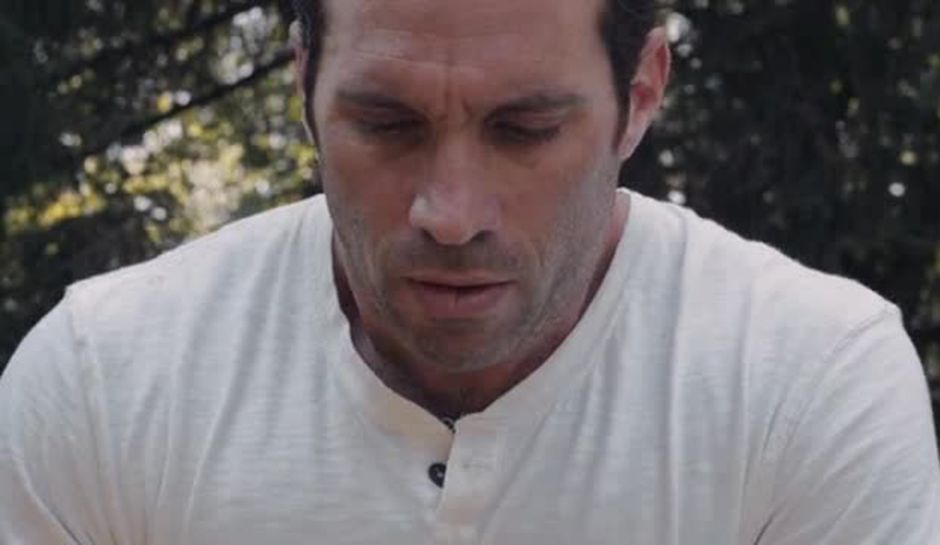 Kevin Interdonato is winning rave after rave for his lead performance in Tony Germinario’s Bad Frank, available on VOD July 7.

You served in Iraq, I believe? Were you an actor before that time or is acting something that’s happened more recently? How did one lead to the other?

Yes I did my tour in Baghdad in 2004-05. I was a wild kid, no direction with a lot of steam, and joined the Army National Guard my senior year of High School. My older brother was also in the Guard at that time, and he insisted Boot Camp was a good idea for me…When I got back from basic, went to college, tried all different classes, went to vocational school, but nothing clicked. I was lost. Stumbled across an ad in the paper for an acting class in north New Jersey. Showed up, and new immediately. It was the exploration and release I needed, what I wanted. I left college the next day.

When you first entered acting, were you being offered a particular type of role?

In the beginning, I wasn’t offered anything other than a closed door or a hang up on the phone. Long learning process for me in this business, but I did start booking work a year after I began my studies. Was going well, the roles started coming in. But, then I got the call from my Guard Unit, I was going to War, and that put a halt on everything. It was a tough one to take. But I knew what I was doing when I took my Oath. And that was that.

Was it your look that initially got you a meeting on Bad Frank, or had the producers seen you in a similar role that caught their attention?

I’ve worked with Writer/Director Tony Germinario, and Actor/Producer Brandon Heitkamp on a feature several years prior. Great guys, talented. They approached me before the script was finished, pitched me on the Story and the Role. I was in on the spot. I knew them and how they work, and a lot of my decisions these days are based on the people involved, just as much as the project itself. I’ve done some shitty movies, and given my all to filmmakers that aren’t as passionate about their work as I am about mine. Its disheartening. So its an important aspect to me. And thats part of the reason why I also open up my relationships to Distributors, Sales Reps, Actors, Crew, etc to any project I’m on…its all for the best of the film, you know?

The fight scenes. How tough were they to film? They take their toll on you?

Yea they did, took a beating, but it was fun. Wasn’t tough to film, not when your working with good people. It was choreographed minimally, we really wanted to catch the reality of everything physical, and I usually just go for it anyway.

Sounds like you’ve always been a pretty physical guy. What kind of sports did you do growing up?

Boxed. Wrestled. Football. Baseball. I try to keep active, have my workout routines, but I’m not a gym rat. I’d rather keep my hands good than worrying about how much I can bench. A big chest doesn’t stop a right cross:) But for films I just up the workouts, and lay off the Pasta (which is the hardest part).

How different a movie do you think Bad Frank would’ve been had it been a pricey, big studio flick?

We captured magic in a bottle with Bad Frank. Each day after filming, we all sat back and said ‘Wow, that was a good day’. Each person was actively interested in the film, and brought their A-game. Felt like being on an All-Star Team. We all got to know each other well, and still keep in touch. Everyone on that small set was a true renegade, and thats why I love Indies…I dont think Studio projects are like that. Creatively it would been ‘bigger’, but thats not what the original vision was.

Do you think Jersey is a character itself in the film?

We filmed in my home state but it really didn’t serve a creative purpose in the film. Locations, accessibility, cost, it all worked out to shoot there. When doing smaller-budget Indies, you don’t necessarily need to worry about tax credits if filming in Jersey. What lacks in credits is remarkably made up for by the people there. Everyone wants to help, be involved, and no-one expects anything in return. In LA and other big filming locations, everyone has their hand out. That’s why I love Jersey.

How much pressure do you feel, knowing the movie rests on your shoulders? Is that a daunting thought?

Well now that you mention it! Yea the Pressure’s there. But I don’t get caught up in it.

Working as a Lead on a film, its the only time in my life I’m fearless. I want the weight of it. I want the ball on the Goal-line. Its exciting and daunting, but I feed off that energy. I’m obsessive and extremely focused when preparing for a film, like a fighter preparing for a match. Everything else stops. I take my responsibility very seriously. People put money and time into the Project, and faith in me….I dont ever take that for granted.