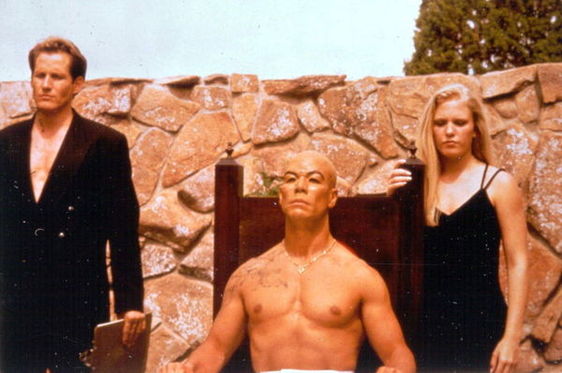 Despite some terrible make up for Tong Po and a frustrating open ending Kickboxer 4 has enough action and cheese to be pretty entertaining. Probably one of director Albert Pyun’s best films.

Plot: David Sloan must travel to Mexico to save his wife from a savage drug lord who’s also an old nemesis.

Review: The Kickboxer sequels really shouldn’t be as entertaining as they are and Part 4 is no different. Sasha Mitchell returns as David Sloan and it’s funny how different his character is in this movie compared to Kickboxer 2 and 3. In Part 2 he’s reluctant to fight, but is finally goaded by Tong Po as he tries to regain his honour after killing David’s brother Kurt (JCVD). In Part 3 he becomes a one man army and takes on a human trafficker.

This time David is in prison after being framed but when his wife is kidnapped by Tong Po, the DEA let him out to take part in Tong Po’s fighting contest and rescue his spouse.

I’m just going to get this out of the way right now; the make up for Tong Po is probably the worst make-up I have ever seen in any movie… ever. This time he’s played by Kamel Krifa and he appears to have a Mexican accent. Michel Qissi played Tong Po in the other movies and he underplayed the role, and for the most part said very little which made him all the more intimidating.

Now he is almost a cartoon and doesn’t feel like the same character. They probably should have just made the villain another character rather than wanting to bring back Po.

On the plus side, the series does essentially get back to its fighting tournament routes and doesn’t skimp on violence and impressive fight scenes. Oh and there are plenty of bewbs too, nudity lovers!

Sure some of the acting is ropey but it’s well paced and Sasha’s character David Sloan is suitably bad ass and likeable.

There is an epic bar fight near the beginning which has David take on an entire group of bikers; I love how in movies like this everyone knows martial arts, even random bikers.

It’s also cool to see that there are female fights in the tournament, which is a change from the norm.

It was a bit annoying after all the build-up though that Tong Po gets away at the end making the ending unfulfilling.

Overall, despite some terrible make up for Tong Po and a frustrating open ending Kickboxer 4 has enough action and cheese to be pretty entertaining. Probably one of director Albert Pyun’s best films.