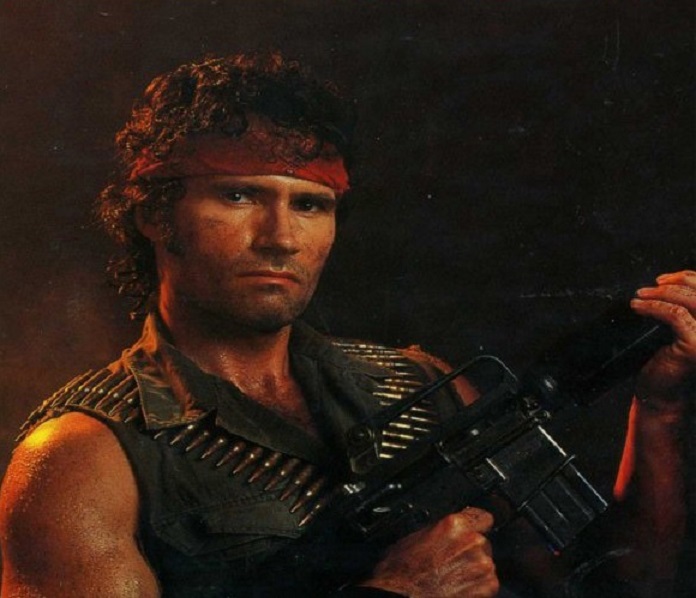 Kill Crazy is pretty rotten with a lame protagonist and annoying pacing issues. There is some decent action in the end but if you want a classic One Man Army movie then stick to Rambo.

Plot: Five Vietnam vets, on release from a mental hospital, think they’re headed for a weekend camping trip. Instead they become target practice for an army of killers playing violent war games. It’s a massacre until one of the vets becomes a machine of revenge.

Review: I remember watching the trailer for Kill Crazy and really looking forward to checking it out; it looked like the kind of cheap exploitation flick I’ve always enjoyed. Imagine my surprise when it was actually more terrible than I could have imagined.

You know when a dog is a bigger hero than your lead, then you have a problem. David Heavener plays Alexander Grady Puckett, the most useless ex-VET I’ve ever seen.

He spends most of the movie being beaten up and looking scared, acting like a little bitch. I was hoping he’d be a Rambo-style bad ass which he almost becomes at the end, but by that stage I stopped caring.

The bad guys were total scumbags and I wanted them to get what they deserved, especially the guy who keeps raping everything in sight… male or female. His death is suitably violent though as his car blows up and he slowly burns to death… which is nice.

There is far too much singing and talking when there should be necks breaking and heads exploding. Oh yeah, the dog! So during one of the many times Puckett is captured, he gets buried alive. Rather then being awesome and getting out of it himself, he gets saved by the dog that digs him out of the hole. Puckett? You SUCK!

It is surprisingly disturbing in places, like I said I wasn’t expecting there to be rape in it, which was… a downer to say the least.

The acting actually wasn’t that bad, at least in terms of low budget exploitation flicks. The action picks up in the last 15 minutes but Puckett is such a crap hero that I just wanted it to be over. It also felt longer than it was with some real pacing issues.

Overall, Kill Crazy is pretty rotten with a lame protagonist and annoying pacing issues. There is some decent action in the end but if you want a classic One Man Army movie then stick to Rambo.