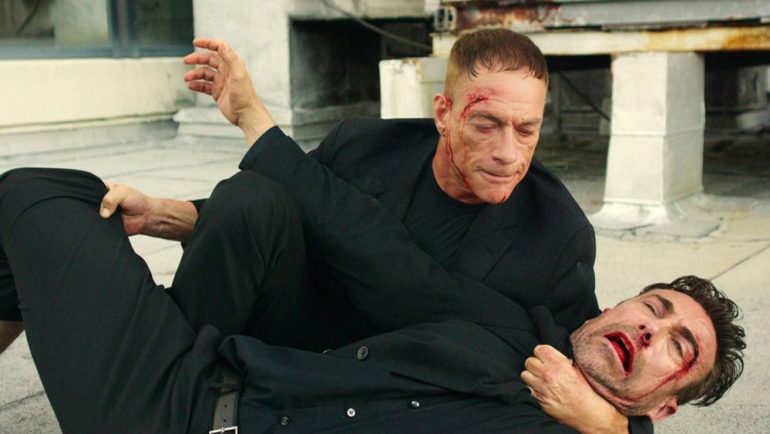 Plot: After a massive shootout, a mysterious stranger (Van Damme) arrives at a local hospital on the brink of death. Then, a foreign gang brazenly comes to the hospital to hunt him down. His nurse, the sole surviving witness to the follow-up shootout, must face an FBI interrogation that unlocks a plot of international intrigue and revenge. With enough twists and turns, KILL’EM ALL will keep you guessing until the final bullet is fired.

Review: It’s no secret that JCVD is my favourite action star of all-time; I grew up watching his movies and my dad would always take me to see any new Van Dammage in the theatre.

When I heard that Kill ‘Em All was going to finally unite Bloodsport series stars Jean-Claude Van Damme and Daniel Bernhardt I was expecting great things. Sadly, despite having an interesting premise JCVD just looks like shit throughout the movie and some of the fight scenes are quite dull.

In Pound of Flesh he’d had one of his kidneys removed and was trying to get it back so he always looked like he was at death’s door. In this movie he also looks like he is near death again and you can’t help but feel that we’ve seen this before. I guess I’m just fed up of seeing my childhood hero look like he has dead eyes and displaying zero personality when I know fine well he oozes it from every pore. Although Welcome to the Jungle wasn’t a great film we at least got to see a glimmer of the old Van Damme where he smiled and had that spark back but it’s gone again for this rather lifeless actioner.

Daniel Bernhardt has had a great career over the past few years playing some memorable villains in the likes of John Wick and Precious Cargo so as expected he pretty much owns the movie. He has never lost his charisma or fighting ability and still looks great on screen. I would love to see Van Damme in a movie like John Wick; something with style and finesse where he gets to be cool again with some memorable action scenes.

We also have Peter Stormare as an FBI agent who doesn’t trust a nurse (Autumn Reeser) he’s interrogating after a massacre at a hospital. Is she who she says she is or is there more to it? Oh wait, I don’t care. I did find that a bit too much time was spent in the FBI office when really we just want to see JCVD Kill ‘Em All as the title suggests.

Reeser is a fine addition to the cast and her big fight scene against Alvira (Mila Kaladjurdjevic) is one of the best moments even if the fight isn`t all that spectacular. She is arguably the best actor in the film too actually showing emotions and making you nearly care about her even if you aren’t quite sure if her story is for real.

There is at least a high bodycount and there are also plenty of blood squibs which are always welcome. There’s a fight between father and son with JCVD taking on Kris Van Damme which was funny as the characters aren’t related and yet they both have exactly the same fighting style. It’s a little short but I still enjoyed it.

The reason we’re here though is for Van Damme vs. Daniel Bernhardt and it’s as long as it needs to be but you can still tell that JCVD is using doubles in parts and is incredibly disappointing.

Most Van Damme movies I can rewatch again and again but I doubt I will sit through Kill ‘Em All again which was really quite a shame.

Overall, Kill ‘Em All has an interesting story but I’m sick of seeing Van Damme look like shit on screen and would like to see him display some personality again. As big a fan as I am of him and Bernhardt it’s difficult to recommend anything about this movie. How about a true Bloodsport sequel instead?