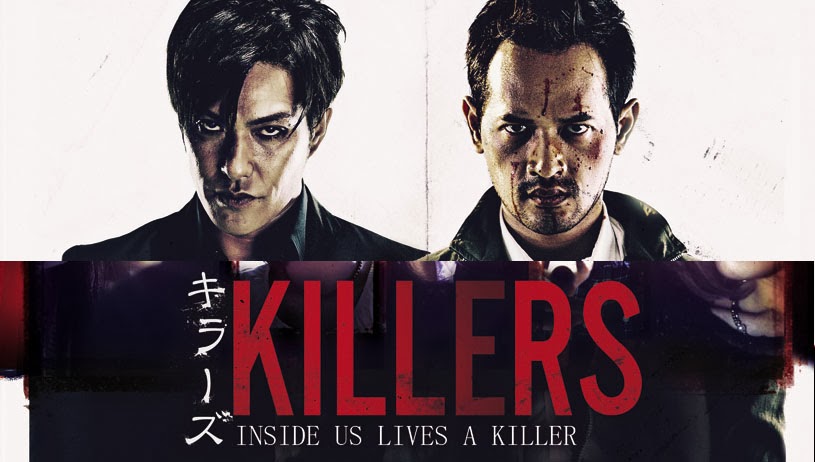 Killers is a very challenging watch and won’t be for everyone but the acting, characters and unique story will keep you engaged until the very end.

Plot: A psychopathic Japanese executive accidentally triggers a journalist’s ‘dark side’. They begin to connect over the Internet and make a complicated bond.

Review: On IMDB this movie is classed as Action/Crime/Drama but really it’s more of a horror movie; Killers is one of the most disturbing movies I’ve ever seen and have to admit that I had to stop it a few times, wondering if I wanted to continue.

Needless to say I did because I’m pretty sick, but be warned this is a tough movie to sit through. It’s graphically violent and a particular scene involving a woman and a baseball bat will stay with me for the rest of my days.

So it’s not exactly a barrel of laughs and yet despite being disturbing, once you start you have to sit through it to see how it’s all going to end.

Killers is an exploration of darkness and paints a very bleak view of the world; it has few moments of levity and as the story progresses it’s hard to sympathise with our two protagonists.

Kazuki Kitamura steals the movie as Nomura, the serial killer who has no remorse or mercy for his victims. When he finds Bayu (Oka Antara), a journalist who has been pushed too far and becomes a vigilante, he sees a kindred spirit. He talks him through his kills but Bayu isn’t the same as Nomura and the situation spirals out of control. Bayu begins to alienate his family and things go from bad to worse.

Nomura reminded me a little of The Joker, except far more sadistic but he still has a slightly playful side which does add a few moments of very dark humour. The finale in the old building is very reminiscent of The Dark Knight with Harvey Dent holding Gordon’s family hostage… except this is far nastier.

Despite the dark tone and hardcore violence, it’s the characters that keep you watching; Bayu begins as a relatively normal journalist but when he sees so much corruption going on around him, he eventually reaches breaking point. Where Nomura kills because he enjoys it, Bayu does it because he feels like there is no other choice.

The acting by the entire cast is excellent and I look forward to seeing what the cast and directors come up with next… somehow I doubt it will be a romantic comedy.

You know it’s not going to have a happy ending and yet it still manages to be unpredictable and doesn’t follow a formulaic narrative.

There is also an interesting study of technology and social media giving the movie more depth and the final line of the movie sums it up perfectly.

Despite not really being an action movie, there are a few fights and shoot-outs but like I said, it really is more horror so don’t be expecting The Raid. This is the production company behind The Raid so if you’re thinking this is going to be another martial arts classic you’d be dead wrong.

Overall, Killers is a very challenging watch and won’t be for everyone but the acting, characters and unique story will keep you engaged until the very end.