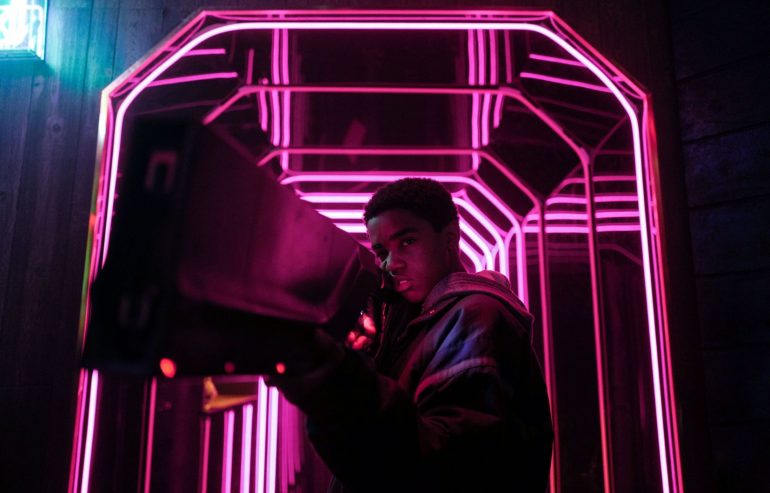 Kin wasn’t what I expected with more grit and edginess than the trailers showed us; that’s no bad thing but I couldn’t help wanting more sci-fi goodness rather than family drama.

Plot: While scavenging for copper wire, Detroit teenager Eli Solinski stumbles upon a high-tech gun that holds special powers. When his brother, Jimmy, lands in trouble with a local crime boss, the two siblings take the mysterious weapon and go on the run. Eli and Jimmy now find themselves in a life-and-death battle against an army of thugs and two heavily armored, futuristic soldiers who want their gun back.

Review: I had wanted to see this on the big screen when it was briefly in theatres a few months back but as usual I most likely couldn’t afford it. The trailers to Kin had me expecting a very different kind of movie from what I watched last night. For some reason I thought this was going to a neon soaked sci-fi actioner with some hints of Stranger Things.

It absolutely was nothing like that and was more of a gritty crime drama combined with a coming of age story and some sci-fi elements all meshed together.

The opening 10 minutes are expertly put together establishing our protagonist Eli Solinski (Myles Truitt). There is little in the way of dialogue but using the camera to tell the story we find out that Eli’s mother has passed away, he has discipline problems at school, is a bit of an outcast, steals copper wire to make extra cash and (most importantly) he has discovered a bizarre looking device that just might be an extra-terrestrial weapon.  He has also been suspended from school and is living with his father Hal (Dennis Quaid) who is stern but loving.

Eli’s brother Jimmy (Jack Reynor) is released from prison and we discover that he owes some bad men money for protection money. The group are led by Taylor Balik (James Franco) who wants what he is owed yesterday. Without spoiling anything I can say that things don’t go as planned and our two brothers end up on the run and a cross country roadtrip ensues.

I found with Kin it didn’t really know what it was trying to be or who the target audience was. It is most certainly not a children’s film as there is violence, swearing and stripclubs in it… admittedly without nudity but still.

While on this adventure the two estranged brothers bond and find their new alien weapon is very useful. I wanted to see more of it and the sci-fi side of the story far more than what we got. It feels like it is teasing another movie which would be a potential sequel which we will likely never see so by the time the end credits role you’re sitting thinking “Ok…” but feel nothing.

In its favour it’s unlike anything else you’ll see this year and is refreshingly unique so we can’t complain that there is no original content out there; it’s just not the movie you’re maybe expecting it to be.

The filmmakers are clearly fans of old-school action though with a supporting character called Dutch and at one point we see Eli playing an arcade machine of Terminator 2.

Myles Truitt is an immediately sympathetic protagonist and is proving himself a rather gifted actor as we are rooting for Eli every step of the way. Jimmy loves his brother but seems incapable of not getting into trouble so we know things are going to get worse before they get better.

James Franco is perfect in this kind of role as a sleazy criminal; he is reminiscent of Gator in Homefront so he is just a hateful monster with no redeeming qualities.

The pacing is a little slow in parts and as I said it isn’t quite as sci-fi as I would have liked; the two alien motorcyclists are unbelievably cool and steal every moment they are on screen – they just aren’t in it enough. It’s really only the final 20 minutes when the action kicks into high gear but even then it never quite delivers the spectacle you’d want to see. The alien gun is one of the coolest weapons I’ve seen for a few years so if we do get a sequel here’s hoping we get to see it used to more devastating effect.

Overall, Kin is a bit of an oddity and not as action-packed as it could have been but there are enough original ideas and entertaining performances to be worth checking out.