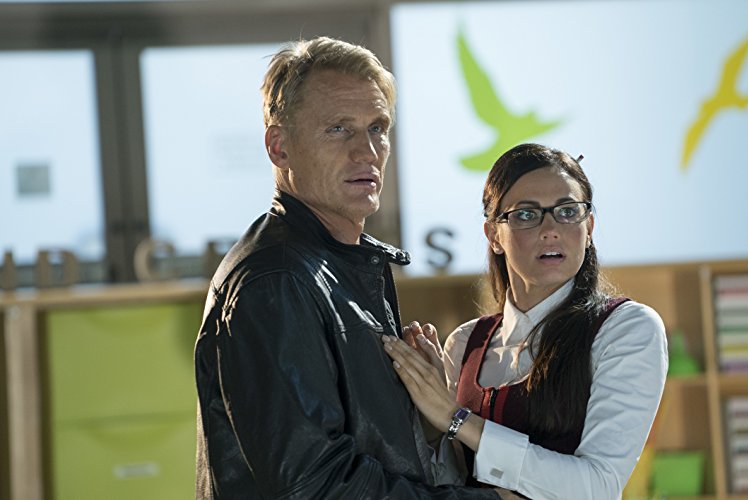 Kindergarten Cop 2 wasn’t quite the train wreck we expected but it’s hardly great either. There were a few entertaining moments and Dolph is always watchable.

Plot: A gruff FBI agent goes under cover as a kindergarten teacher. He’s there to recover stolen data, but first he’ll have to learn to survive in the politically correct world of elementary education.

Review: Let’s face it, we all love the original Kindergarten Cop starring Arnold Schwarzenegger; it was exactly what you expected it to be and became a bit of a family action comedy classic of sorts. When we heard about this belated sequel there was a shrug of indifference and we all figured it would suck.

After watching it last night I have to admit it was better than I expected; it had a few nice digs at the PC culture of trying to please everyone which was refreshing and Dolph Lundgren was likable as the lead as well.

Storywise it follows pretty much the exact same structure as the original movie but hey, if it ain’t broke then don’t fix it.

Aside from the odd smirk-worthy moment though the script really isn’t all that amazing and at no point did it have me laughing out loud. Arnie had so many classic lines in the original like “it’s not a tumah” and other such beauties but there really isn’t much to quote here. None of the kids are developed as characters and are really just… there; they aren’t even particularly funny which is a shame as there could have been potential.

It also feels quite long with a side-story about Dolph dating a hot kindergarten teacher which kills the pacing. The villains are pretty one note and forgettable too but it does at least have some decent production values and what action there is was well done.

A shoot-out at the start was pretty cool and a brief fight scene between Dolph and two goons and a climactic fight with the main villain but aside from that there really isn’t anything spectacular.

Overall, Kindergarten Cop 2 wasn’t quite the train wreck we expected but it’s hardly great either. There were a few entertaining moments and Dolph is always watchable. I’d probably watch a 3rd movie as long as it had Jason Statham calling the kids “little cahnts” and was named Kindergarten Cahnt. No? Well, I’d watch it…