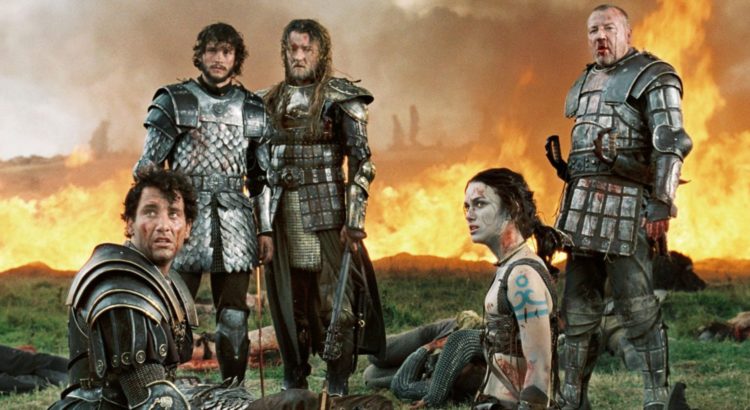 King Arthur has one of the all time great Hans Zimmer scores and some spectacular battle scenes, but Clive Owen was miscast as the lead and struggles with some of the dialogue and speeches. The film also lacks any real heart and is really just empty spectacle; it’s not an amazing movie but the director’s cut on Blu-ray is worth checking out as it is a better movie.

Plot: In this interpretation of the classic tale, Arthur (Clive Owen) is a cavalry officer in the Roman army defending Hadrian’s Wall against rebellious Britons. He and his troops are expecting to be relieved but are instead sent on a risky mission to rescue the Roman family of Marius Honorius, who proves a despicable torturer of pagans. Arthur frees one of them, Guinevere (Keira Knightley), who in turn brokers a truce between Arthur and the Britons so as to ward off an invading Saxon army.

Review: I ended up blind buying the Director’s Cut Blu-ray of this a few years ago simply because I heard the music score, which is one of Hans Zimmer’s all time best. The track ‘Woad to Ruin’ is an instant classic and is the perfect battle hymn; ‘Tell Me Now’ features the ghostly vocals of Moya Brennan from Clannad and creates a haunting melody, giving the film a more Celtic quality.

When King Arthur was originally released it had a lot of cuts to get a PG-13 rating (sigh) but this director’s cut has all of the violence back in it and also has some more character driven scenes which give the story a little more depth. The point of this film was to give a more realistic take on the King Arthur legend so there is no magic or fantasy elements and is for the most part successful.

There is noticeably more violence including decapitations and spurting blood. A Pict also gets shot in the eye with an arrow which is pretty graphic… and awesome. We also get a bit more backstory from Arthur with some extra footage of him as a child with his mother.

There are many more differences but I won’t go into them all here; this is certainly the superior version, but what of the quality of the film itself?

Well, there is plenty to enjoy here but the main problem with King Arthur is the lead actor. I always thought Clive Owen would have been a great James Bond however I do think he lacks a certain charisma, especially as Arthur. He delivers the odd clunky line without a single facial expression and he looks quite uncomfortable in the battle armour. He just doesn’t fit this role at all and you feel nothing for him; I didn’t care if he lived or died in the end and that’s kind of a big deal.

Merlin is portrayed more as an honourable warrior and is played nicely by Stephen Dillane who you’ll know better now as Stannis Baratheon in Game of Thrones.

Ray Winstone is always good value and spends most of the film shouting “RUS!!” which I’m sure made sense at the time.

I liked seeing Mads Mikkelsen play a rare hero and his character Tristan is one of the finest elements of the film; he’s a man of honour and a great warrior.

Keira Knightley transforms in this movie; Guinevere is no longer just a love interest but a vicious warrior woman who wants help to free her country; this is one of her best roles and it’s refreshing to see a female warrior kick some ass rather than waiting to be rescued by the hero.

The best thing about the film (apart from the score) was Stellan Skarsgaard, I think this is the first film I’ve seen where he plays a villain and he did a damn fine job. He really made the character feel authentic and you really hated him; his final fight with Arthur is thoroughly satisfying and this director’s cut is a bit more brutal too.

The realistic approach is certainly laudable and the battle scenes are genuinely spectacular; the final 45 minutes blew me away and there’s a real sense of scale with no noticeable CGI. The Ice Battle was incredibly well executed and definitely one of the action highlights of the movie.

It feels like the studio were trying to cash in on the success of Gladiator but King Arthur lacks the heart, which is what made Gladiator such an instant classic.

Overall, King Arthur has one of the all time great Hans Zimmer scores and some spectacular battle scenes, but Clive Owen was miscast as the lead and struggles with some of the dialogue and speeches. The film also lacks any real heart and is really just empty spectacle; it’s not an amazing movie but the director’s cut on Blu-ray is worth checking out as it is a better movie.