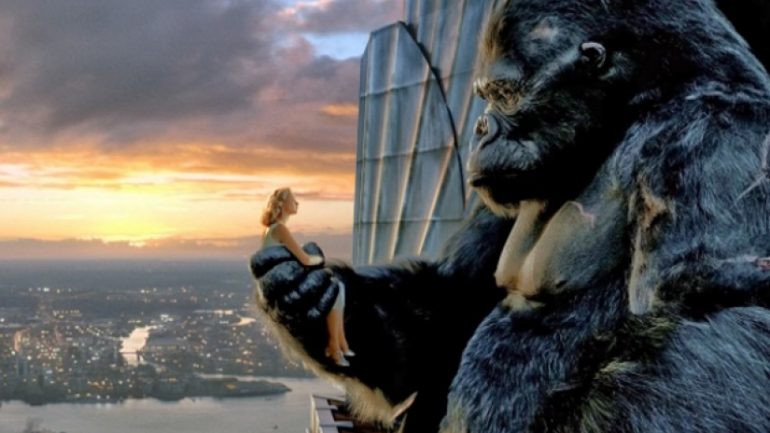 King Kong is stupidly long and could have had several scenes removed; it also has some average special effects but if you’re a monster movie buff like me then you’ll thoroughly enjoy it. Kong himself is brought to stunning life and the humans feel like real people rather than just there to move the story along.

Plot: In 1933 New York, an overly ambitious movie producer coerces his cast and hired ship crew to travel to mysterious Skull Island, where they encounter Kong, a giant ape who is immediately smitten with leading lady Ann Darrow.

Review: Hard to believe King Kong is 10 years old this year so to celebrate I thought I’d review the extended edition of the film.

If there’s one thing this film certainly needed it was be longer… or not. This extended version of the film is now nearly 3 hours and 20 minutes which is pretty ridiculous but I have to admit that there’s almost enough monster carnage to keep it engaging.

For me, the biggest slog is the first hour which focuses on the pesky humans; it takes far too long to actually get to the island and really kills the pacing. However, rather than being bland like last year’s Godzilla I really liked Anne Darrow (Naomi Watts) and Jack Driscoll (Adrian Brody). We get to spend time with them and the other cast members where rather than just feeling disposable, they are all given room to breathe and develop.

There is also plenty of humour which is something the po-faced and lifeless Godzilla really lacked. Most of the comedy comes from Andy Serkis’ Lumpy the Chef with lines like “There’s only creature on Earth that could leave footprints like this… the abominable snowman”. Sadly Lumpy dies one of the most unpleasant and nasty deaths of all time. It’s literally up there with the toxic waste death of 1987’s RoboCop. He is basically eaten alive by giant wormy, slug things which is just plain icky.

Kong himself is a wonder of modern technology with amazing motion capture work by Andy Serkis; like I said in my versus blog recently, rather than feeling just like a monster Kong has real personality and by the end of the film your heart breaks for him.

In terms of action, the definite highlight is Kong battling 3 Tyrannosaurus Rex while trying to protect Anne. He literally rips the jaw off one of them and throws the other ones around like they were rag dolls.

In this extended cut there is more monster action with a Triceratops attacking Driscoll and his men as they search for Anne. This is my favourite addition as it’s really well executed and immediately shows how dangerous Skull Island can be, no matter how well armed you are.

Another new scene is a giant serpent monster in a swamp which attacks the men and actually kills a few; Jack is thrown overboard and the monster is the stuff of nightmares.

Speaking of nightmares, there is also an extra moment in the insect pit where Carl Denham (Jack Black) has a little speech and shows that he’s actually starting to lose it on this island. I have to admit that Black was quite a revelation in this movie and it was nice to see him tackle a more serious role. You do end up hating his character so much though that by the end you’re annoyed nothing eats him.

There are however, only so many monster attacks you can watch before it becomes quite tiresome. It doesn’t help that a lot of the special effects are sub-par and you can tell all the money was put into Kong himself. It’s mostly the backgrounds that look too much like blue screen in parts which really took me out of a few scenes. It’s strange how this came out over a decade after Jurassic Park and the effects in this are inferior.

James Newton Howard provides a beautiful score and the theme that plays over the Central Park scene towards the end is really quite moving and really helps to give the movie genuine heart.

Overall, King Kong is stupidly long and could have had several scenes removed; it also has some average special effects but if you’re a monster movie buff like me then you’ll thoroughly enjoy it. Kong himself is brought to stunning life and the humans feel like real people rather than just there to move the story along.