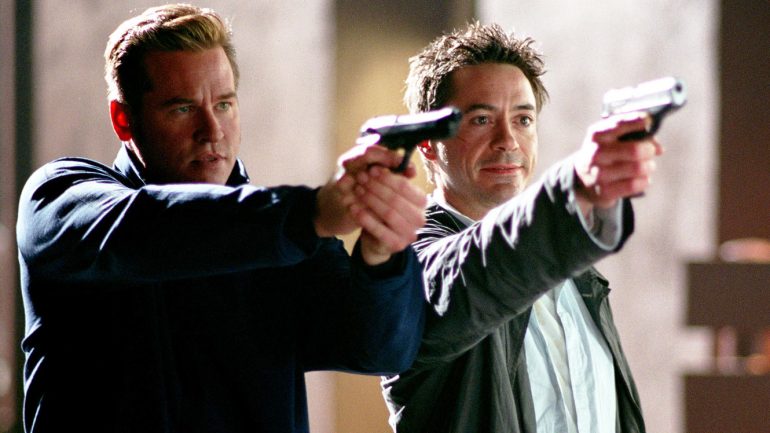 Kiss Kiss Bang Bang is just an excellent, unpredictable flick that gets better every time you watch it and needs to be on your yearly Christmas viewing list.

Plot: Two-bit crook Harry Lockhart (Robert Downey Jr.) stumbles into an audition for a mystery film while on the run from the cops. Winning the part, he lands in Hollywood, where he’s flung into a tangled, murderous conspiracy with his childhood sweetheart, Harmony Lane (Michelle Monaghan), and hard-boiled private eye Perry van Shrike (Val Kilmer). This deadpan, affectionate parody of film noir tropes is named for film critic Pauline Kael’s influential 1968 collection of film reviews and essays.

Review: I feel like this movie doesn’t get talked about enough by people which is a shame as it’s one of Shane Black’s most entertaining pictures. After watching any film written by him, I will always feel inferior as a writer. His dialogue is so good that I don’t think there is another action screenwriter that comes close.

Kiss Kiss Bang Bang is very much an underrated classic with great performances by all of the cast especially RDJ and Val Kilmer, both of which have some sparkling dialogue.

What it lacks in story it makes up for in sheer entertainment value and although Kiss Kiss Bang Bang isn’t technically an action movie it has a few action scenes to keep things moving It’s more of a Noir piece with Robert Downey Jr. at his smart ass best and Val Kilmer even snarkier.

I love the music score too from the underrated John Ottman and there are hints of the Catch Me if You Can score from John Williams giving it a playful side.

Overall, Kiss Kiss Bang Bang is just an excellent, unpredictable flick that gets better every time you watch it and needs to be on your yearly Christmas viewing list.