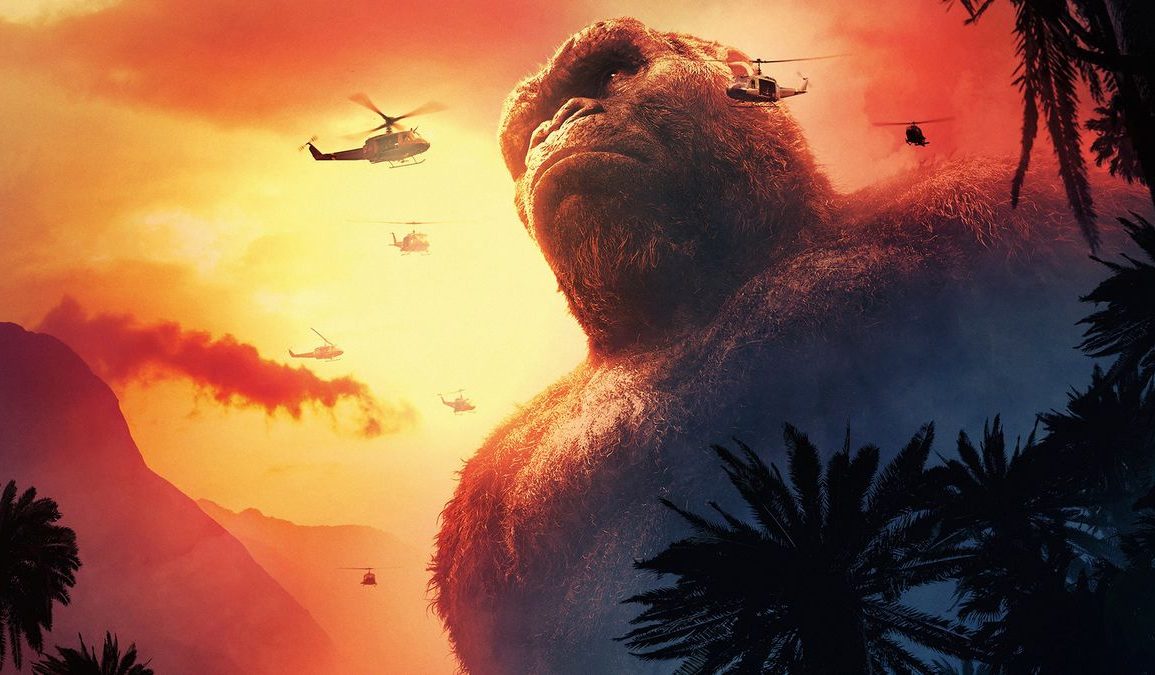 Skull Island should be watched on as a big a screen as possible as this movie is huge; it;’s a shame we never really care about any of the humans but we’re here to see Kong do his thing and for the reason alone this movie delivers.

Plot: A team of explorers and soldiers travel to an uncharted island in the Pacific, unaware that they are crossing into the domain of monsters, including the mythic Kong.

Review: I’ve always loved monster movies ever since I was a little kid; as I’ve gotten older you’d have thought that I’d have grown out of it and you’d be wrong. I still love my Godzillas and King Kongs so I was really hyped for Kong: Skull Island ever since it was announced a couple of years ago. Every movie has to try and set up an expanded universe these days and when I’d heard they were creating a monster-verse my inner 12 year old couldn’t help but smile. Monsters punching each other in face? Bring it on!

I enjoyed the 2014 reboot of Godzilla from Gareth Edwards but I’ll be honest and say I didn’t love it; I thought it spent too much time with bland humans and killed off the most interesting character halfway through but after tonight I will stand up and say that Kong is the real king of the monsters. Skull Island starts off with two planes crashing on a beach and the pilots shortly parachuting down afterwards. They fight and run off into the jungle only to come face to face with one of the main residents. Cut to opening credits. This is something quite different from what we’ve seen before and rather than taking an hour to see see the big ape himself it doesn’t waste any time in getting a team together to explore this uncharted island.

Where the 2014 Godzilla would frustratingly cut away just when the action was getting good, Skull Island lets you see everything and when Kong battles with various other creatures it’s really everything a fan could ask for. As the team arrive and foolishly start dropping seismic charges, this pisses off a certain ape who comes looking for them and attacks in what is one of the best executed scenes in recent memory. He throws trees and uses other helicopters as weapons as he brings the team down trapping them on the island and it’s genuinely nightmarish.

This is the best Kong has ever looked and he has such expressive eyes that although you know he’s synthetic you are drawn in and believe he is real. He has also never been so fierce and his fights with the other monsters are thrilling and visceral to watch. He still has a soft spot for the ladies though and remains the island’s sole protector so we know he isn’t the real villain.

The other creatures are quite terrifying and there are some surprisingly horrific deaths, although nothing to match Andy Serkis’ demise from 2005’s King Kong (as discussed the other day). The monsters were different from what we’ve seen before so it didn’t feel like a rehash of the Peter Jackson film either.

Skull Island has this creepy atmosphere and a fantastic visual style where it looks like the sun is always setting, giving everything an orange glow. It helped that it looked like it was filmed in a real place (Vietnam) too giving us genuine locations rather than soundstages and greenscreen which helps in creating a grander sense of scale.

This is essentially ‘Apocalypse Kong’ with many references to Francis Ford Coppola’s classic war movie which were apparent even in the marketing but I don’t want to go into too much detail and spoil anything.

The choice of music worked well and the score by Henry Jackman was superb and one of his best yet; it has a 70’s vibe with some surreal guitars which just added to the whole experience. I will be jumping on iTunes ASAP to purchase the music as it really is phenomenal stuff.

In terms of flaws I guess I would say (like with any other monster movie) that the scenes with the humans in the middle section are slightly less interesting than when creatures are fighting but we do need some characterization. Samuel L. Jackson is also the same as he is in everything but that’s really why we love him and he definitely channels a bit of Brando at times…

From the trailers I was worried that John C. Reilly was going to be the annoying comic relief but thankfully he wasn’t and although he had a few moments of levity he was far from a Jar Jar type character. I cared what happened to him and the rest of the crew and wanted him to get home safely. Tom Hiddleston proved he’s got the chops to be an Errol Flynn like hero who faces danger with the stoicism of a true warrior and you’re rooting for him all the way. Brie Larson gets to kill a few nasties too so she isn’t some damsel in distress but a believable ass-kicker and I really liked her.

Overall, you’re probably thinking I’m being too generous to Kong: Skull Island as it is just a silly creature feature but I went in knowing exactly what I was in for so it delivered everything I wanted to see and that inner 12 year-old of mine had a goofy grin from beginning to end. The post-credits scene beats anything Marvel has done to date and I can’t wait to watch the monster-verse expand.