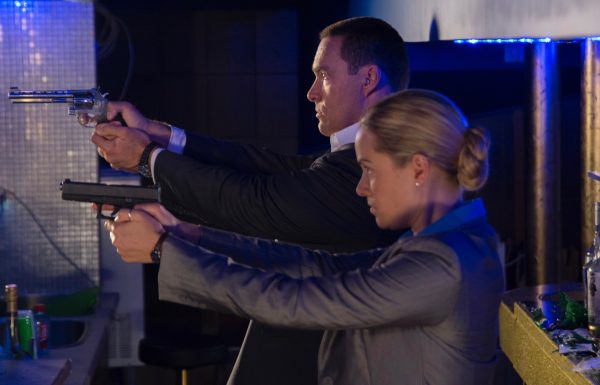 Kristanna Loken is best known for her roles in the films Terminator 3: Rise of the Machines, BloodRayne and Bounty Killer and on the TV series Painkiller Jane, The L Word and Burn Notice. Her latest movie is called Black Rose and is directed by and stars Alexander Nevsky. In the movie Kristanna plays Emily Smith, an LA cop on the hunt for a brutal killer.

She stops by The Action Elite to talk about the movie.

What appealed to you about your character Emily Smith in the movie Black Rose?

I liked Emily’s duality. She has a strong exterior, and a vulnerable internal world. She becomes very emotionally effected by the continued murders that are happening under her watch.

To get ready for this role you watched real videos of women being killed; was that the hardest thing you’ve had to do to prepare for a role?

How was it to work with Alexander Nevsky?

Alexander is a great guy. He was such a gracious host in Russia and is a true gentleman. I love his drive and his desire to succeed.

You’ve started your own production company called Trio Entertainment. What kind of projects do you look for with it?

In the beginning we will be focusing on thriller, suspense, movies with some action.  We also have a TV series on our slate in this genre as well.

Can you tell us about any upcoming projects you have upcoming with the company?

We are in development currently with two projects, likely beginning production with our first this summer. A formal announcement will be forthcoming.

How has becoming a mother affected the kind of movie projects you choose?

I would love to play a mother on screen, now having the experience of being one. As my son Thor is my top priority, shooting schedule and location play an important role in what jobs I take.

Has it changed the way you see the world in general?

Immensely. I feel like I am closer to the woman that I’ve always wanted to be. I am affected by Thor’s vulnerability in the most profound way. I experience a love like never before. Every choice and decision carries so much weight as it directly affects him, and through this awareness I can live more aligned with my true nature.

You’ve done a lot of work in the action genre; what is it that keeps drawing you back?

I enjoy it, and people seem to enjoy watching me do action so It’s a symbiotic relationship.

Do you think roles for women in the genre have improved or is there still a long way to go in terms of equality?

I like to celebrate the differences between male and female roles in action. Women don’t need to embody the male roles but rather embrace their feminine strengths and use them holistically in front of the camera. I don’t set out trying to be more male or feel less than, I just try to do the best job I can from my female perspective.