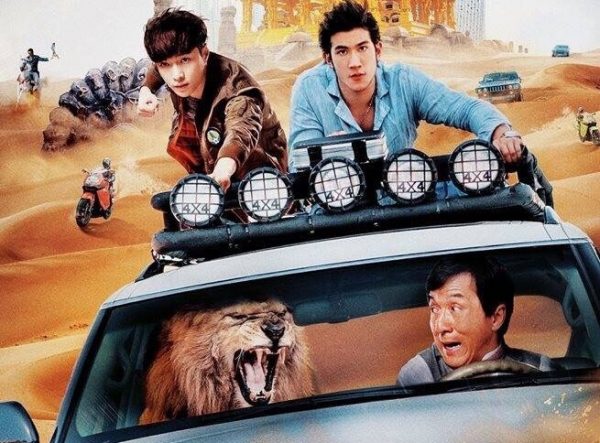 I found Kung-Fu Yoga to be pretty dismal and even ardent Jackie Chan fans will struggle to find something to enjoy.

Plot: Jack, a world-renowned archaeology professor, and his team are on a grand quest to locate a lost ancient Indian treasure when they are ambushed by a team of mercenaries and left for dead. Using his vast knowledge of history and kung fu, Jack leads his team on a race around the world to beat the mercenaries to the treasure and save an ancient culture in this breakneck action-comedy that reunites Chan with acclaimed director Stanley Tong.

Review: We all love Jackie Chan but even his most die hard fans have to admit that his recent output hasn’t been the greatest and I’m pretty sure that Kung-Fu Yoga is one of his weakest and silliest films to date.

I nearly turned it off during the opening scene which looked like it was put together using Playstation 1 Cut Scenes; that’s how poor the CGI was. If you make it through the first five minutes then the rest of the movie is an improvement but still overuses CG and the majority of the action is uninspired. It’s hard to believe this is from Stanley Tong, director of Supercop and Rumble in the Bronx which both had superlative action sequences but with this movie I found myself checking my watch wishing it would hurry up and end.

Jackie Chan is his usual likable self and I guess some of the fight scenes are at least pretty decent but everything between the action is cringe-worthy; a lot of the acting is amateurish at best from the supporting cast and the script & story are forgettable too.

It has several nods to Indiana Jones and even has a character called Jones (played by Aarif Rahman) but fails to have the thrills or memorable action scenes that make Indy such an icon.

I at least thought it was colourful and enjoyed seeing Indian actors in major roles especially Disha Patani who is one of the  most beautiful women I’ve ever seen. Sonu Sood is an entertaining enough villain but it’s a shame his climactic fight with Jackie turns into a dance sequence and is so anti-climactic. You can tell everyone is having a lot of fun making this movie but aside from a few funny moments it wasn’t fun to watch and I could never sit through it again.

Overall, you know I try to be as positive as possible with movies but I found Kung-Fu Yoga to be pretty dismal and even ardent Jackie Chan fans will struggle to find something to enjoy.