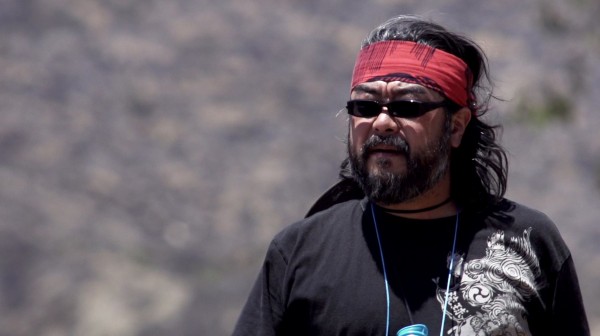 Samurai Avenger: The Blind Wolf rapidly became a cult classic and has recently been released on Blu-ray so writer, director and star Kurando stopped by to chat with us about the film.

Thanks very much for taking the time to talk with The Action Elite.

Thank you very much for the interview.

Samurai Avenger has recently hit Blu-ray courtesy of Synapse films; you co-wrote, directed and starred in the film. Which was your favourite aspect of the process?

I consider myself a film director. So hands down, directing was my favorite part of the SAMURAI AVENGER experience. I’m so happy that the genre aficionado giant like Synapse picked my film up for the Blu-ray release. And they did such a tremendous job making the ultimate edition of SAMURAI AVENGER: THE BLIND WOLF.

How did you come up with the concept?

My first feature film was called MONSTERS DON’T GET TO CRY and it was about a fictional high school shooting incident. A father who lost his daughter kidnaps the young shooter and does his revenge. I shopped it around but no American distributor picked it up. So I learned I have to do something Japanese to penetrate the North American market as a Japanese director. And I came up with the Samurai – Spaghetti Western hybrid concept and that became SAMURAI AVENGER.

Were there any scenes you had to cut that you regretted and if so can you tell us about them?

Fortunately, we didn’t have any deleted scenes. Our shooting schedule was so tight, we had to plan the production super lean and mean. So we absolutely did not have the luxury of shooting scenes that wouldn’t make the final cut.

I liked the brief voiceover ‘lessons’ telling us about the way of the samurai warrior; how much research did you do before writing the script?

I’m glad you enjoyed the voiceovers. All traditional Japanese Samurai TV serials had ‘voice-of-God’ voiceovers and I thought they were very effective, economical and an efficient narrative tool yet they have a very peculiar Kabuki-esque old worldly quality. So the moment I started writing SAMURAI AVENGER, I knew I would be using the voiceovers. As for research on the way of the samurai warrior, I have to say I didn’t have to do whole a lot. Believe or not, almost all the Samurai facts in the movie are common knowledge among my generation or older Japanese who grew up watching Samurai serials on TV and Samurai features in cinemas. I’d say only Kagebara – “Harakiri in secrecy” and Hakkotsukanso – “watch the loved one decay to achieve ultimate warrior enlightenment” were the hardcore stuff I learned by reading LONE WOLF AND CUB mangas.

How long did the shoot take and what kind of challenges did you face with it?

I believe the principal photography was 18 days and the 2nd unit shoots were 3 days so total 21 days. We went in to the production very well prepared thanks to my producer Chiaki Yanagimoto and her crew, so we didn’t encounter whole a lot of challenges. Of course, we dealt with all the normal ultra-low budget indie filmmaking challenges like not having enough time and money to do everything we wanted to do and so on.

The Hypnotist character played by Mariko Denda could be one of the greatest ideas in cinema history. How did you come up with that?

Thank you very much! I enjoy that character too. The idea for The Hypnotist came from LONE WOLF AND CUB: BABY CART IN PERIL’s heroine who puts huge tattoos on her breasts to distract her opponents with them. I took the idea further to add the hypnosis aspect to breasts and tattoos.

She needs a spin-off movie…

I like that! Maybe GUN WOMAN VS. THE HYPNOTIST!

Yes, I would totally watch that! Were there any moments that were improvised while filming or was it all in the script?

There were no improvisations in the movie. Since I was in front of the camera a lot, I storyboarded the whole movie and we tried to execute all the shots accordingly.

How was the process different from making Samurai Avenger and your recent feature Gun Woman?

I focused on directing on GUN WOMAN. I didn’t get in front of the camera so I could be more spontaneous and constantly find a better way to tell the story.

You were the main protagonist in Samurai Avenger but you didn’t act in Gun Woman; why was that?

My decision to play the title role on SAMURAI AVENGER was sort of forced upon me due to the lack of budget and resources. If I played the lead, that was one less person to pay, one less person to worry if he would show up on set on time and one less mouth to feed. And in hindsight, we couldn’t have finished shooting the movie if I didn’t play the lead. Whenever we were behind the schedule, we skipped shooting my coverage and moved on. But since I’m on set everyday, we were able to steal all my single shots anywhere and anytime. That’s how we caught up with our shot list by the end of the production. For GUN WOMAN, I really just wanted to focus on directing.

Samurai Avenger was very much open for a follow up; would you be interested in returning to the character again?

I really don’t have passion for acting anymore but I guess I have to play BLIND WOLF if the sequel is green lit. And I probably will enjoy playing him again.

I am gearing up to do my 4th feature this summer. It will be a martial arts movie. i can’t wait to start shooting it. I’m teaming up with my GUN WOMAN star Asami again for that. And I’m also prepping for my 5th feature that will star an acting legend from Japan.

Thank you and all the best with your future projects.

Thank you for the interview!  It was fun. I hope everyone catches the movie on blu-ray.