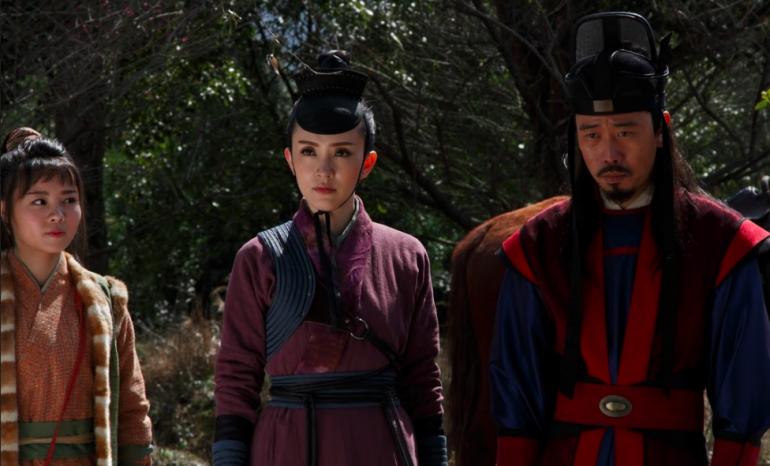 Lady Detective Shadow is an entertaining martial arts film with energetic fight scenes and a very appealing protagonist. I would love to see a potential sequel with a higher budget as that was this film’s major downfall making some scenes look amateurish.

Plot: Lady Detective Shadow sees its protagonist embark on a dangerous journey through the badlands of Ancient China, which is governed by the imperial houses and bandits alike. After several inexplicable brutal murders plague a remote desert area, the fierce and famous Lady Detective Shadow, Sima Feiyan, (Shang Rong) must use all her wit, wisdom and kung fu skills to find the murderers and instill justice. But as she delves deeper into the mystery, she soon discovers there is much more at stake than just another renegade killer.

Review: Produced by Bey Logan Lady Detective Shadow stars Shang Rong as Sima Feiyan who is essentially a female Sherlock Holmes that investigates crimes with her partner. Not only does Sima Feiyan have a cunning mind but she is not short on martial arts skills proving a fierce warrior as she investigates the various crimes of Ancient China.

Lady Detective Shadow wastes no time in getting going with fight scenes every few minutes which (despite the limited budget) are rather impressive. They are let down by the usual gravity defying wirework which I still find unnecessary and distracting but I’ve seen worse.

Shang Rong brings a quiet dignity to Sima so you never know what she is thinking but she is usually 2 steps ahead of her opponents. She thinks before speaking and is an immediately appealing character who I would like to see in future movies as this is clearly a potential franchise.

What the next movies require though is a larger budget as there are a few (but not many) moments of laughable greenscreen and CG, especially the “desert” scenes and any scene involving horses which look frankly pathetic and amateurish at best. I am a big supporter of indie cinema but sometimes it’s just sheer laziness; I mean you couldn’t find somewhere with real sand… like a desert? There are a few in the planet that I’m aware of and would have looked so much better than what was in the movie. Also why was there music from other movies used at various points? I’ve seen this before with a few Asian movies and a lot of people likely wouldn’t notice or care but I love my movie scores so I always do.

Anyway, that’s my gripes out of the way; Lady Detective Shadow still has plenty to enjoy with a story that contains several twists (even if the outcome is a little predictable about who the real villains are). Like I said there are fight scenes galore and despite the wirework they have a real energy to them and keep things moving along nicely so it’s never dull.

Overall, Lady Detective Shadow is a worthy introduction to an interesting character that is restrained yet badass and uses her wits as well as her fists and feet to solve mysteries. I would welcome a sequel with a higher budget as that was the major downfall of an otherwise entertaining production.