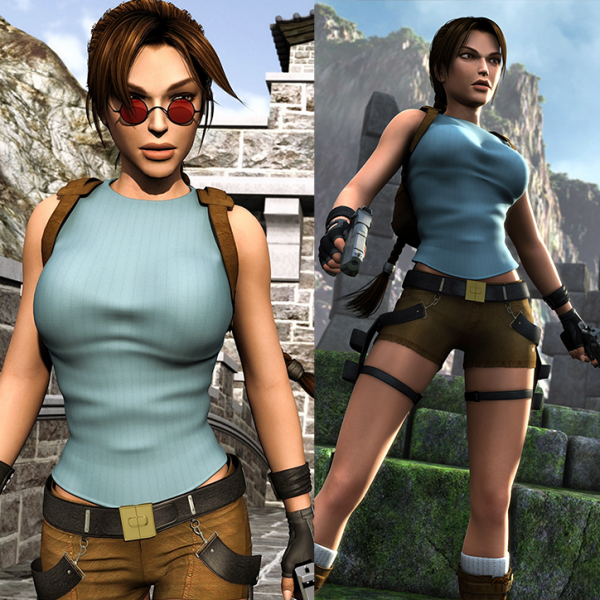 Lara’s Origins: The Birth of the World’s Best Tomb Raider

Dual pistols, an unforgettable English accent and a penchant for exploring musty mausoleums filled with relics the world over: Lara Croft is the quintessential tomb raider.

Since the days of the original PlayStation and Angelina Jolie taking on the big-screen role, the Tomb Raider franchise has hit mega popularity and become one of the best gaming mascots of all time. However, since the ass-kicking archaeologist received her most recent reboot and a 2018 film was announced, her origins have become a little foggy and her original design laid to rest.

Ms Croft even had a pair of online slots from 32Red released amidst her staggering popularity. While the gameplay isn’t quite the same as the PS1 titles (they feature Tomb Raider-themed spinning wheels as one might expect), the game still offers an element of mystery that is paired up with action shots of Lara. In addition to the slot games featured on 32Red, the franchise has also inspired similar thematic titles such as SlotZilla’s Throne of Egypt and The Twisted Circus. Such games are also featured on sites such as SpinGenie, which explains the rules a little more explicitly.

But going back to where it all started, we’re going to take a moment to look back on the original Lara from the video games and movies, to pay our respects to an absolute classic. This story starts alongside the beginnings of Sony’s first console, the original PlayStation. The first title released on October 25, 1996, and follows Croft around the world as she discovers fragments of an artifact called the Scion, an item crafted in Atlantis that holds immense power. After a struggle with the power-hungry ruler of Atlantis, Lara comes out victorious and escapes the area right before it explodes. None of this would be possible without Lara’s physical abilities, though, a topic not heavily explored in the early games. Besides the obvious physical prowess Croft has as far as scaling walls, parkour and acrobatic maneuvers we see from her, she’s also considered an expert fighter.

While it never fully fleshes out exactly which fighting styles she uses, we do see the protagonist in a white gi and black belt at one point, practicing her moves. From this, we can assume a form of karate or taekwondo is being used by the archaeologist alongside her unmistakable marksmanship. In this, agility is a tool heavily used by Lara and one of her main abilities to get her out of even the deadliest situations. The woman has fought mutants, velociraptors, centaurs, dragons and mummies to name a few, so we think it’s safe to assume she can handle herself.

This agile yet tough aspect was heavily showcased in the Angelina Jolie movie portrayal, Lara Croft: Tomb Raider. We see her first take on a training robot and then a collection of animated stone statues using a sword, some kicks and, of course, her trusty pistols while dodging a flurry of attacks along the way. While the movie might not be looked upon fans of the series now after all of the changes it has seen, it appears people at the time were interested to see the flick as it made $274 million worldwide, making it one of the fifth highest-grossing film adaptations of a video game to date according to Screen Rant.

The movie’s sequel didn’t sell quite as well as the original, but still has a place on the 15 highest-grossing adaptations of all time. It’ll only be a year until we see how the newest movie fares in comparison with the original pair of films, so we’ll be sure to keep our eyes out for the new adventure flick starring Alicia Vikander as the lead role.

Last but not least, the next console installment looks to release sometime in 2018 according to a post by Tech Radar. The article also shows concept art for the game, but just keep in mind much of the information is considered rumor, so try not to get your hopes up. What’s your favorite Tomb Raider release? Were you there in the very beginning back in 1996? Let us know in the comments below!