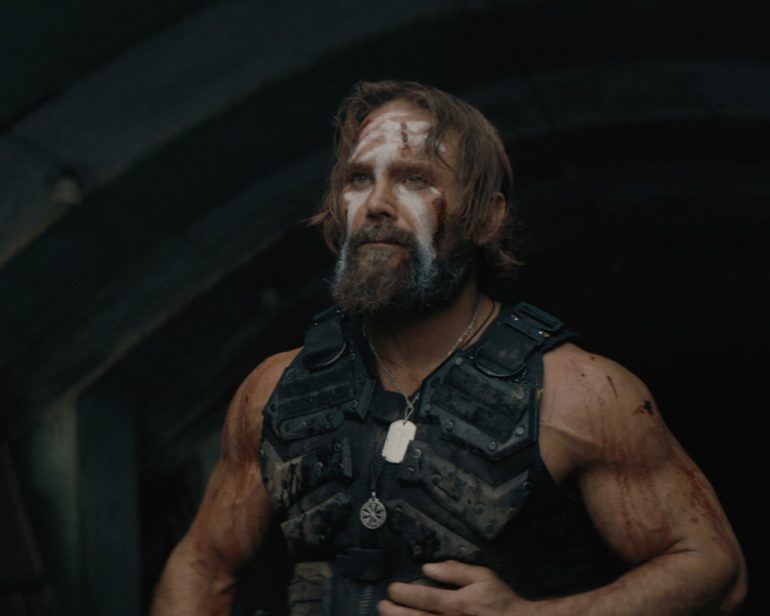 Last Man Down is a riot of an action movie with a huge bodycount and wonderfully corny one-liners just like the good old days. I found the ending sort of fizzles out and will always wonder how awesome this could have been with a bigger budget, but there’s always a sequel…

Plot: John Wood left the pieces of a broken civilization behind, to go back to his roots in the woodland, after a virus pandemic struck the world.

Review: *Mild spoilers ensue* I’d been meaning to watch Last Man Down for a while now but I finally caught up with it last night; this is very nearly a classic action picture and writers Fansu Njie, Daniel Stisen and Andreas Vasshaug clearly understand the genre they are working on.

Last Man Down is over the top, ridiculous fun and is like a throwback to movies like Commando. In early scenes of the movie we even see our hero John Wood (Daniel Stisen) carrying gigantic logs and lifting weights to demonstrate this is not someone to trifle with. He is a huge bear of a man who barely speaks but still manages to deliver one-liners whenever he kills someone which is something I have missed. He’s mostly out of breath and a lot of the time I can’t understand what he’s saying but it’s usually something badass.

Some of the acting isn’t the greatest but let’s face it that’s not a massive problem with movies like this especially when the cast’s first language isn’t English.

My main gripe with this movie is for the first half we get all this build up with John training and we are preparing for him to decimate his enemies (which he does) but this is the only review you’ll ever read that says this… I wish it was more violent. Considering this guy is so strong why does he keep getting his ass kicked in nearly every fist fight? I prefer my badasses near invincible and wanted to see him lifting up goons and breaking their backs on his knees (like Bane) or impaling them on trees while also giving us some exploding heads… but I guess it didn’t quite have the budget.

Olga Kent is also hard as nails as Maria whose blood contains the vaccine to a pandemic so this is very much a story for our times; if vaccines looked like her Covid would be long gone…

The music score is awesome even if it is a little over dramatic and there are times where you aren’t sure you’re meant to be laughing or not but that’s kind of why this movie is awesome. John Wood is just manly as fuck and not something we see much of anymore so I would love to see a sequel where he delivers on his promise of what a badass he is.

Overall, Last Man Down is a fun throwback to old-school action with the right amount of ridiculousness and badassery; it’s just a shame our hero gets beaten up so much and never really gets to crush his enemies in more satisfying fashion.