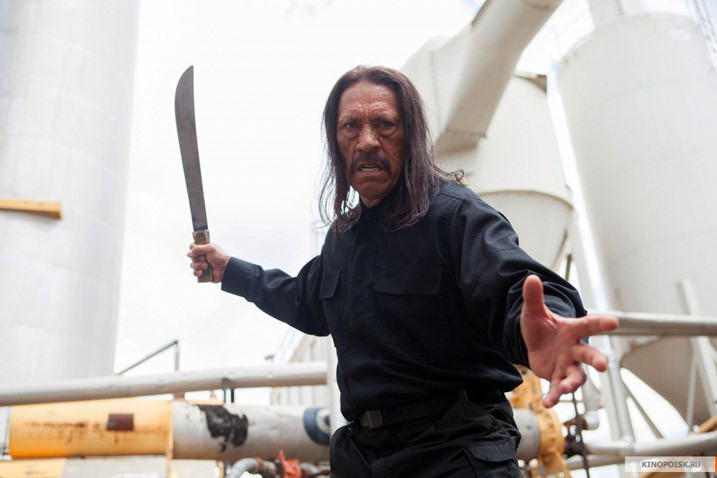 If ever there’s someone you could call an inspiration it’s Danny Trejo; He was a child drug addict and criminal, in and out of jail for 11 years who would end up finding redemption.

While serving time in San Quentin, he won the lightweight and welterweight boxing titles. Imprisoned for armed robbery and drug offenses, he successfully completed a 12-step rehabilitation program that changed his life. While speaking at a Cocaine Anonymous meeting in 1985, Trejo met a young man who later called him for support. Trejo went to meet him at what turned out to be the set of Runaway Train (1985).

Trejo was immediately offered a role as a convict extra, probably because of his tough tattooed appearance. Also on the set was a screenwriter who did time with Trejo in San Quentin. Remembering Trejo’s boxing skills, the screenwriter offered him $350 per day to train the actors for a boxing match.

Director Andrey Konchalovskiy saw Trejo training Eric Roberts and immediately offered him a featured role as Roberts’ opponent in the film. Trejo has subsequently appeared in many other films, usually as a tough criminal or villain.

The first role where he really came to my attention was in Desperado and it would be the beginning of a long working relationship with Robert Rodriguez. On a side note I only found out recently that Trejo and Rodriguez are in fact second cousins.

He would also appear in Desperado sequel Once Upon a Time in Mexico, however I do think I prefer Desperado. From Dusk Till Dawn had Trejo playing a vampire and the film proved to be a lot of fun with George Clooney playing his most bad ass role.

He would alos get to star in Michael Mann’s Heat alongside DeNiro and Pacino; rather than playing an out and out villain though, he was actually rather honourable and dare I say it likable.

Trejo got to play Johnny 23 in one of my favourite movies of all time Con Air where he plays a convicted rapist who gets his ass kicked by Nicolas Cage’s hero Cameron Poe.

If I write about all of his movies I’ll be here all day so I just want to mention a couple more; Bad Ass was out in 2012 and was inspired by a video of a an older guy beating the crap out of some loser on a bus. It was of course turned into an action flick where Trejo would play the title character and it would become one of my favourite roles of his.

Trejo would also have a rather small role in the underrated Predators but was sadly killed off after 15 minutes. The movie was produced by, yep you guessed it Robert Rodriguez.

His most iconic role was the lead in Robert Rodriguez’ Grindhouse homage Machete. He will also be starring in the upcoming sequel Machete Kills with a cast including Mel Gibson and Sofia Vergara. Apparently Gibson will be playing the villain which should be good times.

Trejo doesn’t look to be retiring any time soon and to get your own action franchise when you are in your 60s proves what a legend Trejo is and why any film he stars in is worth watching.