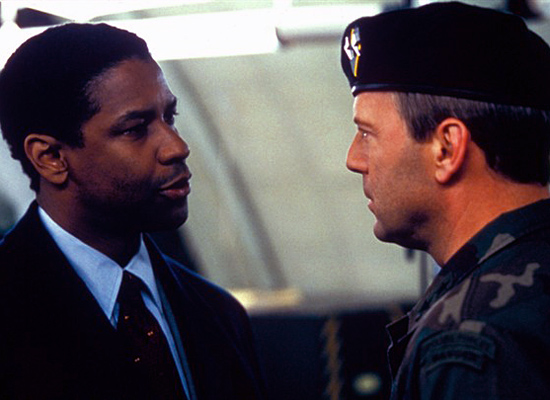 Although not seen as an “action star” per se, Denzel has starred in too many action classics to not be considered a legend. His work with Tony Scott in particular has cemented his name as an action hero.

I consider Crimson Tide the best of those films as the script, storytelling and performances are just without fault. You can also never go wrong with Gene Hackman, who is one of the all-time greats.

Unstoppable was hugely entertaining as Denzel starred alongside Chris Pine as two train workers who try to stop a runaway train… apparently it was stoppable though.

Man on Fire is seen as one of the best action movies of recent times and I’d probably agree; it was hard hitting and violent, but his character was sympathetic yet badass. I did find its pacing was all over the place and it took a while for it to get going. But, it was due to Denzel’s charisma that the film keeps your attention until the blood-soaked finale.

A good double bill recommendation would be Man on Fire and underrated action thriller Out of Time with Denzel and Eva Mendes. Both of whom starred in Training Day together. Although the story wasn’t amazing, it was nicely shot and the performances were excellent.

Denzel has lasted so long because of his sheer talent as an actor, producer and director. His roles are always varied but he always seems to veer towards more action oriented fare.

He worked with Russell Crowe in the underrated 1995 sci-fi actioner Virtuosity and despite getting poor reviews, the film is surprisingly cool. Russell Crowe was great as the bad guy and there was enough badassery to keep action fans happy.

Denzel has also worked with Tony’s big brother Ridley Scott on the mob movie American Gangster where he played real life criminal Frank Lucas, alongside Ridley favourite (and Virtuosity nemesis) Russell Crowe. This time the roles were reversed and Crowe was the good guy. The film was a critical and commercial hit proving that Denzel is great, even when he’s playing bad.

Of course, the first role where he played “bad” was in the crime classic Training Day as a corrupt cop on a downward spiral. Apparently King Kong had nothing on him and even led him to Oscar glory.

The first action movie I saw Denzel in was actually the 1991 classic Ricochet where he would be tested physically and mentally by John Lithgow’s nut job villain.

The film was directed by legendary Highlander director Russell Mulcahy and is briefly referenced in Training Day.

You see a photo of Denzel wearing his boxer shorts and holding a gun in a scene from Training Day, which of course we all know is from Ricochet.

One of my personal favourite Denzel films was the post apocalyptic movie Book of Eli where Denzel plays a mysterious man on a quest to deliver a certain book. In case you haven’t seen it, I won’t spoil anything. The movie was violent, sad and uplifting at the same time and has a classic music score provided by Atticus Ross.

Inside Man was another gem and proved to be one of Spike Lee’s better recent movies as it had a tense and unpredictable story. Clive Owen and Jodie Foster also co-starred, once again proving that Denzel is not only a great action star but a legendary actor.

In 2012 Denzel got to kick some ass again and practically reinvigorated the action genre with Safe House, which was the movie that made me actually start to like Ryan Reynolds. Despite some annoying shaky cam, the film moved along at a great pace and Denzel played his role to perfection. He kept you guessing right up until the end if he as either good or bad.

With more action movies on the horizon, (including an update of 80’s TV show The Equalizer) Denzel is showing no signs of slowing down and it looks like he will be pimp slapping King Kong for the foreseeable future.