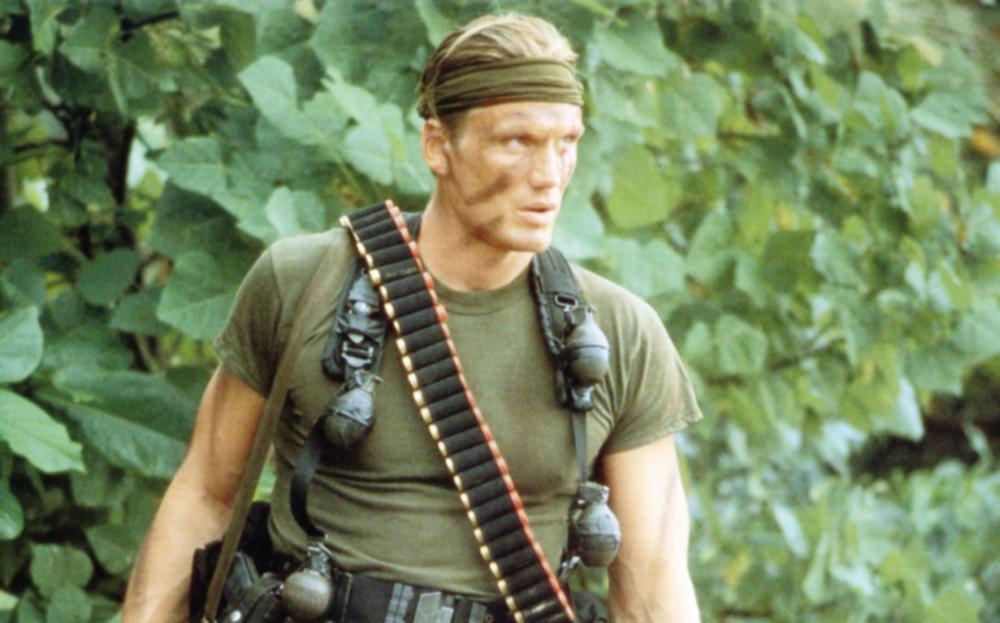 Dolph Lundgren was born Hans Lundgren on the 3rd November, 1957 and is a Swedish actor, director, and martial artist but you already know that. What you may not already know is that he is a trained Chemical Engineer and he went to University in Sydney, Australia.

While in Australia, he became a bodyguard for Grace Jones and they ended up ended up dating, which led him to getting his first acting role in the 007 movie A View to a Kill.

It would be the little known (sarcasm) character of Rocky Balboa who would make Dolph an action star in the 1985 classic Rocky IV. Dolph plays Ivan Drago and goes toe to toe with Rocky after killing Apollo Creed in the ring. Widely regarded as the best in the series, Rocky IV made Dolph Lundgren a household name and he’s been one of the biggest action stars ever since.

In 1988 he would star in the interestingly plotted Red Scorpion, which has really become an action classic; any movie where the last line is “Fuckin’ A” is aces in my book. The last 20 minutes of the film turns into Rambo with some great action and smashy smashy.

His interpretation of the Marvel character The Punisher was widely reviled, despite the fact it actually kicks quite a lot of ass with some awesome action scenes.

He would go on to star in action classics like Showdown in Little Tokyo with the late Brandon Lee, which was directed by Mark L. Lester (Commando) and is a personal favourite of mine.

In 1992 he would star in one of the all-time great action movies: Universal Soldier alongside Jean-Claude Van Damme, which would end up being regenerated (ho ho) in 2010’s Universal Soldier: Regeneration.

Joshua Tree (or Army of One as it’s known in the US) also starred George Segal as a corrupt cop who frames Dolph’s character for murder. I really enjoyed this movie, however upon watching it recently I noticed a glaring error in it. If you watch one of the car chase scenes you can actually see the camera crew in the reflection… nice. It still has some great one man army moments (thus the title) and is a satisfying movie. It also has the classic line “I never said I was running for Pope.”

In 2010 he would have a return to the big screen in the Sylvester Stallone directed film The Expendables; Yeah, I’ve never heard of it either. In 2012 Dolph returned in The Expendables 2; this time Gunnar was a good guy and he had some of the best lines of the movie.

Earlier in 2012 he starred in Stash House, which was produced by After Dark Action. The company came along at just the right time as the action genre was declining and have produced several new action movies featuring Dolph, Scott Adkins and JCVD.

Universal Soldier: Day of Reckoning had strong reviews and was a ballsy different direction to take the franchise. John Hyams confidently directed Regeneration and Day of Reckoning with hard as nails fight scenes and Dolph back on fine form.

One in the Chamber was Dolph playing one of his coolest characters alongside Cuba Gooding Jr and Dolph blew the Oscar winner off the screen. The movie had some decent action and was a lot of fun.

His most recent movie The package with Steve Austin was a great little action movie with some great fights and Dolph was at his best as the villain.

Dolph has starred in over 48 movies and is showing no signs of slowing down: action fans can rest easy that Dolph Lundgren will be keeping action alive for a good few years yet.