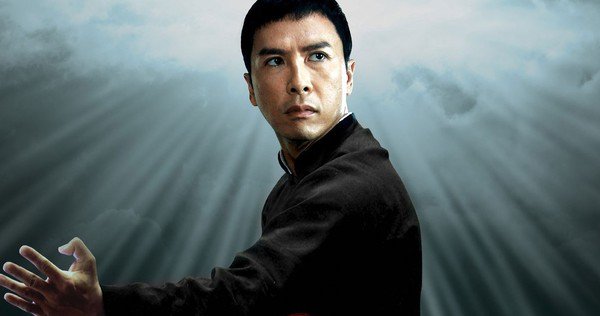 I won’t lie; I’m a relative newcomer to the world of Donnie Yen and I’m ashamed it took me so long to see his movies.

Yen started out as a stuntman until he got his first acting role in the 1984 film Drunken Tai Chi.

His now iconic role as Wing Chun grandmaster Ip Man is what he is best known for but he has been in many other martial arts classics: Flash Point, Hero (alongside Jet Li), Iron Monkey and many more.

Yen’s success in Ip Man has apparently led to an increase in the number of people taking up Wing Chun, leading to hundreds of new Wing Chun schools to be opened up in mainland China and other parts of Asia.

According to the always reliable Wikipedia Ip Chun, the eldest son of Ip Man, even mentioned that he is grateful to Yen for making his family art popular and allowing his father’s legacy to be remembered.

Yen is versed in boxing, kickboxing, taekwondo, Muay Thai, wrestling, Brazilian Jiu-Jitsu , Judo, Wing Chun, and Wushu. Seen as one of the most popular film stars in Asia in recent years, Yen is currently one of the highest paid actors in Asia.

One of the things which separates Yen from other action and martial arts stars is his quick smile and gentle face. He could destroy you in seconds but look utterly at peace.

Yen was rumoured to be in The Expendables 2 but allegedly turned it down; to this day I am disappointed about that and I would love to see him in more mainstream Hollywood action fare.

This year he has already starred in Special ID and Iceman and shows no signs of slowing down any time soon. He has several movies in the pipeline including a sequel to the hugely successful Crouching Tiger, Hidden Dragon. In the upcoming Kung-Fu Jungle he plays a martial arts instructor from the police force that gets imprisoned after killing a man by accident. But when a vicious killer starts targeting martial arts masters, the instructor offers to help the police in return for his freedom.

Iceman 2 is also currently in the works as well as The Master and Dragon City. The story to The Master sounds rather intriguing: A martial arts expert opens a school and publishes self-help books to make a living. But when a person is killed in a street fight after reading the self-help books, the expert ends up in a feud with the victim’s father: a gun shop owner.

Dragon City tells the tale of a cop who assembles a special task force to battle criminals and corrupt cops inside the infamous Kowloon Walled City. Sounds like a rather cool Men on a Mission story so it looks like Donnie Yen is going from strength to strength.