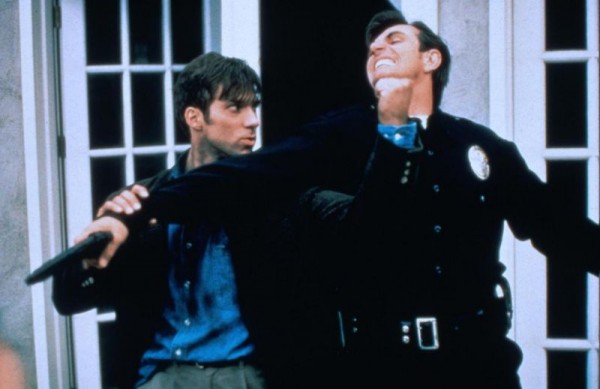 Gary Daniels was born in London, England and was inspired as a child by Bruce Lee. He would grow up to score 34 knockout victories, and become a World Light-heavyweight Kickboxing Champion.

Daniels would go on to become an actor with small roles in movies like Deadly Bet and Ring of Fire but he would get his first starring role in Capital Punishment which would open up more roles like Full Impact, American Streetfighter and Firepower. It would be 1995’s Fist of the North Star which would really make his name as the next action hero.

My personal favourite film of his is Recoil, directed by martial arts legend Art Camacho. The opening 20 minutes is a stunning car chase and the action remains outstanding until the end credits. I remember being blown away by what was achieved with such a low budget.

I also really enjoyed Bloodmoon with Darren Shahlavi on fine form as the over the top villain; it had some amazing fight scenes and is a lot of fun.

He played videogame character Bryan Fury in a live action movie version of Tekken; the movie was hit and miss but his fight scenes were first rate.

It was great to see him in The Expendables in 2010 as a bad guy and his climactic fight scene with Jason Statham and Jet Li was the stuff of legend. He also played a villain in the Steve Austin actioner Hunt to Kill which was a fun throwback to Rambo-style movies of the 80’s.

He has several projects coming up with director R. Ellis Frazier, who as I mentioned the other day is one of the most visual directors working in independent movies today.

The first is Misfire where he plays a hardened DEA agent called Cole, who descends into the dangerous underworld of Tijuana, Mexico in search of his journalist ex-wife who he believes has been abducted by a charismatic Cartel boss with aspirations for public office.

Then comes Bullpen Fight Club where he plays an aging and injured former MMA champ that is forced back into a deadly Mexican underground fight circuit to save is girlfriend who is kidnapped by a mysterious cartel leader and criminal mastermind. With a pimp from Los Angeles extorting him and a Cop from Mexico City on the search for the infamous criminal mastermind, Delgado, David Goran finds himself deep in trouble in Mexico. As he fights his way out, he and the Mexico City Cop finally find out who is behind the infamous Bullpen Fight Club, where fighters fight to the death to save themselves and their loved ones.

If you want to see Gary doing something a little different then check out Across the Line: The Exodus of Charlie Wright. He stars alongside Luke Goss, Andy Garcia, Aidan Quinn and Mario Van Peebles and really demonstrated there is more to Daniels than simply kicking ass.

One we’re all excited about is Zero Tolerance where he stars alongside Scott Adkins, Kane Kosugi, Dustin Nguyen and Ron Smoorenburg. In this movie two former para-military operatives, Johnny and his police detective friend Peter, search Bangkok to find the killers of Johnny’s beautiful daughter Angel – Leaving carnage and retribution throughout city.

Not sure how big a part Gary or Scott have, but from the trailer, it looks like it’s going to be pretty awesome.

Gary will also be in Skin Traffik as a jaded hit man who regains his humanity in this dark tale of redemption and sacrifice, set amidst a brutal underworld in which daily survival is not so much a skill but an instinct.

So many action stars have come and gone over the years but Gary’s career has been constant and with his recent role in The Expendables introducing him to a while new generation of action fans, it looks like we can enjoy watching him kick ass for several years yet.