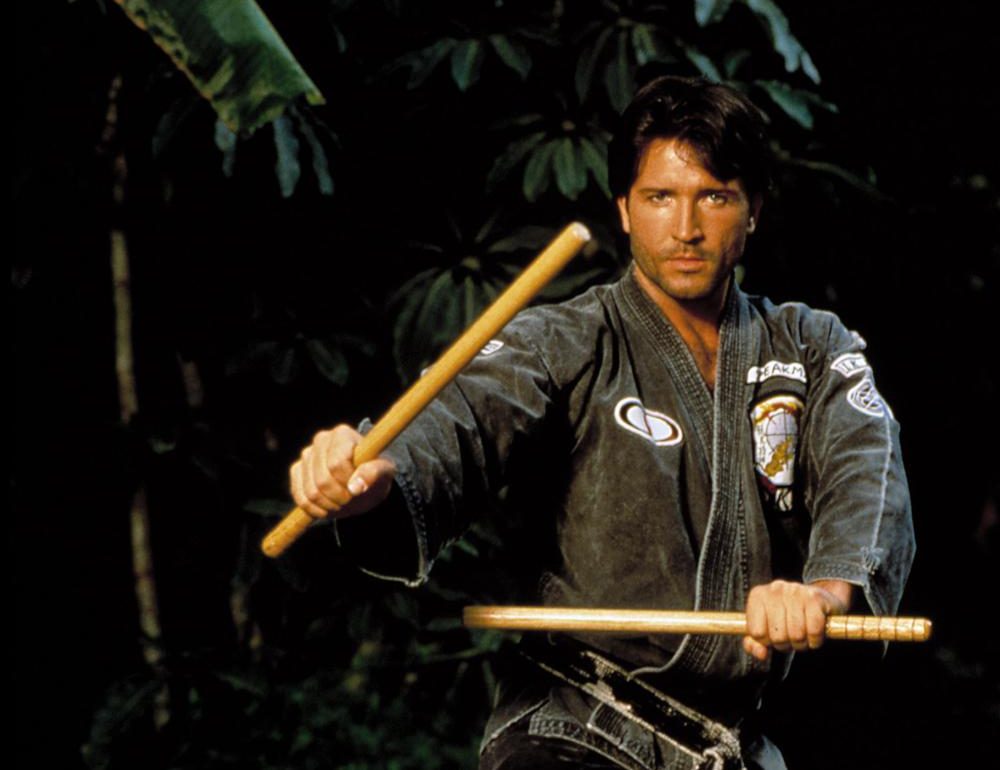 Jeff Speakman hasn’t been in that many films but I think he’s certainly earned the title of “Action Legend”.

His roles in The Perfect Weapon, The Expert and Street Knight proved that he had what it took to be an action star but he is also the creator of American Kenpo version 5.0.

According to Speakman’s official site Kenpo 5.0 is the “hybrid of the last generation version of American Kenpo taught directly from Senior Grand Master Ed Parker to Jeff Speakman and ground fighting brought into the equation by several of Mr. Speakman’s students training and experiences as well as Mr. Speakman’s continued studies of Brazilian Ju Jitsu from his instructor Mr. Todd Nathanson.

It is important to recognize that this is not grappling or cage fighting but an expanding philosophy of Kenpo to produce the Kenpo ground system coupled with training drills and sparring techniques. It is modifying the existing 4.0 system while remaining completely within the combat models and thinking of American Kenpo to address the increasing and prevalent void of ground fighting in the Kenpo world. By keeping within these models of Kenpo we have been able to develop a system combining the better of these two worlds to give our students the maximum ability to deal with the very real possibilities of becoming involved in these kinds of altercations. In addition, it allows us to continue to develop ourselves within the mind-body-spirit paradigm to reach a higher level of individual performance and sustained excellence therefore strengthening the group as a whole.”

Check out just some of his martial arts credits below courtesy of IMDB:

The Perfect Weapon set him up to be the next action hero and he brought something a little different to the martial arts genre too.

In this great scene below I always liked how the bad guys all attack at once; in so many martial arts movies or fight scenes you have one at a time which I always thought felt very fake, so he deserves props for this great dojang beatdown.

Speakman’s next film Street Knight didn’t come out for another two years and sadly many of his films would go straight to video; they still managed to be hugely entertaining for the most part and he was never less than watchable.

You’ll remember our man david j. moore chatted with Jeff a while back about the role that got away; here’s an excerpt below:

“We were engaged in it – they hired a writer for a lot of money, and he was doing a lot of rewrites to make it a Speakman movie, and in the middle of that the interim head of the studio put that script in turnaround, which is when they take scripts and put them out there to other studios and say, “Hey, look, we’ve put two hundred thousand into this script and we don’t want it – if you pay two hundred thousand you can have it.” It sort of becomes available. The next day after this guy did that, all of us – my legal guys and my agents – jumped on the phone and called Paramount and said, “What the hell are you doing?! This is Speakman’s movie. We picked it! You picked it! You gave it to us and you’ve already spent $250,000 hiring a writer to make it a Jeff Speakman movie! What the hell are you doing?” The guy who was temporarily running the studio was like, “Oh, shit! Sorry! I fucked up, let me go get it back.” Fox bought it. He could not get it back. They would not sell it back to him. They made that movie, which was supposed to be my second movie at Paramount, and the name of that movie was Speed.

It was the movie that made Keanu Reeves a star. We were rewriting it so that the bus would stop and Speakman would have to get off the bus and fight guys and get back on the bus – we were doing all that. We lost it. And consequently, there went my career.”

That’s really unfortunate as it would have made Speakman a household name but he’s still made a decent impact on the genre and thankfully Jeff is about to come back to movies after a battle with cancer and he is fighting fit once again. His next film is entitled Lido and is apparently going to be his return to the big screen.

You can check out david j. moore’s full interview with Jeff Speakman here.