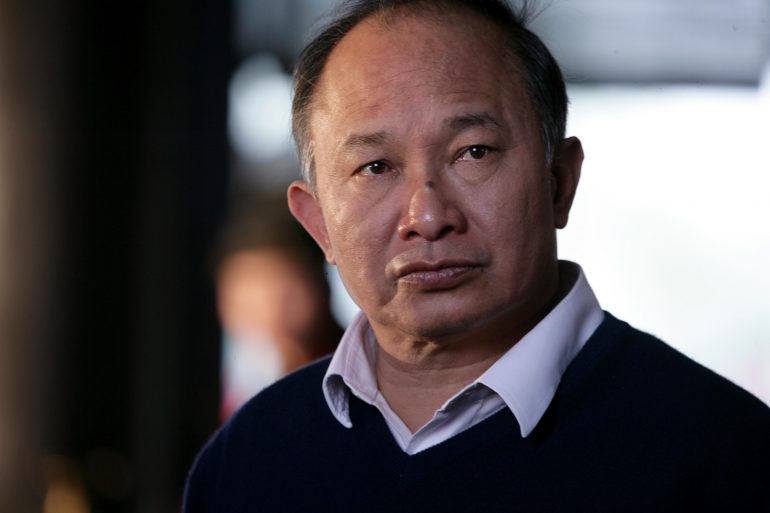 I can’t believe it’s taken me this long to write this dedication to arguably the greatest action director of all time. John Woo has directed so many classic action movies: Hard Boiled, The Killer, A Better Tomorrow, Face/Off, Hard Target, Mission: Impossible 2, Broken Arrow and many more.

John Woo basically created a movie genre called “Heroic Bloodshed” in the late 80’s/early 90’s,  nearly all starring Chow Yun-fat. They typically focused on men bound by honour and loyalty with plenty of the old ultra-violence thrown in for good measure. He’s always been a HUGE influence on Tarantino.

Woo gained international recognition with the release of The Killer (1989). Widely praised by critics and audiences for its action sequences and acting, The Killer became one of the most successful Hong Kong films and garnered Woo an American following.

His last Hong Kong film before moving to the United States (briefly) was Hard Boiled (1992).  It has a bodycount higher than some real life wars and has some pretty disturbing violence. Strangely, it did not match the success of his other films but is still easily his best in my book. The action scenes were spectacular and Chow Yun-fat has never been cooler.

When Woo moved to the States he experienced difficulty in cultural adjustment while contracted with Universal Studios to direct Jean-Claude Van Damme in Hard Target. According to Wikipedia, “Woo was unaccustomed to pervasive management concerns, such as limitations on violence and completion schedules. When initial cuts failed to yield an “R” rated film, the studio assumed control of the project and edited footage to produce a cut “suitable for American audiences”. A “rough cut” of the film, supposedly the original unrated version, is still circulated among his admirers”. I have the European Cut and it is a lot more hardcore than the US version.

Woo would then direct John Travolta and Christian Slater in Broken Arrow. A frenetic chase-themed film, the director once again found himself hampered by studio management and editorial concerns. Despite a larger budget than his previous Hard Target, the final feature lacked the trademark Woo style. Despite a middling box office, the film is hugely entertaining with John Travolta stealing the show and Hans Zimmer’s classic action score providing an awesome theme tune.

Paramount Pictures offered the director significantly more freedom to exercise his speciality on his next project, which is widely regarded as his masterpiece: Face/Off. With genuine emotional characterisation and spectacular action scenes, the film still remains a classic of the genre. It was a story of two adversaries who surgically alter their identities: Cop John Travolta and terrorist Nicolas Cage play a cat-and-mouse game, literally trapped in each other’s skin.

Face/Off opened in 1997 to critical acclaim and huge box office with grosses in the United States exceeding $100 million.

John Woo has made three additional films in Hollywood: Mission: Impossible II, Windtalkers and Paycheck. Mission: Impossible II was the third highest-grossing film in America in 2000, but received mixed reviews. I still regard it as the best in the franchise with amazing action scenes, great music and an old-school action feel. His other two US movies Windtalkers and Paycheck fared poorly at the box office and were summarily dismissed by critics.Both movies are still worth watching though as they are not without entertainment value.

Woo then moved back to Hong King and has made a few Historical Epics and some more features with Chow Yun-fat. Hollywood is not the same without him and I would love for him to come back and do a big budget action movie like he used to. Alas that will never happen as the industry has changed and not for the better.