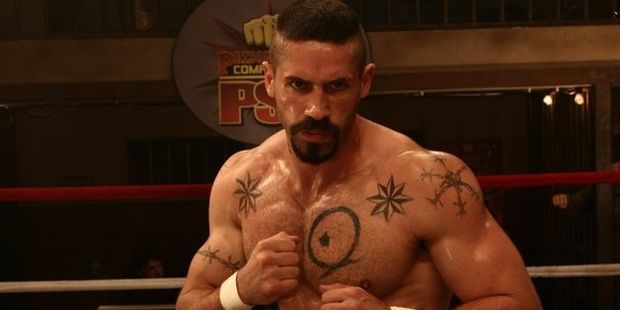 OK, someone please tell me why this man isn’t in every blockbuster? Not only is he a great fighter but the man can act and has great charisma. Watch Undisputed 2 & 3 with a side order of Ninja and you’ll see what I mean.

Scott Adkins can transform himself into a role; Boyka in the Undisputed sequels is quite frankly iconic and has now developed a huge fan base. The character has a code of honour which he even displays in the second movie where he’s the villain. When he finds out that Chambers was drugged before their fight, he is furious as he is an honourable warrior. This was a great touch as it showed that despite being this imposing and terrifying force of nature, he has standards.

As I’ve said before, the Undisputed movies are very well written and although they have amazing martial arts, the story arc for Boyka especially is well drawn out. In the second movie he is the villain (mostly) but the character spends the third movie finding redemption. Only an actor with Adkin’s physical prowess and acting ability could pull off a difficult role like this. It must have been great fun to film.

Although his role in The Tournament wasn’t huge, he was practically unrecognisable in the role. It also manages to be one of the best action movies of the past decade. Hand to hand fights, car chases and explosions galore. If this was the 80s/90s it would have made $100 mil…

I recently read an interview with him where he discussed his disappointment with The Shepherd: Border Patrol in which he starred along with JCVD. Apparently JCVD wasn’t interested in doing any martial arts in it and Adkins was saddened that the film was a missed opportunity.

I still enjoyed the movie and think it’s entertaining enough. It was directed by Isaac Florentine who also directed Undisputed 2/3 and Ninja so they clearly have developed a great working relationship since.

Adkins has reteamed with JCVD several times in Assassination Games and the upcoming Universal Soldier sequel. After the greatness of Regeneration I look forward to seeing what they come up with this time.

Next week sees Adkins in a new actioner with Christian Slater in After Dark Action Film’s “El Gringo”. From the trailer the film looks to be a kick-ass, hard R action fest, so sign me up!

Thankfully, we can rejoice that Adkins has a role in Expendables 2 this summer and word round the camp fire is he gets to fight Statham at the end. I personally can’t wait. I hope it makes him the A-List star he deserves to be.