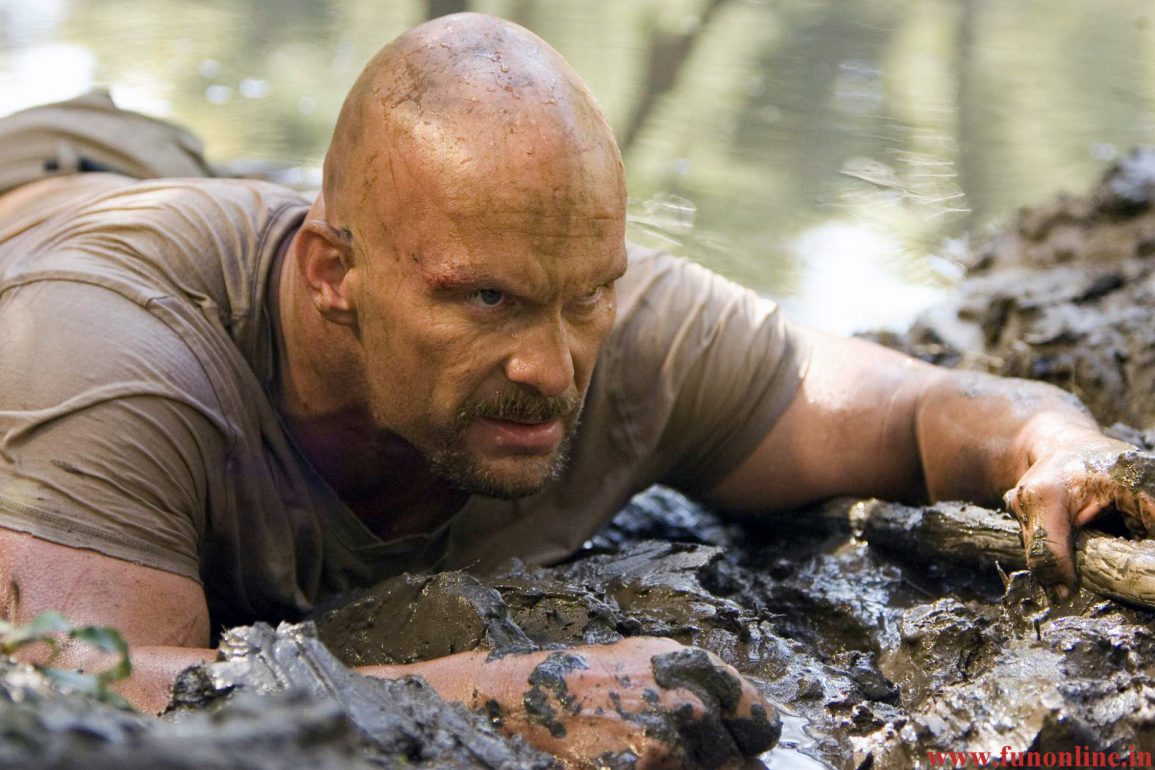 After a few other ventures, he moved over to the action movie genre and the next action hero was born. He had a role in the Adam Sandler movie The Longest Yard before his first big leading role in (my personal favourite) The Condemned. He starred alongside Vinnie Jones as a convict forced to fight to the death with 9 other convicts on an island. The Condemned was a Hard R action movie with some hardcore and exciting fight scenes; Vinnie Jones’ character was a sadistic bastard and I consider this his best acting role. It must be great fun to play such an evil swine and he looks like he relishes every moment.

Steve Austin got to show off his fighting prowess and demonstrated that he has real on-screen charisma.

He then starred in 2 straight to DVD movies Damage & The Stranger; I really enjoyed Damage as the characters were well written and Austin was very sympathetic in the role, while kicking plenty of ass.

The Stranger wasn’t amazing, but it did have some good fight scenes and the story was pretty interesting. The most important thing about these movies is they solidified Austin’s role in his next film: The Expendables, you may have heard of it.

There isn’t much to say about The Expendables that we haven’t talked about before, but Austin got to play his first villain role and did a great job of being scary as hell. He has a fantastic fight scene with Sly Stallone and it looks like they genuinely took lumps off each other. He then finished off with a punch up with Randy Couture… which didn’t end well for Austin.

His next film was Hunt to Kill which was a throwback to the classic actioners of old like First Blood and Commando. The villain was hilariously over the top and the action kicked some ass. We also have a mini Expendables reunion with Eric Roberts and Gary Daniels showing up for good measure. Grab a few beers and check this one out as it’s the kinda film we’re all about on this site.

2011 was a busy year for Austin as he starred in 3 movies: Knockout, Tactical Force and Recoil. Knockout was more of a family movie but still has its moments. Tactical Force (originally titled Hanger 14) was another 80’s throwback and I was lucky enough to interview director Adamo Cultraro last year and get the behind the scenes scoop. The film had some choice one liners and considering its meagre budget, had plenty of action. Oh and we also get the shouting police chief thrown in for good measure.

Recoil is another personal favourite of mine, where Austin starred alongside bad ass for hire Danny Trejo.  Austin plays Ryan, an ex-cop out for revenge after the brutal murder of his family.

It was well paced with some good fight scenes; once again it was a straight-to-DVD flick so the action is small but that’s no bad thing. It’s mostly hand to hand combat, which is my favourite type of action scene. I’d definitely recommend checking it out.

In the coming year Steve Austin will be starring alongside Dolph Lundgren in the actioner The Package. The plot is about a courier for a local crime lord who must deliver a mysterious package while being chased by a horde of unusual gangsters.

Austin will also star with Steven Seagal in Maximum Conviction where a former black ops operative Tom Steele (Seagal) and his partner Manning (Austin) are assigned to decommission an old prison, they must oversee the arrival of two mysterious female prisoners. Before long, an elite force of mercenaries assault the prison in search of the new arrivals. As the true identities of the women are revealed, Steele realizes he’s caught in the middle of something far bigger than he had imagined.

So, it looks like Steve Austin will be providing us real action fans with some great actioners over the next year and long may it continue. It’s good to know that there is someone else who wants to keep old school action alive.