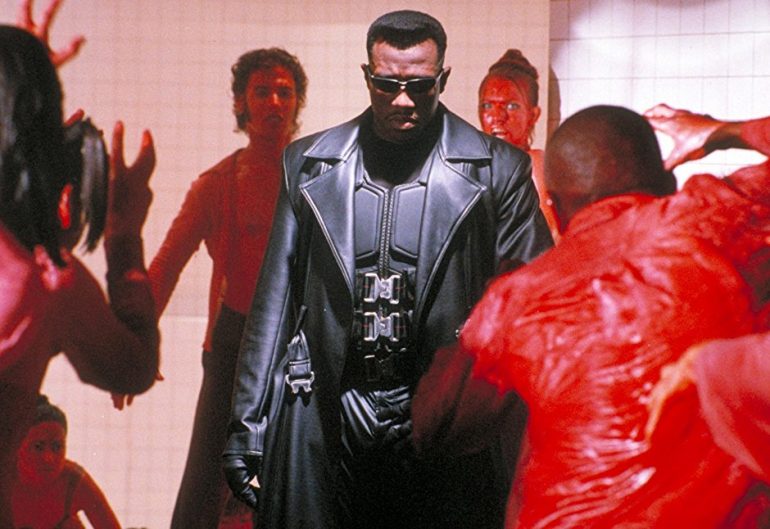 Wesley Snipes made his film debut in the 1986 Goldie Hawn movie Wildcats. Later that year, he appeared on Miami Vice as a drug-dealing pimp in the episode “Streetwise”. I first noticed him when he starred with Michael Jackson in the Martin Scorsese-directed music video “Bad”. That same year, Snipes was also considered for the role of Geordi La Forge in the TV series Star Trek: The Next Generation, but the role eventually went to LeVar Burton.

Snipes was offered a small role in Spike Lee’s Do the Right Thing but turned it down for the larger part of Willie Mays Hayes in Major League, beginning a succession of box-office hits for Snipes. Lee would later cast Snipes as the jazz saxophonist Shadow Henderson in Mo’ Better Blues and as the lead in the interracial romance drama Jungle Fever. He played the drug lord Nino Brown in the classic New Jack City, which was written specifically for him by Barry Michael Cooper.

Although Snipes is better known for his roles in action films, he has also had success in comedies like White Men Can’t Jump, and To Wong Foo, Thanks for Everything! Julie Newmar where he played a drag queen alongside Patrick Swayze and John Leguizamo.

I consider Demolition Man one of his very best films; the action is spectacular but it also demonstrated Snipes’ darkly comedic side as his character Simon Pheonix was remeniscent of The Joker. An anarchist and criminal who just enjoyed hurting people and blowing stuff up. It remains a classic of the action genre and is also one of my favourite Stallone movies.

Passenger 57 was incredibly cheesy and yet it is one of the most quotable movies you’ll ever see with such classic lines as “Always bet on black!”. It was essentially another Die Hard clone but is great fun and worth watching on a Saturday night.

Drop Zone is another personal favourite as it has some great aerial photography and an amazing score by Hans Zimmer.

One of his more underrated movies was Boiling Point where he starred alongside Dennis Hopper. The film was more of a character piece and deserves a watch as it’s something really different.

Snipes worked with the late, great Tony Scott on The Fan and although it was a Pacific Heights style stalker thriller, it was beautifully shot and showed Snipes could play dramatic roles just as well as his ass kicking roles. He doesn’t even beat anyone up in it.

In 1998, Snipes had his largest commercial success with the Marvel movie Blade. The film turned into one of the most successful R-Rated franchises and really made Snipes a household name. The third movie Blade Trinity was widely derided by fans and is considered the weakest of the trilogy. Snipes later said that he had to endure racism on the set, which pretty much killed any chance of him portraying the character again.

Like so many of the great action stars of old, most of Snipes’ latest films were released straight-to-DVD and he went several years without a big box office hit.

Snipes was originally slated to star in Spike Lee’s 2008 war film Miracle at St. Anna but had to leave the film due to his widely publicized tax problems; his role eventually went to Derek Luke.

Snipes also had to turn down the part of Hale Caesar in The Expendables because he was not allowed to leave the United States without the court’s approval.This explains why Terry Crews ended up in the film, considering he was never really an action star.

Snipes was also offered the role of Nick Curran in Basic Instinct 2 but turned it down because of commitments on another film. I think he got off lightly considering the final product wasn’t exactly great.

Word around the camp fire is that he has spoken with Sly Stallone about a part in a sequel to The Expendables, so fingers crossed he gets a part in Ex 3.

I don’t want to focus too much on his prison stay so I’ll just say that on December 9, 2010, Snipes reported to federal prison to begin his three-year sentence for his tax problems. Snipes is being held at McKean Federal Correctional Institution and is scheduled for release on July 19, 2013.