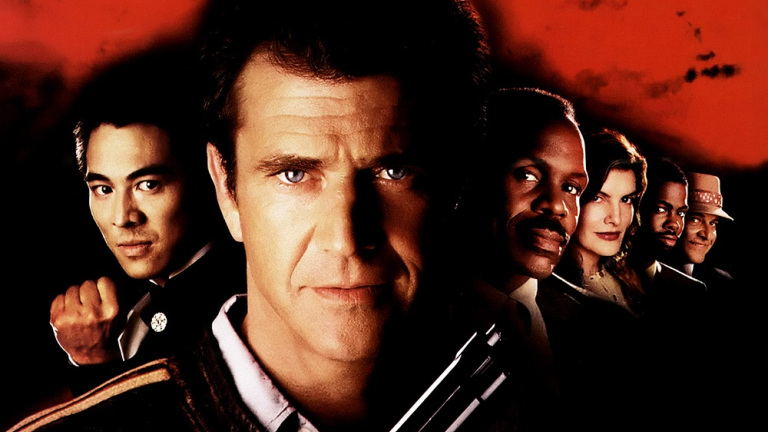 Lethal Weapon 4 may not be as sharp as the pervious entries and the formula was getting a little stale but Jet Li is a welcome addition and there is enough action and humour to keep you entertained.

Plot: Detective Riggs (Mel Gibson) tries to settle down with his pregnant girlfriend, Lorna (Rene Russo), while his partner, Murtaugh (Danny Glover), comes to grips with the marriage of his pregnant daughter, Rianne (Traci Wolfe), to fellow cop Butters (Chris Rock). But they find themselves and their families targeted by Chinese mobsters, led by Wah Sing Ku (Jet Li). Riggs, Murtaugh, Butters and private eye Getz (Joe Pesci) decide to go on the offensive before the gangsters get to their loved ones.

Review: So we come to the fourth and final Lethal Weapon film; up until now Martin Riggs (Mel Gibson) hasn’t really cared about life much less his own until in the explosive opening scene of this movie. He and Murtaugh (Danny Glover) take on a lunatic with body armour and a flame thrower who is destroying a street. During this showdown Riggs finds out Lorna (Rene Russo) is pregnant and he’s going to be a father; Murtaugh also discovers that he is going to be a grandfather (his daughter Rianne is pregnant), but he doesn’t know who the father is. This conversation is going on while all Hell is breaking loose and it’s in this moment that a wave of calm washes over me as I think… the boys are back in town.

Now Riggs has to become a responsible adult as he has a wife and kid to look after; he is also dealing with getting older where he isn’t as physically capable of chasing down the bad guys as he once was. Roger has made peace with his age so almost becomes more like a mentor to Riggs preparing him for the fact that youth doesn’t last forever. Riggs still loves to play juvenile pranks on Roger humiliating him any chance he gets but it’s all done with love.

The latest addition to the ever-expanding cast is Chris Rock as Detective Butters; the running joke is that no one remembers his name and they call him everything except Butters. He has a few funny rants and his scene with Leo where they just shout about how phone companies are screwing you over provides a few laughs.  What Roger doesn’t know is that Butters is the father of Rianne’s child and everyone is keeping it secret from Roger; it’s a pretty dumb plot idea and gets tedious rather quickly.

Poor Roger’s house has the worst luck and this time it gets completely burned to the ground and you can’t help feeling he is a bit of a shit magnet.

It’s funny when you go to Rotten Tomatoes and look at those candy ass critics who whine about the violence in this movie; there is no such thing as too violent and thankfully The Action Elite is here to praise the carnage and bodycount… which is actually pretty tame compared to more modern fare.

I think most can agree this is inferior to the other entries as the script isn’t quite as tight and the absence of Shane Black is noticeable; it’s hardly terrible though with several funny moments but it also has some heartfelt scenes too. Who would have thought Leo would have the most tear-jerking scene of the film? Once again, I remember Leo being more annoying than he is and after watching the entire series I can say that he didn’t really bother me at all.

Jet Li is the primary antagonist Wah Sing Ku who has about three lines of dialogue, but he still manages to be a worthy foe for our two aging heroes. There is no depth to his character whatsoever but there doesn’t need to be; he is the bad guy and they don’t always need big backstories. The fact he smiles when hurting and killing people is enough to know this is not a good person.

I always found it funny how Riggs and Murtaugh take him on for the final fight when in reality Jet Li would destroy them within seconds but that would make for a short and disappointing film. They do get their asses severely kicked however, and you’ve never seen them so bloody and bruised by the end.

Keep your eyes peeled for James Lew, Roger Yuan and Jeff Imada who all show up; Cory Yuen was also involved with the martial arts choreography which is why it looks as slick as ever.

There is another awesome car chase but the scenes without Jet Li are a little less interesting as we’ve seen so many other chases by this stage. I liked that Riggs is constantly struggling to keep up with the bad guys and mentally he is as tough as ever but his body just can’t keep taking the constant abuse.

I do miss R-rated blockbusters like this with heaps of violence and most importantly great characters with personalities. There has been talk recently of a fifth movie but I think I would leave it; this movie ended perfectly and watching Gibson and Glover chase bad guys around a retirement home doesn’t sound particularly thrilling.

Overall, Lethal Weapon 4 is arguably the weakest entry of the franchise but it’s still a damn good time with Jet Li’s scene stealing villain, a few nice character moments and spectacular action scenes making for a fitting end to the series.