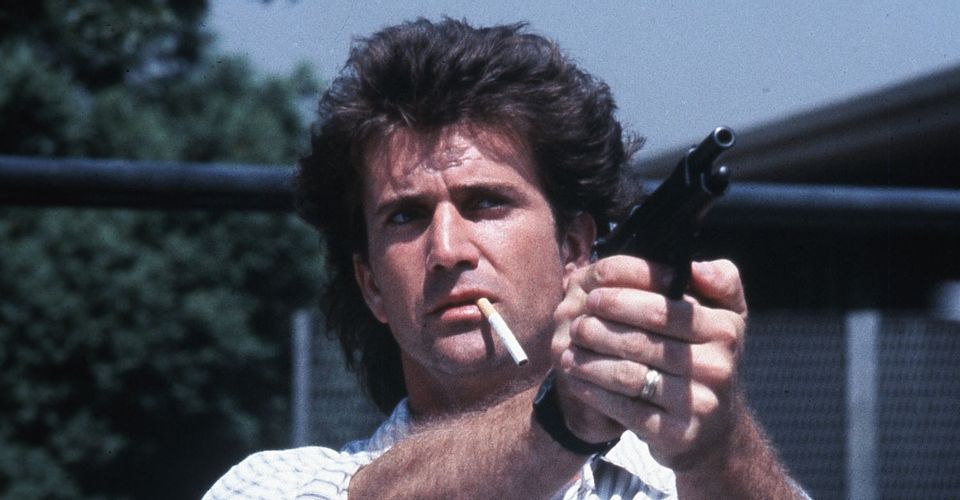 Lethal Weapon perfected the buddy cop genre and is one of the greatest action movies of all time with the Director’s Cut only adding to it. I know some prefer the second entry but personally this is and always will be the best of the series.

Review: We’ve done various pieces over the years on the Lethal Weapon films but I’ve never done proper reviews for them especially the Director’s Cuts but that all changes today as I am going to review all four movies over the next week. I know the fourth movie doesn’t have a Director’s Cut but I’ll cover it anyway.

Lethal Weapon is one of the all-time classic action movies with Mel Gibson and Danny Glover making for an iconic on-screen duo; it’s a must-watch at this time of year and makes for a perfect double bill with Die Hard. I always thought it would be awesome if they took place in the same cinematic universe so we could potentially see McClane, Riggs & Murtaugh taking down bad guys together but that only ever happened in my mind.

Mel Gibson is at his absolute peak in this movie capturing the right amount of craziness, humour and pathos all at once as Martin Riggs who is literally suicidal after the death of his wife; I think the scene where he is in his trailer with the gun in his mouth is one of the most gut-wrenching moments of any action movie. We can see he is a man on the edge but as he says himself it’s the job which keeps him going.

When he is partnered with good natured family man who plays by the book Roger Murtaugh (a sympathetic and likable Danny Glover) the two are polar opposites in terms of personalities and where they are in their lives, but their adventures slowly bring them together. The Murtaugh family are immediately appealing with natural dialogue making them all feel like real people.

I love how Lethal Weapon isn’t all about the action and gives us time to get to know the characters and the way Riggs and Murtaugh’s partnership develops is simply flawless. This is due to Shane Black’s sharp script and Richard Donner’s tight direction. There are some hilarious one-liners, but it doesn’t overdo the comedy keeping everything grounded.

The supporting cast is another who’s who of 80’s action with Al Leong, Tom Atkins, Ed O’Ross and Sven-Ole Thorsen all showing up. Mitchell Ryan makes for an enjoyable villain, but we can all agree this is Gary Busey’s show. He excels as the mysterious Mr. Joshua who holds lighters under his arm to prove how tough he is. This is one of his most legendary roles and his final showdown with Riggs is still gratifying to watch; admittedly the fight would likely never happen in real life but this isn’t a documentary, it’s just an action movie and it requires a final fight for proper closure. The fight incorporates Capoeira and Jiu Jitsu; with the rain and floodlights it comes across as chaotic and dirty as fights in real life tend to be and is one of the best throwdowns of the franchise.

The action scenes are all well executed and Lethal Weapon still holds up with nothing looking particularly dated. A highlight is the desert sequence when Riggs and Murtaugh attempt to rescue Roger’s daughter Rianne from the villains, but it doesn’t go to plan. Just the way it builds up with Michael Kamen’s score and the helicopter swirling the dust everywhere it really escalates the tension to breaking point. We also get several shoot-outs and chases to keep the pacing exciting.

Personally, I prefer the Director’s Cut over the theatrical version, mostly due to the sniper scene which demonstrates how reckless Riggs is but he is also still damn good at his job. He shows no regard for his own safety but is happy to die to save some endangered kids. There are some extra character moments too like Riggs losing it in his trailer and breaking the TV then later buying a new one. We also see Roger at the shooting range where his hand shakes a little but he manages to stop it proving that he might not be too old for this shit after all. The scene with Riggs asking the prostitute to come home with him just to watch the Three Stooges is also a nice addition as it shows us just how lonely he is.

Michael Kamen’s score is one of his most popular although I have to admit I do find the saxophone a bit much at times; I still love the guitar which we all know is necessary for any awesome action picture.

It’s too bad the below scene wasn’t put into the Director’s Cut as it’s just another great Riggs moment and we also get to see Jeff Imada too. Norman D. Wilson also plays the barman who shows up again in Lethal Weapon 3 as Fast Eddie.

Overall, the Lethal Weapon: Director’s Cut only improves the movie giving us some extra character moments and the now classic sniper scene so I couldn’t go back to watching the theatrical cut again. The performances, script and action are all first rate so it’s easy to see why this is still a classic of the genre and a must-see for the Christmas period.