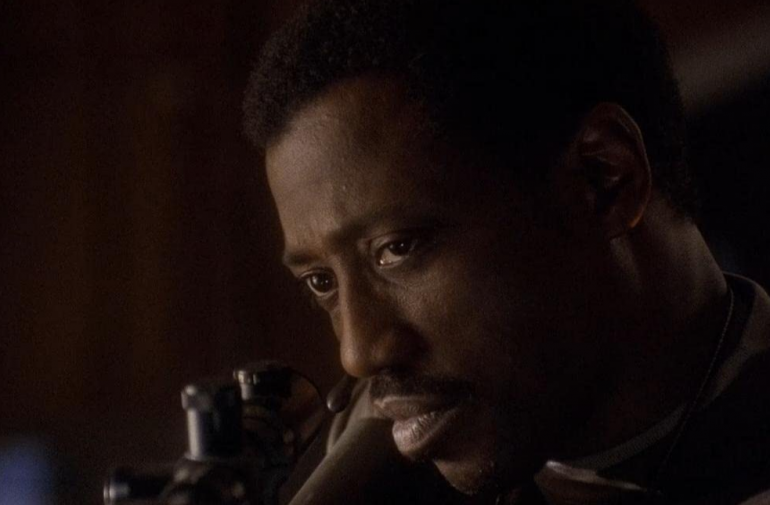 Liberty Stands Still isn’t exactly a surge of adrenaline but it’s never less than engaging with first rate performances from the entire cast. It has enough action and depth to keep viewers entertained but this is more about the characters rather than set-pieces.

Plot: As the heir and current marketing director for one of the nation’s biggest gun manufacturers, Liberty Wallace (Linda Fiorentino) is indifferent to the atrocities made possible through her business and her CEO husband, Victor (Oliver Platt). On her way to see her actor lover, Liberty ends up chained to a food cart full of explosives — all at the insistence of “Joe” (Wesley Snipes), a sniper whose young daughter was a victim of gun violence, and who now has Liberty in his sights.

Review: Liberty Stands Still stars Linda Fiorentino, Oliver Platt and Wesley Snipes and as many have said before it would make for an entertaining tension filled double bill with Phonebooth.

This isn’t exactly action packed and has no fight scenes but it reminds us what an awesome actor Wesley Snipes is and how he really needs to be in more big budget fare. Snipes plays a grieving father whose daughter was killed by another kid in school with a gun so one day he takes a woman called Liberty (Fiorentino) hostage at a hot dog stand who is the wife of a gun manufacturer. The hot dog stand contains a bomb and Snipes’ character “Joe” has a sniper rifle pointed at her if she tries to flee or alert anyone. He forces her to confess the shady business dealings of her husband while exposing others in the government.

This movie is all about the 2nd Amendment in the United States and the right to bear arms; Joe wants the various senators he sees as responsible for the death of his child to be held accountable and is even willing to die for it. We aren’t really offered any solutions to the arms debate so best not to focus too much energy on that and just take it as an entertaining action drama.

Linda Fiorentino is phenomenal as Liberty forced to face her demons; she cheats on her husband and isn’t an especially sympathetic protagonist however, as it goes on we do feel for her as she is in a near impossible predicament.

Keep your eyes open for Hart Bochner (Ellis from Die Hard) who plays Hank Wilford; he’ll always be Ellis to me but he was well cast as a cop trying to figure out what is going on.

It’s a well paced and taut 96 minutes and the climax is suitably chaotic with a few bombs going off and a genuine sense of panic from the public.

It’s not exactly feelgood fare and leaves you with nothing but the performances are all solid making it at least a one-time watch.

Overall, Liberty Stands Still may not be packed with wall-to-wall action but it’s still quite tense with the cast all at the top of their game; Linda Fiorentino especially shows what an underappreciated talent she was; she did one more film after this then disappeared from movies, at least on an acting basis.