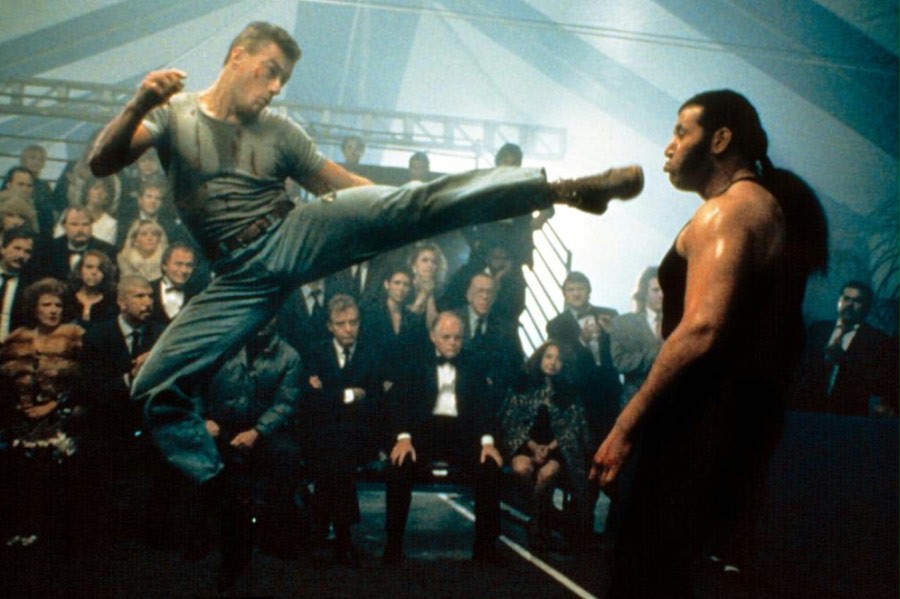 Lionheart is a JCVD classic and if you’re a fan of his movies then pick this up; you won’t be disappointed.

Plot: Lyon Gaultier is a deserter in the Foreign Legion arriving in the USA entirely hard up. He finds his brother between life and death and his sister-in-law without the money needed to heal her husband and to maintain her child. To earn the money needed, Gaultier decides to take part in some very dangerous clandestine fights.

Review: Jean-Claude Van Damme stars in this classic martial arts movie which has multiple titles around the world from A.W.O.L.: Absent Without Leave, Lyon, Lionheart, Wrong Bet, Full Contact to End of the Line. Growing up it was always called A.W.O.L. but as I have the North American Blu-ray and DVDs I’ll just call it Lionheart from now on.

Van Damme plays Lyon, a Legionnaire who deserts his post when he hears that his brother has been killed. The film then goes in a different direction; you expect him to be out for revenge but that isn’t the case. He ends up fighting for money to help support his brother’s wife and daughter.

Lionheart has some great fight scenes; once again directed by JCVD favourite Sheldon Lettich. The acting is pretty good as well; you really sympathize with Jean-Claude’s character Lyon and root for him from the start. He’ll do anything he can for his family and he’s very much a man of honour; I can safely say that for once the little kid in it isn’t annoying and is almost, dare I say it, likeable.

I always loved the score to this movie; it’s inspiring, uplifting and hearkens back to Rocky and although a little over the top, it still makes me want to go to the gym and work out.

Harrison Page plays Joshua, a street hustler who Lyon teams up with after Joshua realizes Lyon has some serious talent. He is essentially a mixture of Mickey Goldmill and Paulie who has Lyon’s back (most of the time) and just feels like he is authentically from the streets; they make for a great team and it’s too bad the much discussed Lionheart 2 never came to fruition.

There isn’t really a primary antagonist but the final opponent for Lyon is Attila, who only appears for the climactic fight scene but he is imposing as Hell and the fight is incredibly satisfying. When Lyon is down and nearly out, he crawls over to his friend Joshua who says that Lyon should stay down because all the money is on Atilla. Spoiler alert – Lyon looks up furious and says “Wrong Bet!”; he then proceeds to triumph over his adversary and we all cry a little.

The real villain is the fight promoter Cynthia (Deborah Rennard) who only really cares about making money; her henchman is also played by the always great Brian Thompson from Cobra, Terminator, The Order and many more.

Keep your eyes open for Billy Blanks who Lyon fights at the beginning; this is also a Kickboxer reunion with Michel Qissi (Tong Po) playing Moustafa one of the men sent to bring Lyon back to the legion.

Lionheart is well paced, but I noticed since buying the US DVD that this version is a little shorter than the UK release. This is also the same for Hard Target and Kickboxer; there were several scenes I am very familiar with but they just weren’t in these movies.

Upon investigating further, there are several different versions of the movie and all of them have different footage; some with less/more violence. So if you’re looking to watch the full uncut version of Lionheart, I’d maybe check out the French (Region 2) version.

Overall, Lionheart is a JCVD classic and to this day remains one of my favourite movies; it has heart, excitement and people getting punched in the face regularly so really, what’s not to love?