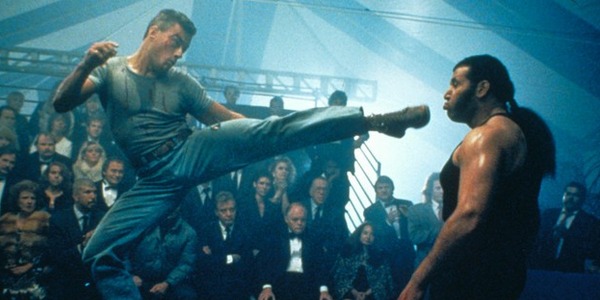 We’ve known for a while that Lionheart 2 was in the works but Jean-Claude Van Damme has taken to his Facebook page and announced that it will be filming at the end of the year which means we can expect to see it in 2019.

That’s not all though; the long delayed Full Love will finally be getting its premiere at the Toronto International Film Festival this Fall… I live in Toronto so guess I’ll just have to be there.

Oh you think that’s all? Nope! The man himself will also be at at the 2018 Cannes Film Festival in France, to present his new movie ‘The Bouncer’ and also a movie called ‘Blood and Land’.

Here is the full synopsis for The Bouncer: Lukas is a nightclub bouncer in his fifties. A man who’s taken punches, literally and figuratively – who has been living on the edge for too many years.

He strives to grow his eight-year-old daughter, Sarah, with the little money he earns. When he is out at night, Sarah stays with the concierge, Therese, a nice lady in her sixties. Every morning, Lukas takes Sarah to her primary private school. They’re often late. And he’s got a few months due… They manage, though.

But one day, things take a twist: Lukas loses control during an altercation with a client he almost kills. He is immediately arrested and charged by the police. Lukas’s future is in jail. His daughter will be placed under the care of social services. Unless…

Trabelsi, Interpol, comes to visit Lukas in prison with an offer: the incident could be ignored, Lukas could even keep the custody of his daughter. All this, in exchange for one service: come and work for Interpol to trap the chief of a Dutch gang operating from Belgium. Left with no choice, Lukas accepts the deal and begins his mission. He starts working as a bouncer in Jan’s club and is soon used as a henchman by the Dutch gangster. As a member of the gang, Lukas is caught up in a spiral of violence – stuck between a paranoid Jan and a cop obsessed with results.

In the process of handing over Jan to Justice, Lukas becomes close to Lisa, a sultry young lady who works for the gang as a money counterfeiter. He commits himself to a dangerous love affair with her, who does not imagine him being an undercover officer. As the mission gets close to its end, Lukas finds himself isolated and threatened: Jan is suspecting someone and Trabelsi turns out to be a dirty cop!

Isolated, Lukas will have to fight to stay alive, to protect his daughter and his life.